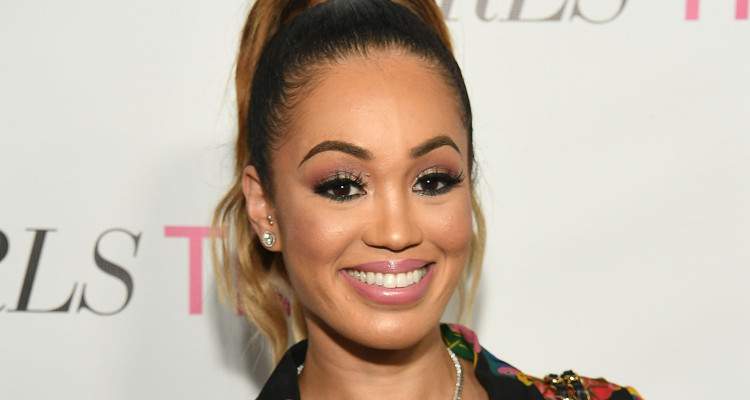 We can’t help but admit that Telli from WAGS Atlanta is bound to be a fan favorite. She’s a dynamic combination of a badass businesswoman and caring mother. Get to know more about her in Telli Swift’s wiki.

After the gigantic success of WAGS LA and WAGS Miami, WAGS Atlanta is the new addition to showcase the lives of the hottest and most powerful sports couples in Atlanta. The women are not just drop-dead gorgeous, but also ambitious and successful. Telli Swift is one of them. She’s strong, beautiful, and successful. Telli Swift’s boyfriend, Deontay Wilder is quite a man himself. He’s a world champion boxer and the type of guy any woman would love to have.

Telli Swift’s age is 30, while Deontay Wilder is 32. The couple are expecting their first child; Telli’s second, and Deontay’s fifth. While Deontay is a world champion boxer, Telli is preparing to launch a lifestyle app this year.

The couple have been together for the past three years, and Telli is Deontay’s support system in every way. She’s not just his girlfriend but also his personal caretaker. According to Tello, “Deontay is my job. I’m his stylist, I’m the chef, I’m the maid, I’m everything. Well, I’m a nurse. So, I can help him heal, recover and everything else. Prior to Deontay, I was a nurse here in LA, so I guess that’s what makes it work for him. Being that he’s never lost, I don’t have to worry much. He doesn’t get hit too much, so I don’t worry unless he does and that makes it easier for me.”

Money knows no boundaries for this lady —especially when it comes to caring for her man. It wouldn’t be wrong to say that the same ideas reciprocate on Deontay’s end.  In an interview she revealed, “For his birthday on Oct. 22 I threw him a surprise party in Atlanta and he had a custom cake with Louis Vuitton boxing gloves. I got him exactly what he asked for which was a silk Versace robe. For my 30th birthday he bought me a Bentley, which is my dream car, so that’s the least I could do for him. He’s the boss.” Wow. Well, we’re speechless!

Walking into 2018 like … catch @bronzebomber and I and #keyNtelz @keshadenise along with the rest of the cast on the premiere of @wags Atlanta tomorrow night 10/9c on @eentertainment!

I don't work in no office, but they copyin' and that's facts though.?

WAGS Atlanta is definitely going to be full of excitement! Telli can attest to that: “There’s a lot of pettiness going on. There’s one who’s openly sexual, the girl who lies too damn much, we have a Southern belle, of course, we have a beauty queen too. Then there’s me who everyone feels like I’m super boujee and I’m pampered because I’m from LA and they’re all from the south.” Well, well, well, drama awaits! Watch as it unfolds as WAGS Atlanta premieres Wednesday, January 3, 2018 at 10:00 p.m. EST on E!.