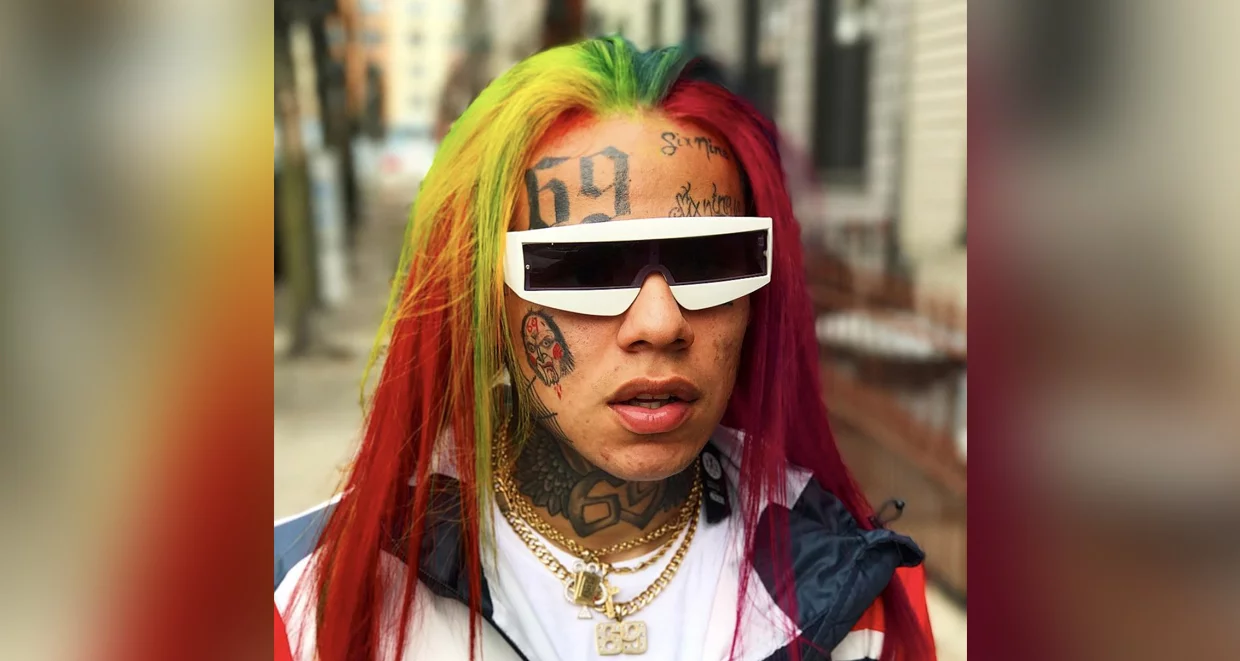 Even though Tekashi69’s age is just 21, he is already a name to reckon with in the fast-moving world of rap. With six singles and his debut mixtape charting on the Billboard charts already, Tekashi69 has raised expectations that he is a future star in music. His brushes with the law are threatening to come in the way, but Tekashi69 is busy doing what he loves—making music. Keep reading to know more about this colorful rapper.

Tekashi69, who is also known as Tekashi 6ix9ine, is the new kid on the hip hop block. But the rapper has already made a name for himself with his music and brushes with the law. He has several hit songs to his credit like “Gummo,” “Kooda,” and “Gotti” and have already hit the Billboard Top 100 chart.

While rumors are circulating that Tekashi 6ix9ine is gay, nobody has come forth with any credible proof on this matter. What is documented, however, is his making sexual contact with a 13-year-old girl way back on February 21, 2015. He had pleaded guilty to one felony count of use of a child for a sexual performance.

You’re going to want to learn all about that and more, so here are some details from Tekashi69’s wiki.

Born on May 8, 1996, in Bushwick, New York City, to a Mexican mother and a Puerto Rican father, Tekashi 6ix9ine’s age is 21. He attended school until the eighth grade when he was expelled, and never returned.

The rapper’s real name is Daniel Hernandez, but he is better known by his stage name, 6ix9ine. He is also known as Tekashi69 or simply Tekashi.

Tragedy struck Tekashi69’s family when his father was murdered in 2009. Tekashi69 was just 13 years old at that time.

I'm gonna cut my hair because it changes colors everytime I wake up & it's starting to talk to me ??‍♂️ THANK YOU TO ALL THE SUPPORT IM RECEIVING ? MY FANS IS ALL I THINK ABOUT EVERY SECOND OF THE DAY ??

The household was in dire need of money to sustain itself, so Tekashi69 started working different jobs and even sold marijuana to help his mother financially. He worked as a busboy, worked at a bodega, and sold weed to earn extra money for his family.

Music Is His Airplane

Alone and isolated, Tekashi69 turned to music for comfort. He discovered that he had a talent for writing and rapping lyrics and creating unique music.

Even though Tekashi69 went on to become a rapper, his early musical influences were not other rappers. He grew up listening to heavy metal groups like Parkway Drive and All That Remains. But later on, he was inspired by rapper RondoNumbaNine, and he jumped into the rough and hyper-competitive world of rap and hip-hop.

Tekashi69 came into the public eye thanks to a July 2017 Instagram post. His colorful and weird appearance, including his multi-colored hair, a rainbow grill, and multiple versions of 69 tattooed all over his body, turned him into an Internet meme.

Tekashi69’s early music, including singles like “Yokai” and “Hellsing Station,” got him noticed. He became known for his well thought out music videos, which featured colorful outfits, visual effects, and themes. And although he made them on a small budget, they propelled him forward towards his success.

Serving Everybody a Notice

But it was Tekashi69’s songs that made people take him seriously, especially when he released his commercial debut single, “Gummo,” on November 10, 2017. The single went to No. 12 on the U.S. Billboard Hot 100 chart and eventually went platinum.

The rapper’s next single, “Kooda,” also appeared on the Billboard charts, followed by his third single, “Keke.” People then sat up and started paying attention to him.

Tekashi 6ix9ine’s lyrics tend to be explicit and angry but are hard-hitting and connect with his fans who are from different ethnic backgrounds.

If there were still any doubters of Tekashi’s raw talent, they were silenced by the his fourth single titled, “Gotti.”

These singles only made the rapper’s fans hungry for more. And, Tekashi69 did not disappoint.

Critics praised the album and The New York Times said that it was innovative and different from hip-hop’s current norms and sound.

Thanks to his album and singles sales, live concerts, and performances, Tekashi69’s net worth is estimated at $400,000. In addition to that, he owns jewelry pieces like necklaces and wristbands reportedly worth hundreds of thousands of dollars.

It hasn’t been all smooth sailing for the rapper over the years. He has been in serious trouble with the law for a while now.

In 2015, Tekashi distributed videos online of an incident that occurred on the night of February 21, 2015, where he had sexual contact with a 13-year-old minor. The girl was having sexual intercourse with another accused named Taquan Anderson while Tekashi69 was touching her in a sexual manner.

The law took action, and in October 2015, Tekashi69 pled guilty to one felony charge of “use of a child in a sexual performance.” But in November 2015, he claimed that he had “no sexual contact” with the girl and did not know she was a minor. He also claimed that he was 17 years old at that time although records showed that he was 18.

Tekashi69’s rape charges were serious and could have well landed him in prison at that time as his position was already weak. He had already served jail time when he was a minor for assault and selling heroin.

Under his plea deal, Tekashi69 had to obtain his GED, not post any sexually explicit or violent images of women and children on social media, and not commit any other crime for two years. If he met these requirements, then he would be given three years probation and not be registered as a sex offender. However, if he did not meet any of these conditions, he could face up to three years in prison.

According to reports, Tekashi69 had failed his GED test and did not appear in court on April 10, 2018, but this wasn’t the case. The hearing was postponed because the court did not have an official copy of the rapper’s GED results.

Another controversy that has dogged Tekashi69 for a while has been claims made by his ex-colleague and fellow rapper, Trippie Redd, saying that he is a pedophile and a closet homosexual. Redd even posted a picture of Tekashi69 holding hands with another man in November 2017.

The matter got out of hand when Redd was staying at a New York City hotel and was assaulted by a few individuals allegedly connected to Tekashi69. Since then, both Tekashi69 and Redd have continued to abuse each other on Instagram Live.

Not Serious about Relationships

Nothing much is known about Tekashi69’s personal life, although he has said that he has a daughter.

FOLLOW YOUR DREAM ‼️‼️‼️FEBRUARY 23RD DAY69 TAPE DROPS‼️‼️ FIRST EVER TEKASHI PROJECT ??? WE ALL START FROM SOMEWHERE ‼️‼️ THEY HATE ON YOU AND DOUBT YOU BECAUSE THEY DONT SEE THEMSELVES HAVING THE COURAGE FOLLOWING THERE OWN DREAM ‼️ #febuary23rd

The rapper has said that even though he has been in a string of short-term relationships over the years, he broke up with all his girlfriends because he was never serious.

Wearing His Philosophy on His Sleeve

The one thing that Tekashi69 does love is his tattoos, which can be seen all over his face and body. He claims that he has over 200 tattoos of the number “69” on his body in both figures and words because they are representative of his philosophy and lifestyle.

Words can’t explain the anger I have right now… I grew up not having shit in Brooklyn… Everyone knows me for giving back in my community BUT as a Latino I feel the need to help my people. I’m not Dominican… But we are ALL ONE ✊? ????????????Life is what you make it. If I made it I’ll try all in my power for all us to make it… at least have hope. ?? God bless us. @william_asher ?

To that effect, Tekashi69 has been involved in the AIDS Walk New York, as some of his friends are suffering from this dreaded disease. Reportedly, he is even planning to put together a manufacturing unit to produce and sell his own line of condoms on the market.

In the video for his single, “Gotti,” Tekashi69 is seen doing his best to help some poor people as he distributes money among them.

Do Your Own Thing

Tekashi69 does not want to endorse brands as he believes that everybody should evolve their own personal style. He wears whatever he likes and does not like to conform to society’s standards. He claims that “society can’t understand me” (SCUM).

MUST WATCH‼️REALIST SHIT YOU WILL EVER HEAR. THERES NOTHING YOU CAN SAY THAT PROVES THIS WRONG. FOLLOW YOUR DREAMS‼️ SHARE‼️‼️‼️‼️ GO LISTEN TO THE NEW PROJECT BUY IT AND ENGOY IT‼️‼️??

The rapper’s message to the youth is that they should follow their dreams and work hard to make them come true.

Tekashi69’s Instagram account clearly shows that he has a passion for music and is a rapper to watch out for. His music has been described as full-throated and hyper-aggressive, but it is a hit among youngsters.

The only problem for the rapper is that he has run afoul of the law and may face legal and civil action in the future. But until then, the self-proclaimed “King of New York” will continue to entertain audiences with his over-the-top but catchy-as-hell music.

Tekashi69 is in the house, folks!