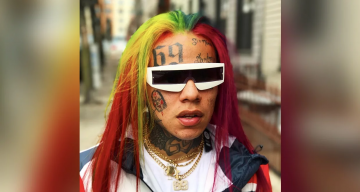 Colorful rapper Tekashi69 posted a message on Instagram that worried some of his fans. He has directly asked his Instagram followers if he should take a break. The response was, of course, massive.

Tekashi69 a.k.a Tekashi 6ix9ine or simply 6ix9ine is known more for his controversy-courting tendencies than his songs. But it appears pumping out music has worn him out!

The rapper took to Instagram to ask his fans, “SHOULD I TAKE BREAK?”

He says that he has been releasing songs one after another without letting the previous song “sizzle.” That is, he’s not giving his audience enough time to savor a song before he releases another.

In what can be seen as humble-brag, he claims that he doesn’t promote his songs until the day of their release. And once it’s out, he moves on to record a new song.

This pattern and his overflowing success seem to be too much for the rapper. As he puts it, “like look at my numbers they are over the top BUT I feel like I’m doing to much. [sic]”

Those who follow Tekashi69 on Instagram might be aware that the young rapper occasionally trolls his fans. Given that he’s bragging about his own efforts, it may be that the artist is only pranking his followers.

However, comments to this post reveal mixed reactions from concerned fans. Many want the rapper to continue releasing new songs to chart on the Billboard Hot 100.

But a handful of considerate followers believe a break would do him good and build hype for his next song.

Meanwhile, his haters are apparently happy with the idea of 6ix9ine going on break. Some are even appealing him to extend his break (if he takes one) to forever!

There are also a few skeptics who don’t believe his hardworking tenacity is the reason he wants to take a break.

Tekashi69 is as divisive a rapper as they come. Besides beefing with other rappers, the Instagram sensation has had a few run-ins with the law that have cost him endorsements.

Recently, 6ix9ine was being investigated as a person of interest in a shooting at Brooklyn’s Barclays Center. The incident cost him a $4.9 million endorsement deal with headphones company, Tunes Audio.

Some think losing that deal has impacted the rainbow-haired artist. And according to these Instagram users, this is the reason why 6ix9ine is contemplating a break.

It’s not uncommon for artists to go radio silent while working on new music. Nicki Minaj, Kanye West, and Justin Bieber are among the musicians who have opted to take a break from the public eye to focus on producing music.

However, it’s highly unlikely that Tekashi69 is going on a hiatus anytime soon. He recently released his latest song, “Gotti,” and has been performing at several venues.

Just a day before his cryptic post, the 21-year-old announced his royal arrival in Los Angeles. The last time he was there, he got into a heated beef with YG and The Game.

But if Tekashi69 really wants to let his songs “sizzle,” who are we to question it?