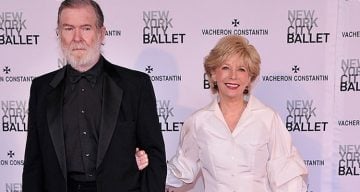 Taylor Stahl Latham is the daughter of journalists, Lesley Stahl and Aaron Latham. She and her parents are getting some attention after Lesley Stahl’s interview with President-Elect Donald Trump on CBS’ 60 Minutes on Sunday.

Donald Trump gave some insight to what his presidency will be like, in an extensive interview with Lesley Stahl on 60 Minutes last night. Trump’s first post-election interview that took place in his residence at Trump Tower has brought Lesley Stahl and her family under the spotlight, especially her daughter, Taylor Stahl Latham, who has typically stayed out of the media’s eye. The 40-year-old has a wonderful family, and a successful career. Here are some must-know facts about Taylor Stahl Latham, including details on her husband, parents, and net worth.

Taylor Stahl Latham is the vice-president of Double Feature Films, but that didn’t stop her from expanding into the field of business. In 2008, she launched Our Little Barrel, a luxury clothing line with a wine theme. The business idea stems from Stahl Latham’s and her husband’s love for wine.

Taylor Stahl Latham’s net worth is not known, and neither is her father’s, Aaron Latham’s. Her mother, Lesley Stahl, has a net worth of approximately $20.0 million, with a salary of $1.8 million per year.

By venturing into the clothing business, Stahl Latham was following her grandfather’s footsteps. Her father was a food company executive and owner of a leather-finishing company called Stahl Finish. At the party celebrating the launch of Our Little Barrel, Stahl Latham told the Observer, “”[My grandfather] did leather, we sort of do silk, but I think we’re carrying on the textile theme,” adding that her grandfather sold the business to Beatrice Foods long ago, but there was a part of her that wanted to inherit her father’s business.

2) Stahl Latham’s Husband was Hired as Her Assistant

Taylor Stahl Latham met her husband, Andrew Majors, in 2001 when she hired him as her assistant. She was working at Double Feature Films at that time and Majors was a screenwriter. They became good friends and shared a love for wine. Every few months, the two would go to the wine country in California with a group of mutual friends in a rented van.

After being friends for two years, the two began dating, and Majors proposed to her in 2006. Quite fittingly, they decided to have their wedding in a vineyard in Santa Barbara.

The couple couldn’t find items related to their theme, so created their own wine-themed logo and gifts for the guests! This wedding experience inspired the couple to start their own company called Our Little Barrel. Now, while Stahl Latham works at Double Feature Films, Majors works on their business full-time.

3) Her Parents Met When They Were Reporting on Watergate

Lesley Stahl’s prominence grew when she covered the Watergate scandal of the 1970s. Aaron Latham was The New York Times’ reporter assigned to Watergate, as well. Stahl and Latham tied the knot in a low-key wedding, shortly after they found out that Stahl was pregnant. About her marriage, Stahl had said “I wouldn’t have a child without being married,” to People, adding about CBS that, “They weren’t easy on me. I had the Korean scandal, which meant stakeouts on my feet.” Despite the hardships, Stahl says that keeping her child was the best decision she had ever made.

Taylor Stahl Latham and her husband have two children; a son named Jordan Majors, aged five, and a daughter named Chloe Majoros, aged two. Their maternal grandparents had wanted grandchildren for years and are very attached to the two. Stahl shared her experiences on being a grandmother in her book Becoming Grandma: The Joys And Science of The New Grandparenting, which was released earlier this year.

Stahl had worked until the last day of her pregnancy, and had returned to the CBS newsroom a few weeks after her daughter was born. Taylor Stahl Latham spent most of her childhood being cared for by a nanny, while her mother was making a name for herself as one of the few successful female reporters. Because she didn’t spend much time with her daughter as a child, Stahl now devotes the majority of her time to her daughter and grandchildren.