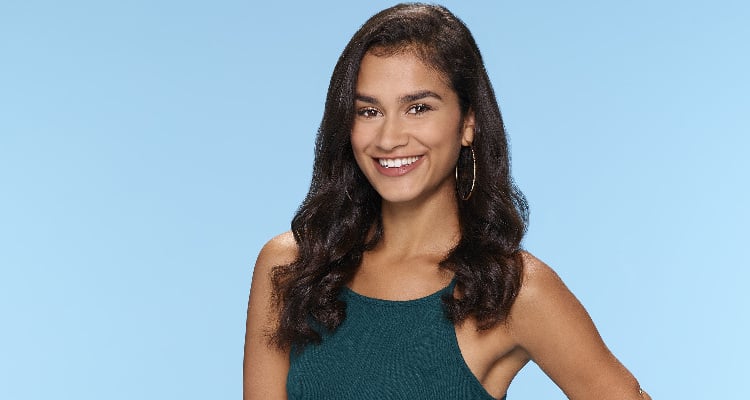 Nick Viall is one lucky man! He gets to choose a potential bride from 30 beautiful ladies, all vying for his attention and affection. One of the girls competing for Viall’s heart is Taylor Nolan. Here is everything you need to know about Taylor from The Bachelor.

The Bachelor season 21 premiered on January 2, and 30 beautiful women were introduced in the competition for Nick Viall’s heart.

This is not the first time Viall is on The Bachelor franchise. In fact, this is his fourth appearance on the dating reality show series, after losing two seasons of The Bachelorette and not having any luck in Bachelor in Paradise.

However, the tables have turned and the handsome bachelor will get to decide which lucky woman will get the final rose. These 30 ladies did everything they could to make a good impression on Viall. While 22 succeeded, those who failed were sent home.

One of the young women we met is Taylor Nolan. If you want to know more about Taylor on The Bachelor and where she is from, then keep on reading.

Where is Taylor from The Bachelor From?

Taylor Nolan is the youngest contender on The Bachelor. At just 23, she is trying to win the heart of a man who is over a decade older than her. But, as they say, age is just a number. This brunette beauty hails from Seattle, Washington and came to the show to find love.

Her Education and Job

In 2015, she started working at private practice and at First Step Recovery Center. In 2016, she graduated from John Hopkins University. Taylor Nolan is now a licensed Mental Health Counselor Associate practicing in Seattle, Washington.

Nolan is also into modeling. If you see Taylor Nolan’s Instagram photos, then you will see that she has worked with several photographers and organizations including Justin Herbert, Colin Christianson, Marco Ibanez, Zulily, Kevin Mullins, and Sean Dackermann.

Personal Details and Her Favorite Things

Nolan has her own blog, Talking With Taylor, where she writes about everything. She is an avid reader and some of her favorite books are Modern Romance, Daring Greatly, Rising Strong, The Lucifer Effect, The Art of Loving, The Relationship Cure, and Lying On the Couch.

Apart from books, she also listens to podcasts. Her personal favorite podcasts are Relationship Alive, On Being, Women on the Hour, This American Life, and Dear Sugar.

Taylor Nolan is 5’4” and the most outrageous thing she has done is go streaking. When asked about her three best attributes, she said her honesty, transparency, and loyalty.

The most romantic form of gift or gesture she has ever received is a card, because she loves words of affirmation. Also, if Viall goes on a date with her, one thing he has to keep in mind is not to just talk about himself. It is a huge turn-off for Nolan.

The person she admires the most in the world is Brené Brown because of her strength and courage to be memorable. Taylor Nolan will impress a man by being herself, honest, and would dress up.

Nolan confessed that being biracial meant that making connections was tough while growing up. To her, it seemed like she did not fit in. But she is staying positive and hopes that she makes a good and strong connection with Viall.

Like most other girls, Taylor Nolan was nervous and excited to meet Nick Viall. In fact, the 23-year-old was so nervous that, during her introduction with Viall, she said, “I am so excited to be here. Before coming, all my girlfriends were like, ‘No! He’s a complete piece of s**t.’”

She tried to do damage control by adding, “But I don’t believe them or anyone else who thinks that. Otherwise, I wouldn’t be here.” The introduction was pretty uncomfortable and although she was extremely blunt, Viall gave her another chance.

Though she made it past the first episode, if Nolan wants to win Viall’s heart, she needs to think before she speaks. It will be interesting to see how far she goes on the show.

Although she had a rocky start, Taylor Nolan is undoubtedly a very intelligent and smart woman. What do you think about her? Do you think she will get a second rose on the next episode of The Bachelor? Let us know your opinion in the comments section below and keep watching The Bachelor Monday nights at 8:00 p.m. EST on ABC.