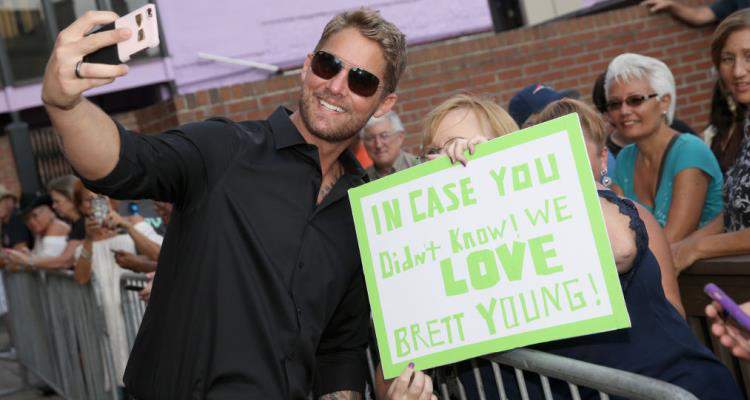 In case you still thought you had a chance, we’re here to tell you that you don’t! It’s official: Brett Young’s fiancée is Taylor Mills (not to be confused with the singer). After knowing each other for more than 10 years, Young and Mills are finally engaged and we want you to get in the know with our Taylor Mills wiki. So, keep reading!

She Met Young in College

Taylor Mills’ age is 31 and she met the “In Case You Didn’t Know” singer, 36, when she was attending Arizona State University.

“We met a little over 10 years ago in Scottsdale while she was at ASU and dated for a little over six years. After school, she and I both moved to Los Angeles together. When I moved to Nashville, we took a break for a few years, and I wrote a lot of my first record about her,” Young told People.

He added, “There was never any bad blood; it was just the wrong time for us. We recently got back in touch and realized that we were both finally in the same place and knew it was right.”

Mills has an Instagram account full of pics, but the only catch is that her account is private! But don’t worry, there are plenty of pics of her on Young’s Instagram account, especially the proposal, where they share a kiss, with a People exclusive watermark. The two certainly look like one fine couple—and now it’s official that she’s agreed to spend her life with him! (Sorry to all the sad girls who were hoping for the chance!)

Young popped the question to his longtime girlfriend-now-fiancée in Mississippi at the Graduate hotel near Ole Miss, where he went to college.

“We met in Arizona while she was at school at ASU, and we will likely get married there, so I thought it would be romantic to propose where I went to school,” he explained. “We were able to get a suite with a large covered patio and the hospitality staff at the hotel set it up while we were at dinner, so it was waiting for us when we got back.”

Young presented Mills with a custom made ring, that he designed with David M. Kodner of David Kodner Personal Jewelers. And it’s right up there with Paris Hilton‘s own personalized gem!

Young Writes about Love and Heartbreak

If you’re a fan of Young’s music, then you already know that love is a common them in his songs. And what better inspiration than his gorgeous new fiancee! Since the release of his 2017 self-titled debut album, love and heartbreak have come naturally to the singer. He even wrote 11 of the 12 songs on the album himself.

“I think, for me, love songs and heartbreak songs are the easiest songs to write because it’s just straight from personal experience,” said Brett to Nash Country Daily. “I think everybody’s felt both of those. Everybody’s been in love, everybody’s had heartbreak.”

He continued, “We noticed that when we put it together, the 12 songs that would make the record that we liked, there’s not a party song on this record. I’ve written a ton of party songs, and not that there’s anything wrong with that. I think, in trying to tell my story and let people get to know me, it seemed like we should talk about things that I’ve lived.”

While a wedding date hasn’t been announced, we’re glad that Young’s heartbreak days are over!