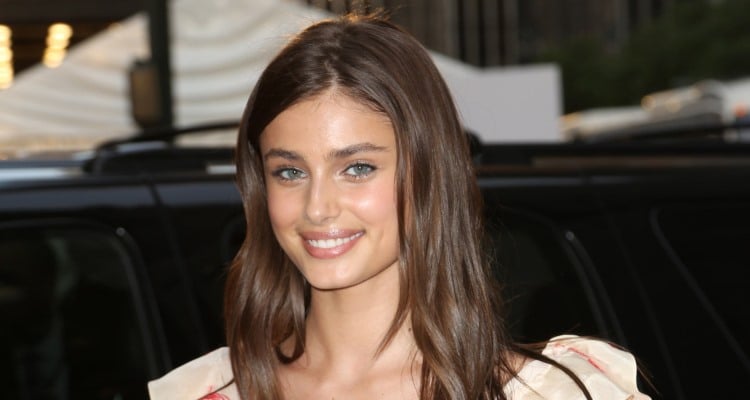 Famed luxury cosmetics company, Lancome can add another ambassador to its list, as model Taylor Marie Hill has become the newest public face to endorse popular luxury skincare/cosmetics line. However, as exciting as this news is, most people likely don’t know a lot about the famed Victoria’s Secret Angel, outside of what they see in Taylor Hill hot pics; after all, it’s not exactly like there’s a Taylor Marie Hill wiki or anything. But while there isn’t a Taylor Hill Wiki, you have us (and the Taylor Hill Instagram) to give you all the information you need on the new Lancome cover girl. So instead of searching terms such as, “Taylor Hill age” for info, why not just read on for five interesting facts about the new Lancome beauty?

She Was Discovered in a Barn

While she may be known for her glamour, both with and without Lancome makeup, Taylor Hill’s career didn’t start out that way. At age 14, in the town of Granby in her home state of Colorado, Hill was noticed by agent and photographer Jim Jordan in, of all places, a barn at a dude ranch. Jordan, who would eventually become her agent, took pictures of her riding horses and liked what he saw, enough to make photographing her a full-time profession.

When in high school, Hill wasn’t the girl that every guy wanted; in fact, it was the total opposite. Hill said she felt like she never fit in, being, “the butt of everyone’s jokes.” She was called, “tall, skinny Taylor” because of her height. This treatment was part of the reason why she started modeling despite the previously mentioned hesitation. She felt that if she didn’t belong at school, then she may as well try to belong somewhere else. Of course, now old male classmates are quick to contact her and try to get back in touch. Too bad they already missed their chance!

She is the Youngest Victoria’s Secret Model

Even before she started her modeling career, Taylor Marie Hill wanted to be a Victoria’s Secret Angel, so clearly everything worked out for her! Last year, at 19, she became the youngest person to ever walk the runway for the famous lingerie company, a fact that carries a certain amount of prestige. It’s even more amazing when you consider how initially hesitant she was to attempt a modelling career in the first place, never mind wanting to be an Angel. Now, she’s nothing but proud to rock those wings!

She Wants to Become an Actress

In 2013, Hill called acting a “newfound passion,” when agent Jim Jordan got her a gig with one of the largest theatrical agents in the world. She says that acting has also helped her to “have a voice in this world.” However, she explained that her modeling career currently keeps her from doing any major roles that would require her to be off the runway for too long a period, not to mention that it would be too hard to focus on both professions. She has hopes to explore a potential transition to acting further in the future. Her goal is to end up on the big screen, and we’re willing to bet that Hollywood has a place for her!

She is the New (and Youngest) Lancome Spokeswoman

The Taylor Hill Lancome deal was announced on her official Instagram and apparently being a Victoria’s Secret Angel was just one dream; being the face of a cosmetics company was another! “This an amazing day and I cannot believe one of my biggest dreams has come true!!” she wrote. And much like with Victoria’s Secret, Hill is currently the youngest person to promote the Lancome brand. That’s sure to make quite a difference for the Taylor Hill net worth!