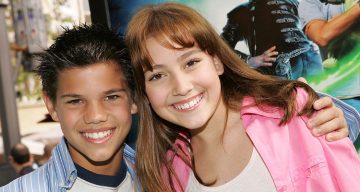 The adorable Taylor Dooley played Lavagirl in The Adventures of Sharkboy and Lavagirl. She was part of the superhero duo that saved Max from his bullies. But after a brief acting career, Taylor Dooley took a hiatus. Where is Lavagirl now? We have everything you need to know in our Taylor Dooley wiki.

Taylor Marie Dooley was born on February 26, 1993 in Grosse Pointe, Michigan. She has a younger brother named Drew and was interested in acting at an early age. Dooley began taking acting lessons when she was just nine years old, and studied dance and acting with the Phoenix Theater’s Performance Troop.

As a child, the talented Taylor Dooley landed small roles in commercials for Famous Footwear, Disney Superstar Kids, the Mary-Kate and Ashley clothing line, and the Honda Odyssey. In 2004, an 11-year-old Dooley auditioned for the role of Samantha Parkington in An American Girl Holiday, but she lost to her friend, AnnaSophia Robb.

In 2005, Taylor Dooley landed the role that garnered her national fame as Lavagirl in The Adventures of Sharkboy and Lavagirl 3-D, alongside Taylor Lautner. She was nominated for a Young Artist Award for Best Performance in a Feature Film by a Leading Young Actress in the movie.

After the movie’s success, Taylor Dooley had minor roles, including an appearance in an episode of House. Her acting career was short-lived as she took a hiatus to concentrate on her education.

On May 14, 2016, Taylor Dooley married her longtime boyfriend, Justin Cassotta. The couple dated for two years before tying the knot. In November 2016, she gave birth to their first child, a boy named Jack Alexander Cassotta.

Taylor Dooley is a fan of all kinds of music, except country. She enjoys horseback riding, dancing, and swimming. Dooley is inspired by Angelina Jolie for the amazing charity work she does. She loves Natalie Portman, Charlize Theron, Johnny Depp, and Leonardo DiCaprio.

Lavagirl has a decent following of over 16,000 people on Instagram. Take a look at some of Taylor Dooley’s pictures from her Instagram.

happy birthday to the love of my life…my handsome hubby, goofy best friend, my forever partner in crime. you make me the happiest woman alive. I'm soo blessed that God gave me you to walk through this life with ? there's no one else I'd rather take on all of life's crazy journeys. here's to many more birthdays & growing old together ?? #happybirthdaybabe #loveofmylife #sentimentalsunday #missingourwedding

#3. How Lavagirl spends her time these days.

#flashbackfriday to the one time I thought I was on Baywatch ???? #bebaywatch #baywatch #baewatch

you're like a Sunday morning, full of grace and full of Jesus ? love seeing life through your eyes baby boy #lifewithjack #sentimentalsunday #lovemyfamily #mysmileyboy #happybaby