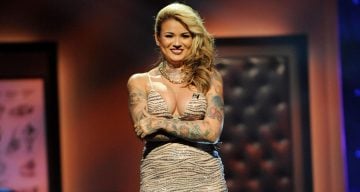 Tatu Baby was so memorable during her first appearance on Ink Master that fans voted her into another season. Now the Ink Master: Angels star is back on reality TV and revealing what’s it like to grow up in the drug cartel lifestyle. Cartel Crew premiered on January 7, 9:00 p.m. EST on VH1, and it takes us into the lives of eight descendants of cartel families. The cartel scions like Tatu Baby are leaving their family history behind for better lives. Our Tatu Baby wiki sheds more light on this rising reality star.

Her father was a notorious drug dealer in New York City. And it was his status that also got him killed. After her father was murdered when she was four years old, Flores and her mother fled from New York to Miami where she grew up.

Flores is now far from the cartel business, but she has connections to the related families. One of her closest friends and castmates on Cartel Crew, Michael Blanco, is the son of Griselda Blanco, better known and feared as the “Cocaine Godmother.”

Her best friend Stephanie Acevedo’s father was a notorious drug smuggler in Miami. Loz, one of the artists at Tatu’s tattoo shop, has an unspecified cartel affiliation. Another friend, Dayana, reportedly spent three years behind bars on drug-related charges.

Tatu and her friends, including Marie Ramirez De Arellano and the twins Nicole and Michael Zavala, enjoyed the spoils of the cartel life when they were children. Cartel Crew follows these adult children’s attempts to reshape their lives away from their families’ criminal histories.

Flores has a brother, Kenneth Roman, but it doesn’t appear he will be appearing the show.

She’s a Tattooist and Competed on Ink Master

Those who remember Tatu Baby’s run on Ink Master would know she’s a talented tattoo artist. She participated in season 2 of the Paramount Network series where she was voted off.

She made history as the first contestant to return to the series when Ink Master’ fans voted for her return through the show’s Facebook poll. Tatu therefore competed in season 3 and also returned to the spin-off, Ink Master: Angels.

A young Flores was smitten by body ink at a young age, after getting inspired by her tattoo artist. She got her first tattoo when she was only 14.

A talented artist, she was studying computer animation but ditched that career to ink people. After experimenting with her artistry, she became a professional artist at the age of 19.

Tatu is the co-owner of the shop Till the End Tattoo Gallery. Her Day of the Dead work makes her a sought-after artist.

Her Baby Daddy Is in Prison

Tatu had a brief return to reality TV when she was dating Black Ink Crew’s Ceasar Emanuel. But that relationship ended as soon as it began.

I want to wish everyone a HAPYY THANKSGIVING ? I am thankful for all of you but especially this year my son finally gets to spend this day with his father. His smile is worth the world.

She has a son, Deniro Roman Soto (born 2014), with a man named Eddie. Her Instagram has some cute pictures of her precious son. Tatu, a proud Latina, said her son has Brazilian and Dominican heritage along with her own Colombian ancestry.

Tatu’s baby daddy was reportedly in prison. But he was recently released, which makes for some drama. Judging from her latest Instagram posts, things seem amicable between Tatu and Eddie—though it can’t be said if they are back together.

Cartel Crew will see Tatu Baby navigate her efforts to run a legitimate business and raise a child with the baby daddy back in the picture.

Also Read: Everything You Need to Know about Dutchess from Black Ink Crew