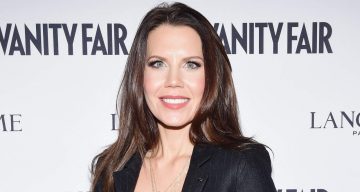 YouTube celebrity, Tati Westbrook has launched her own brand of vitamins to keep skin, hair, and nails glowing! The beauty vlogger came up with the concept and launched Halo Beauty, which takes care of all types of beauty needs. But before you head off to buy Tati Westbrook’s cosmetic brand, here’s everything you need to know about the woman behind it!

There is no denying that social media gives a person plenty of opportunities to make it big and Tati Westbrook took that to her advantage. She’s now a woman who has millions of followers, followed by millions in cash!

Who Is Tati Westbrook?

Born on February 14, 1982, Tati Westbrook’s age is 36. She is from Seattle, Washington, and worked as an image consultant before becoming an acclaimed YouTube celebrity.

Westbrook grew up with three sisters. She was raised by her mother, Cindy Krievens, who worked as a talent agent.

In her childhood, she landed small roles in movies like Greek and Unsolved Mysteries.

After graduating from high school in Washington, Westbrook ended up gaining weight due to stress and anxiety. Although she found it difficult to lose weight, once she did, she completely transformed herself.

She skipped out on college moved to Los Angeles in 2010, and began working as a makeup artist and image consultant, posting her work online.

In November 2010, Westbrook began posting her videos on YouTube. Today, her channel has over 3.5 million subscribers!

Now, Tati Westbrook is launching her new brand, Halo. According to reports, her line is infused with vitamins and is said to be very good for the body.

Westbrook’s makeup videos show which products are good to use, where you can find them, and how to maintain your skin and hair well under budget. Her tutorials caught traffic because of the nature of her videos.

The beauty vlogger often compares high-end pricey cosmetic brands to those cosmetics you get in drugstores. And many people began liking the idea of looking good while being good to their wallets! (Cosmetics aren’t cheap, right ladies?)

She did well by sticking to her true self. She has even won awards for being the digital influencer she is today.

Here’s a video of Tati Westbrook talking about Halo Beauty:

In 2016, she also released an app named GlamLifeGuru. Although many people have approached her for sponsorship, Westbrook believes that she would lose her identity if she began advertising products.

Westbrook assured her viewers that she wants to stay unbiased. She wants to be able to provide proper reviews of the products she showcases in her videos.

With Tati Westbrook’s net worth estimated at $3.1 million, it’s safe to say that she’s doing very well without any sponsorships!

Who Is Tati Westbrook Married To?

She married her long-time boyfriend, James, in January 2017, and uploaded a beautiful picture of their wedding day on the photo-sharing app.

James also appears as a guest star on her video tutorials. It’s fun to watch him, especially when he gets his hands on the products to try!

Getting way too excited to post my 1000th video on @youtube ✨??? The most joyful beautiful day I've ever had… & the memory of it all through video is captured perfectly ❤️