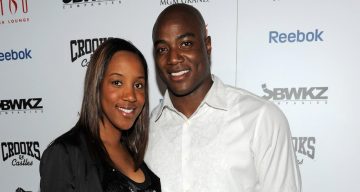 Former American football player DeMarcus Ware is a part of season 27 of Dancing with the Stars. Ware is extremely close to his family, and his kids are very excited to see their dad strutting his stuff on the stage. Now, people want to know more about Ware’s ex-wife. So, here are some details from Taniqua Smith’s wiki.

Who Is Taniqua Smith?

Born on August 8, 1981, Taniqua M. Smith is 37 years old. She was raised in Alabama and is a former personnel member of the United States Air Force.

She Is DeMarcus Ware’s Ex-Wife

DeMarcus Ware is a former football outside linebacker and defensive end. He was drafted by the Dallas Cowboys in the 2005 NFL Draft. Ware announced his retirement from the NFL in 2017.

Ware and Smith met each other in high school. Smith used to work at a deli and would sneak cookies and other snacks to Ware.

According to sources, the couple got married in March 2005 at a courthouse in Alabama without any of their friends or family present. After their nuptials, they went to their favorite fast food restaurant.

DeMarcus and Smith had their fair share of problems when they tried having a child. Smith had three very difficult pregnancies.

Her first miscarriage was in April 2006. But she got pregnant again, and they named the child Omar.

Destiny, however, had other plans for them. The couple learned that Omar, who was still a fetus, had no kidneys and wouldn’t survive.

Omar was stillborn in 2006 and was cremated the same day. Smith and Ware were devastated, but they stayed strong and tried to get pregnant a third time.

They went to numerous doctors and fertility specialists who were experts in high-risk pregnancies.

Two years later, the couple decided to part ways and got divorced. However, they remain amicable for the sake of their kids.

According to reports, Ware has now moved on and is with Angela Marie Daniel.

36th year of life and it is well with my soul. “Anyone can find the dirt in someone. Be the one who finds the gold.” Prov. 11:27 #Birthday #LeoTheLion #Grateful ?: @ericamelissa_ ??

Taniqua Smith met Shane Richards in July 2016, when he sold her a new car. Their love story began when Smith asked him to have lunch with her.

Richards hails from Arlington, Texas and lives in Colleyville, Texas. He is an Audi brand specialist at Audi Grapevine and works as a realtor at Keller Williams Southlake Market Center.

Taniqua Smith’s husband appears to be a sucker for romance; he made a plan to propose to her during their vacation and got down on one knee while they were taking some family photos on the beach.

Smith was over the moon and said “yes” to his proposal. The couple got married on August 19, 2017 at Dreams Playa Mujeres Resort & Spa Resort in Isla Mujeres, Mexico.

They threw a reception at The Nest at Ruth Farm on November 11, 2017 for those who couldn’t attend their wedding.

It also looks like Richards has a son from a previous relationship.

Taniqua Smith and DeMarcus Ware have moved on with their lives and found love again with their respective partners. But we’re pretty sure that she’ll be rooting for her former husband to win the Mirrorball Trophy on Dancing with Stars!