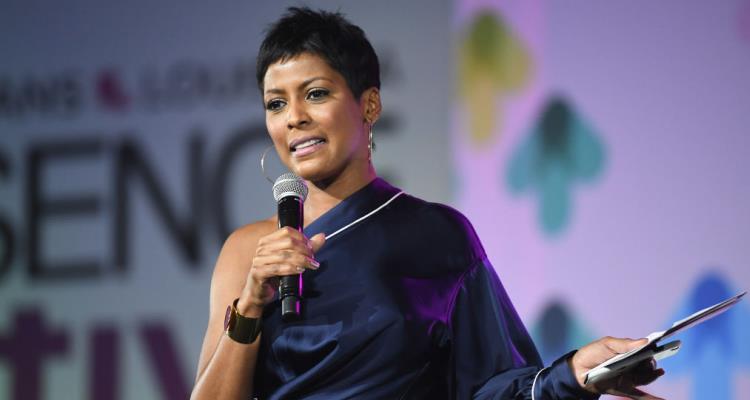 What happened to Tamron Hall? Known for her co-hosting duties on the Today show (and maybe more known now for her exit from the show), Tamron Hall seems to be bouncing back! Earlier this year, it was revealed that former Fox News star, Megyn Kelly would be replacing Hall. She addressed the news of her departure from the show in March, and in true Tamron Hall style, held her head high and pressed on. Where is Tamron Hall now? Read on to find out!

Lately, it seems as if famed and beloved news anchor, Tamron Hall, has spent more time being the subject of current news events rather than reporting on them. This is all thanks to her controversial decision to effectively terminate her employment at NBC once her contract expired at the end of February 2017. Naturally, this decision left many fans of the network’s popular Today show bewildered with a few unanswered questions in the wake of her abrupt departure. What is Tamron Hall doing now? Where is Tamron Hall? Since it appears that the answers to all of these queries are very complex—especially in light of the hypersensitive race relations America is currently facing—there’s a lot of ground to cover on this matter. So, let’s get started!

What Happened to Tamron Hall?

Until earlier this year, Tamron Hall anchored MSNBC, hosted MSNBC Live with Tamron Hall, and co-hosted the third hour of the Today show called Today’s Take from 9 a.m.-10 a.m., alongside Al Roker. The segment mostly focused on current events, celebrity news, and entertaining human-interest stories. After three immensely successful years of hosting the show, fans and NBC executives alike were shocked to find out that Tamron Hall wanted to leave, despite the fact that the network offered her a multimillion dollar deal to renew her contract. So, what was the reason for this decision, you might ask?

It turns out that NBC was somewhat responsible for their own misfortune when they unexpectedly informed Miss Hall they were planning on replacing her and Al Roker with the conservative Fox News star, Megyn Kelly. To add insult to injury, they did it moments before she was due to appear on the air for that very segment of the show…via email! Talk about horrible timing and having no tact. Interestingly, just a week before receiving this news in such a distasteful and impersonal manner, Hall and her colleagues on the show received an email from the executive producers of the show congratulating them on being the number one morning show three years running. As you can imagine, Hall was unhappy with the way the whole situation was handled and even though NBC wanted her to remain on the show, she decided to spread her wings and move on to more fruitful opportunities. That leads us to the question…

What is Tamron Hall Doing Now?

Following Tamron Hall’s professional and seemingly amicable public departure from the network that tried to stab her in the back, she managed to work out a very favorable deal with Harvey Weinstein of The Weinstein Company and co-founder of Miramax, the revered film and television production company. Tamron Hall’s new job is multilayered and it’ll place her at the helm of her own daytime talk show, which remains to be named. She’ll also serve as the executive producer of the program, the core focus of which will be to report on entertainment news, hard hitting current event news stories, interviews, and human interest stories. With this new gig, Hall’s responsibilities will also include serving as executive producer for several other upcoming unscripted programming produced by Weinstein Television.

It’s obvious that Harvey Weinstein couldn’t be more excited to collaborate with the accomplished news anchor and television personality. Here’s what he had to say about the new addition to his company:

“I’ve been working towards developing a talk show for a long time, but needed to make sure I did it the right way and with the right person to take the lead. Tamron is far and away that person. She’s an exceptionally talented journalist whose interviews masterfully walk the line between entertainment and hard hitting. We couldn’t be more thrilled to begin this new venture with her.”

About to go live on Instagram. Going now with this guy.. talking about my new show. #harveyweinstein !!!

As the saying goes, “everything happens for a reason,” right? Well, it seems NBC ended up with the short end of the stick, given the backlash they’ve been receiving from groups like the National Association of Black Journalists for apparently ‘whitewashing’ their daytime programming. On the up side, it turns out that this so-called divisive move on their part forced and enabled Tamron Hall, age 46, to completely revamp her career and move it forward in a more positive and hopefully lucrative direction. By the end of 2016, when she was still working for NBC, Tamron Hall’s net worth was an estimated $5.0 million, but that’s likely to increase with her new career endeavors. No doubt that she’ll be taking her fans along with her when her new show finally launches, but her additional work-related responsibilities will also mean longer working hours and probably less time for a social life.

Is Tamron Hall Dating Anyone?

There have been a few rumors circulating regarding Tamron Hall’s romantic situation. That includes reports that she was dating her fellow MSNBC news anchor and host of the show The Last Word with Lawrence O’Donnell, Lawrence O’Donnell. Those rumors were never substantiated by either party and it remains uncertain whether or not he is Tamron Hall’s boyfriend. That said, she did mention in January of this year that she was romantically involved with a man named “Tony.” Whether that relationship has blossomed into something more serious is yet to be seen, as Hall is very intent on keeping her private life under wraps as much as possible.

In 2004, Hall’s older sister, Renate, was found floating face-down in her swimming pool. Suspicions of domestic abuse at the hands of various lovers had been surfacing for years and it’s believed that she was murdered, although the case remains unsolved to this day. Hall has stated in the past that her sister’s tumultuous experiences with men have made her more cautious when it comes to dating, even though she’s been lucky that none of her lovers have ever demonstrated abusive behavior towards her. As a result of her sister’s tragic death, Tamron Hall has been involved in several anti-domestic abuse initiatives geared towards women of all ages and backgrounds. Tamron Hall is undoubtedly a strong influence and good role model, not only for women of color, but for all women who aspire to pursue a career in journalism and other largely male-dominated professions.