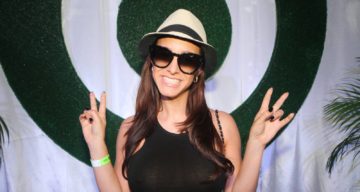 Tammy Torres participates in The 11th Annual Irie Weekend at on June 19, 2015 in Miami Beach, Florida. (Photo by Thaddaeus McAdams/WireImage)

Two men fighting over the same girl is a thing as ancient as mankind itself. Still, there is nothing more exciting for onlookers than two men slugging it out over who gets the girl! It’s happening in the world of “rap” once again. The two men in question are rappers, Lil Wayne and Drake. The girl who is at the epicenter of this feud is Lil Wayne’s girlfriend, Tammy Torres. This fight began because Lil Wayne’s one-time protege, Drake slept with Lil Wayne’s girlfriend! What’s worse is it happened when Lil Wayne was in jail serving time! Talk about stabbing your friend in the back!

Wayne is working on his tell-all book that he plans to release soon. Excerpts of the book have been leaked and found their way into the media. Lil Wayne says that this infidelity happened when he was serving time in New York’s Rikers Island prison for illegal gun possession. His girlfriend, Tammy Torres and Drake spent a lot of time together and then that is when the infidelity took place. It seems Drake can get any woman he wants, and this time, he turned on the charm, full force, on Torres. Drake went to visit Lil Wayne in prison and admitted to him the details of his affair with Torres.

As expected, all hell broke loose. Lil Wayne says that he was deeply hurt and depressed when he learned about Torres’ affair with Drake. In fact, he was so depressed that he refused to eat food and did not come out of his cell for several days. Lil Wayne was shattered. In his own words, he describes his feelings as “This is the type of s*** that a man never wants to find out when he is locked up. Cause only God knows what I would have done if I wasn’t locked up.” Li Wayne reveals that he is not angry because it was Drake that his girlfriend Torres cheated with. It would have hurt just as much if it was any other man.

It could be that this happened because sometimes life imitates art. In his hit single, “How to Hate” ft. T-Pain that came out in 2011, Lil Wayne rapped about a girlfriend who cheated with his friend. The lyrics say it all; “And when I went to jail, she f***** my ni***s / Well, I guess I am single for the night.” Back then, this was just a song but today it’s reality. These words have come back to haunt him and he is in deep pain.

In all this, doesn’t anyone want to know what Torres has to say? The feisty Torres has said that if Lil Wayne goes forward with his tell-all book, then she herself would come out with her side of the story. She would then reveal the juicy details of her fling with Drake. She said that if Lil Wayne tells this story she will tell everybody the truth of what happened in this bizarre love triangle. Torres even said that she would reveal who was a better lover, Drake or Lil Wayne. Ouch! We are pretty sure that Wayne wouldn’t want his girlfriend airing their dirty laundry in public, so it’ll be interesting to see how this one plays out. The public of course can’t wait for Torres to speak out. Right now, fans are all over Tammy Torres’ Instagram page, where she has posted saucy photos of herself.

Right now everybody is waiting for Lil Wayne to release his book, so that they can read all the sordid details of the three people in question. Drake and Lil Wayne are talented artists who have many fans. It would be sad to see them waste their time and talent fighting over a girl who changes loyalties like a girl changes clothes. But then again, when has passion listened to wisdom?