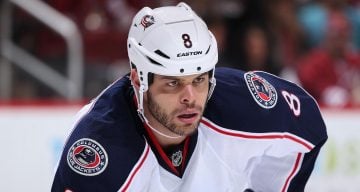 NHL player Nathan Horton has been missing from the ice due to injuries since he joined the Toronto Maple Leafs in 2015. While enjoying his virtual retirement, Horton has been focused on getting better, spending time with his wife, Tammy Horton, and celebrating the newest addition to their family. Tammy Horton has been the ever-supportive WAG to her hockey-playing husband. But she was at the center of some drama back when Nathan played for the Boston Bruins.

She Is Related to a Hockey Legend

Born Tammy Plante on April 26, 1982, this native of Canada is 36 years old. She hails from Welland, Ontario, the same place 33-year-old Nathan Horton was born.

It’s not clear how Plante and Horton met or how long they’ve been together. They tied the knot on July 7, 2007, in Fort Lauderdale, Florida.

Tammy’s connection to hockey goes beyond her husband. She is, in fact, the great-niece of legendary NHL player, Jacques Plante.

Jacques Plante played goalie in the NHL during a career that stretched amazingly from 1947 to 1975, before he passed away in 1986. He played for the Toronto Maple Leafs and Boston Bruins, two teams Horton would go on to play for years later.

Plante didn’t play hockey herself, but she has always been the active type. She played sports, took dancing and guitar lessons, and enjoyed skating.

She’s a Mom of Three

Tammy Horton is heavily outnumbered in an all-male household. She and Nathan are parents to two boys, Dylan (born 2008) and six-year-old Zachary (born 2012).

And their family just got bigger. On May 29, 2018, the family welcomed Gavin Gabriel Horton.

She Was a Playboy Model

When she was a student in Canada, Tammy Plante had a thriving modeling career. She claims she had always been a natural in front of the camera.

As a child, her two older cousins encouraged her passion. “They would do my makeup with blue eyeshadow and bright red lipstick. It was always a dream for me,” recalled Tammy.

Plante began modeling in seventh grade. She had done dance photo shoots and Sears catalogs, but her first major job was for an art gallery in Toronto.

Her first introduction to Playboy came when she was a 10-year-old—she came across the magazines her dad’s friend had his garage. “My dad never had those kind of magazines but his friend had all kinds of posters in his garage,” she said. “I used to love how pretty the women looked. I always wanted to be a bunny. There is no other magazine that makes women look so stunning.”

Her dream came true when she became a Playboy model. She was Coed of the Week in December 2004 and Miss November. She also appeared in the Sexy Girl Next Door pictorial and the cover of Playboy’s College Girls. Her Miss November shoot took four days in New York City and was featured in four Playboy publications.

Her celebrity status rose even higher as a dancer and host for Canadian music channel MuchMusic’s Electric Circus. Plante even had a popular beer commercial.

At the height of her Playboy career, Plante was pursuing her degree in health sciences with a concentration in Clinical Nutrition and Community Health at Brock University. By then, she was already a certified fitness trainer and taught spin classes and kickboxing at her university gym.

Plante fell in love with yoga in 2004, when she relocated to Florida. She attended yoga school and acquired 200-hour certifications in Ashtanga Yoga and Heated Hatha yoga. She did another 700-hour course in Kundalini Yoga.

She continues to develop her skills and is studying in the IIN Integrative Nutrition Health Coach program.

She Was Accused of Cheating on Her Husband

Tyler Seguin went from the Boston Bruins to the Dallas Stars on July 4, 2013. The next day, Nathan Horton left the Bruins to sign a seven-year contract with the Columbus Jackets.

Seguin is an outstanding player and a lot of NHL fans couldn’t make sense of why the struggling Bruins would trade him to Dallas. Various theories cropped up, including one that claimed Horton’s wife was having an affair with Seguin.

There were unfounded rumors that Tammy cheated on Nathan with Seguin and the affair was the reason neither players could continue on the same team. So both Horton and Seguin supposedly left the Bruins because of the alleged affair.

However, the rumors are completely baseless. Tammy didn’t cheat on her husband and the rumors were apparently made up by fans upset by Seguin’s departure from Boston.

She Tweeted about Losing the Stanley Cup

Nothing could be more horrifying than losing your championship trophy! The Bruins last won the Stanley Cup in 2011, when Horton was still part of the team. As is custom, every member of the Boston Bruins got a day with the trophy. But Horton’s day was cut short…because the trophy didn’t make it to him.

Tammy traveled to Buffalo, New York to meet her husband before they would head to Dunnville, Ontario for a parade celebrating the victory. But to the Hortons’ shock, the trophy didn’t arrive at Boston’s Logan International Airport.

The world’s most precious luggage got lost between transfers, a fact Tammy relayed on Twitter.

“Cup was lost in Boston :(,” she tweeted, before following it up with another tweet that read: “Cup guy was late to his flight and didn’t get the cup on in time. Buffalo airport said it was missing, finally located on the ramp in boston. [sic]”

The cup was eventually found, but the whole confusion ate into Horton’s time with the trophy and he arrived at the Ontario parade without it. The Stanley Cup is on a tight schedule to keep it moving all summer. Horton got less than a day with it, since it was scheduled to go to the Czech Republic with Tomas Kaberle next.

While the Hortons and NHL fans won’t forget this incident, Tammy chose to delete her tweets later. She went on to delete her Twitter profile completely but is occasionally active on Facebook.