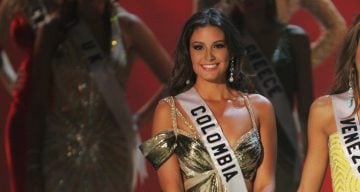 Narcos season 3 has been exciting and tense, as it follows the actions of the godfathers of the real-life Cali Cartel, led by the Rodriguez brothers. Some viewers, however, believe the show does not portray strong, intelligent, ambitious women; one of them being Paola from Narcos. Others have been impressed with Taliana Vargas’ portrayal of the woman. Check out our Taliana Vargas wiki to learn about the actress and her role on the Netflix series!

Paola, Jorge Salcedo’s wife, is first seen on the show crying over her husband’s refusal to leave the drug business as they planned. Her screen time is limited, but she is memorable in every single one of her shots. It’s no wonder she is seen with tears in her eyes, most of the times she is on screen­! She lives in a world full of angry male drug lords, plotting their next murder or raid. Paola stands as a calm voice of reason, and some even consider her to be one of the main contributors to the fall of the Cali Cartel. Some are wondering, why does she look so familiar? Is she based on a real person? Here’s what you need to know about this very important character.

If you are wondering why Vargas looks so familiar, it’s because she was part of the Miss Universe pageant. In 2008, she represented Miss Columbia and was named the first runner up. She also spent time acting in various roles, including the 2016 Cup of Love, and Fugitivos (2014). Vargas is also the president of the Casa en el Abol Foundation.

Although Vargas is based on Salcedo’s wife, the representation of her is unlikely true to fact. This is because Salcido is currently in witness protection and not much is known about his wife or family. Salcedo did say, however, that one of the main reasons why he helped the DEA take down the Cali Cartel was to protect his family. “I used to be Jorge Salcedo. I left my name in Colombia when I entered the U.S. witness protection program 16 years ago. I also left a home, a country, friends, family, even my past. But maybe my experience will help show the importance of fighting corruption as a way to fight the cartels,” he wrote in a Special to CNN.

Another reason why Paola’s character got so much attention is because of the actress’ charming smile and great physique. Hot pics of Taliana Vargas are on her social media, and over 1.5 million people subscribe to see her updates. Check out Taliana Vargas’ Instagram (@talianav) to see the gorgeous actress and stay up to date on her future projects!