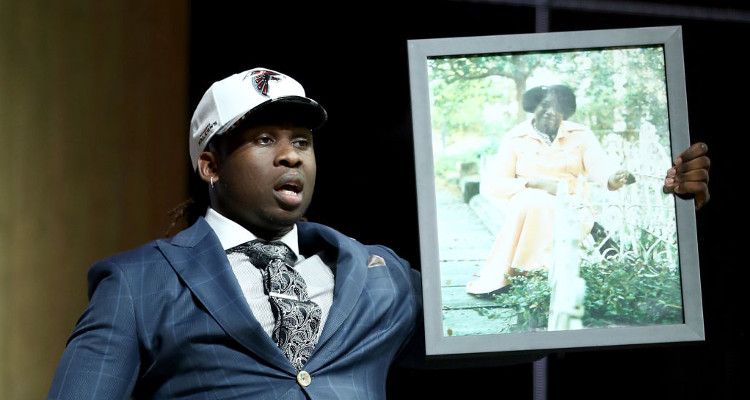 The NFL has a new rising star! Takkarist McKinley was drafted by the Atlanta Falcons and what an initiation! The UCLA defensive lineman moved everyone with his speech –and an F-bomb!

#1. He was Raised by His Grandmother

The 21-year-old’s grandmother, Myrtle Collins, single-handedly raised the boy. McKinley grew up in the tough neighborhood of Richmond, in the San Francisco Bay Area. His father was never in the picture and his mother abandoned him when he was five. She briefly returned when he was 17, only to vanish again.

Collins had McKinley’s aunt and cousin to help, but she went out of her way to make sure her grandson didn’t go down the path of drugs and gang violence like some his friends. She scoured the streets for recyclable cans to help pay their rent, with nickels and dimes at a time. At night, she’d spend time with McKinley watching WWE and Booker T on the TV in her bedroom.

#2. He Fulfilled His Promise to His Grandmother

When the elite edge rusher was the 26th overall pick of the Falcons, he stepped up to the podium holding a picture of his late grandmother. “I made a promise to her and I stuck to it. I made that promise, man,” said the fired up McKinley.

In 2011, Collins was on her deathbed. McKinley recalled entering her hospital room, mindful that she wanted him to stay in school and play football. So, he promised her he would make it to Division I, the highest level in college, right before she passed away.

He had the date of her passing tattooed on his arm and kept his promise by never ceding to academic pressures or injuries, in order to become a potential top 10 NFL draft pick.

“I told her! Before she passed away, I was going to live my dream! I was gonna go D-I! I was gonna get out of Richmond, I was gonna get out of Oakland! I was gonna go to the NFL! I made that promise to her, man! Thirty seconds later she passed away! And this is who I do it for! This is who I do it for, man!… C’mon, man! Get to the damn quarterback! We gonna get to the quarterback!” he said holding up a framed picture of Myrtle Collins. He then dropped an F-bomb following it, with a “fine me later!” The NFL also congratulated the athlete, tweeting that Roger Goodell fined him for cursing on live TV.

Roger Goodell fined Takk McKinley before he left the stage for cursing on live TV pic.twitter.com/BQFTVZUHsN

McKinley went to Kennedy High School in Richmond, California. He had 60 tackles and 11 sacks as a senior, and 50 tackles and 15 sacks as a junior. With his impressive stats and highlights, he committed to the University of California, Berkeley. However, he found out that he didn’t qualify academically and wound up at a community college. After one season there, he had 33 tackles and 10 sacks.

With his grandmother’s promise in the back of his mind, he thought he had failed. “I was talking about quitting football and I started applying to McDonald’s and Taco Bell,” McKinley said. “I was kind of just over it because I was like, man, I failed her.” He quit the football team, but Sylvester told him if he wasn’t going to play football, playing video games all day wasn’t an option.

So, he rejoined the team while working to gain acceptance to a major university. Thanks to some investigative work by UCLA coach Angus McClure, the family discovered that he had not been credited for two high school classes he took over the summer at a junior high school. McClure had to procure letters to prove the legitimacy of McKinley’s qualifications. Three games into UCLA’s 2014 season, the NCAA cleared McKinley to play for the Bruins and Takk McKinley fulfilled his promise to his grandmother.

Now, the Bruins DE joins other UCLA alums, Datone Jones and Anthony Barr at UCLA. The details of his contract are yet to be disclosed, but we’re sure he’ll have a hefty net worth pretty soon!

#4. His Aunt Saved Him from a Dangerous Situation

Along with his grandmother, McKinley’s aunt Peggy Wiggins took care of him, too. She worked at a second-hand store to provide for their large family crammed into a small residence. Wiggins and her eldest son, Sylvester, became McKinley’s legal guardians after Collin’s death.

One time, when McKinley was just a baby, he was in a dangerous situation. Wiggins’ younger sister and her three children, including Takk, were held against their will by a man. Wiggins, Collins, and Sylvester gathered as much money as they could to fly across the country and rescue them. Years later, when the athlete learned of his rescue story, he said, “Man, y’all been fighting for me my whole life.”

Life wasn’t easy for Takk McKinley with many relatives living in a cramped home. So, he often slept on the floor. “We have a big family,” Sylvester Wiggins said. “So he was always sharing everything.” According to Jeremy Fowler, an NFL writer for ESPN, when McKinley found a bed for the first time in months, he overslept and missed a recruitment visit.

Quite life turnaround for Takk McKinley: Overslept at Cal recruiting visit b/c he hadn't slept in bed in months. Now, first-round pick.