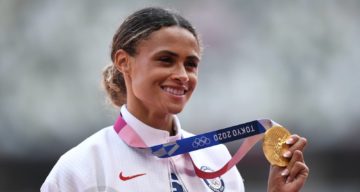 17-year-old Syndey McLaughlin became a household name, thanks to her talents on the track and in the field. The prodigy was only 16-years-old when she made it to the Olympics team, making her the youngest American track Olympian to qualify since 1980. For all the die-hard fans of the hurdles star, who are Googling terms like, “Sydney McLaughlin wiki,” “Sydney McLaughlin parents,” “How old is Sydney McLaughlin,” “400m hurdles finalists,” and “high school,” you’ve come to the right place, and we’ll tell you everything you want to know about the 400m hurdles semi-finalist.

Born on August 7, 1999, McLaughlin placed third in the 400m hurdles during the 2016 U.S.A Olympic Trials, to qualify for the 2016 Rio Olympics. It definitely seems like athleticism runs in the family, since both her parents, as well her older brother and sister are runners. Syndey’s father Willie McLaughlin competed in the 400m semi-finals at the 1984 Olympic Trials, while her mother Mary was a competitive sprinter during her high school years. As if that weren’t enough, her older brother Taylor is a runner as well and took home the silver in the 400m hurdles at the 2016 Track and Field World U20 Championships. Sydney’s oldest sibling, Morgan is a runner as well. Sydney currently studies at Union Catholic Regional High School in Scotch Plains, New Jersey.

My number one supporter #WillieMcLaughlin Love you dad ???? and wish me luck lol

Sydney started her career as a hurdler and sprinter at a young age, and has won many several prestigious awards so far such as the 2015-2016 Gatorade National Girls Athlete of the Year award. She has broken many records as well such as the national prep and junior records in the 400m hurdles.

The 17-year-old has come a long way from Brunswick, New Jersey but unfortunately, her historic run ended with the semi-finals at the 2016 Rio Olympics. She completed the race in 56.22 seconds and finished fifth, failing to qualify for the final race taking place on Thursday. Her fellow Americans Ashley Spencer and Dalilah Muhammad, the latter of whom is favored to win the gold, will compete in the finals.

The 400m hurdles finalists are:

Sydney remained optimistic and said, “It’s going to help me. I didn’t run the race I wanted to, but now I know what it’s like to be here and go through this kind of thing and have the pressures of sleeping in a dorm room and seeing your competition in the food halls. It’s just practice and getting ready for the future. This wasn’t my time. It just showed that this is not the time for me. Just being here is amazing for me.”

Of course, the experience of simply being at the Olympics was overwhelming on its own. Sydney exclaimed, “It’s so overwhelming. It’s been so much. You eat next to people you’re going to race against, world champions and Olympians. It hasn’t hit me yet that I’m here. There’s so much to take in at one time. I think I spend so much time during the year stressing about races that when you come somewhere like this, it makes every other meet look like nothing. I shouldn’t be as nervous as I am, and I think after running something like this, the nerves will definitely calm down.”