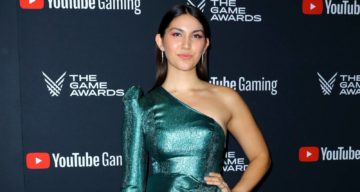 If you’re part of the gaming community, you’ve probably heard the name Sydnee Goodman. The YouTuber broke onto the online gaming scene and rose to prominence with her regular vlogs on everything that is trending in the digital entertainment space. Goodman now interviews celebs like Chris Pratt and Tom Holland and continues to serve as an inspiration in the predominantly male world of online gaming. Our Sydnee Goodman wiki highlights this awesome woman and her work.

Sydnee Goodman’s Dad Got Her into Gaming

Sydnee Marie Goodman was born on March 7, 1994 to Randy and Deena Goodman. Sydnee, her brother Calvin, and her parents are residents of California.

In case you didn't get a Christmas card, this is what we look like

After attending Chapman University in 2013, Sydnee acquired a BS in human biology from USC in 2016. But instead of the field of biology, Goodman is pursuing a career in the online gaming industry after her father sparked that passion in her.

“My dad is a huge nerd,” she said about entering the gaming world, “He loves video games but he was really into Halo: Combat Evolved. As a kid, he used to let me watch him play when I wasn’t afraid of watching. We spent a lot of time at home as my mom was sick so I just ended up playing more games with my Dad and my brother. That’s where it all began.”

Goodman Is an IGN Host

Though they helped her to fall in love with games, Goodman’s parents hoped for her to have a more traditional profession. To appease her parents, she applied for dental school and scored well beyond her own expectations.

However, she knew she would never be happy in a dentistry career and with great difficulty, broke the news to her parents that she would be pursuing a non-traditional career.

GAMESCOM 2019 is in the booo0oO0oks 👍 started the week off cohosting Opening Night Live and then went into shooting hellllLLLa field packages and jumping on stage for some interviews. It was a wild week making that haute content Conventions are always a mental and physical feat and never cease to remind me how grateful I am to be working in an industry I love with people who are kickass, hardworking, who are fun to hang out with 🔥 till next year! 🥳 and if you made it this far and you don’t know, these shows and the videos you watch require SO MANY people behind the scenes who absolutely crush it – from stage directors to technical directors, editors, producers, sound techs, line producers, and tons of people who’s jobs are integral to making these things happen. So extra thanks to them!

That brought her to IGN’s roster of hosts for The Daily Fix in early 2018. The website is a major phenomenon in the gaming community. Sydney hosts Daily Fix five days a week and other events by IGN.

“I remember while I was working at Red Bull Media House in one of my first jobs someone told me that if I want to be on camera that I need to be in front of the camera every single day. Whether this was filming myself, getting someone else to film me I had to be used to talking comfortably in front of the camera, “ said Goodman of entering this medium.

Besides streaming on Twitch, she also has a YouTube channel with vlogs that go beyond gaming where she talks about mental health and her personal life. She previously worked with BuzzFeed as a social media strategist.

Their love for gaming is what brought Sydnee Goodman and Alex Rubens together. Rubens, an SVP at KSE Esports, is a writer who has covered human interest stories in the gaming world, and also published books on the subject. And yes, he’s worked for IGN, too.

They first met at a Call of Duty tournament, which led to an interesting first date of “ping pong, arcade games, and savory bites.” They maintained a long-distance relationship until Rubens settled in Los Angeles with Goodman.

WE DID A THING. Ready for Phase 2 with @sydsogood 🙂

They tied the knot on June 2, 2018 while including video games in their wedding.