Susan Pompeo is in love with her hometown of Wichita, Kansas, and if given a choice, would never leave it. However, she made a move to Washington, D.C. when her husband, Mike Pompeo, currently the United States Secretary of State, got elected to Congress in 2010. She has worked alongside her husband in his campaigns for political office over the years and has a sharp intellect as well.  Pompeo has appeared in an election campaign ad alongside her husband and is working towards creating more leadership positions for women in Kansas.

Ever since Republican Mike Pompeo landed the position of U.S. Secretary of State in March 2018, he has had barely time to catch his breath. Given the huge responsibility that he is carrying on his broad shoulders, Pompeo needs his family and friends to rally around him. That’s precisely what his wife, Susan Pompeo, is doing steadily and firmly.

Here are a few details about Mike Pompeo’s wife from Susan Pompeo’s wiki. 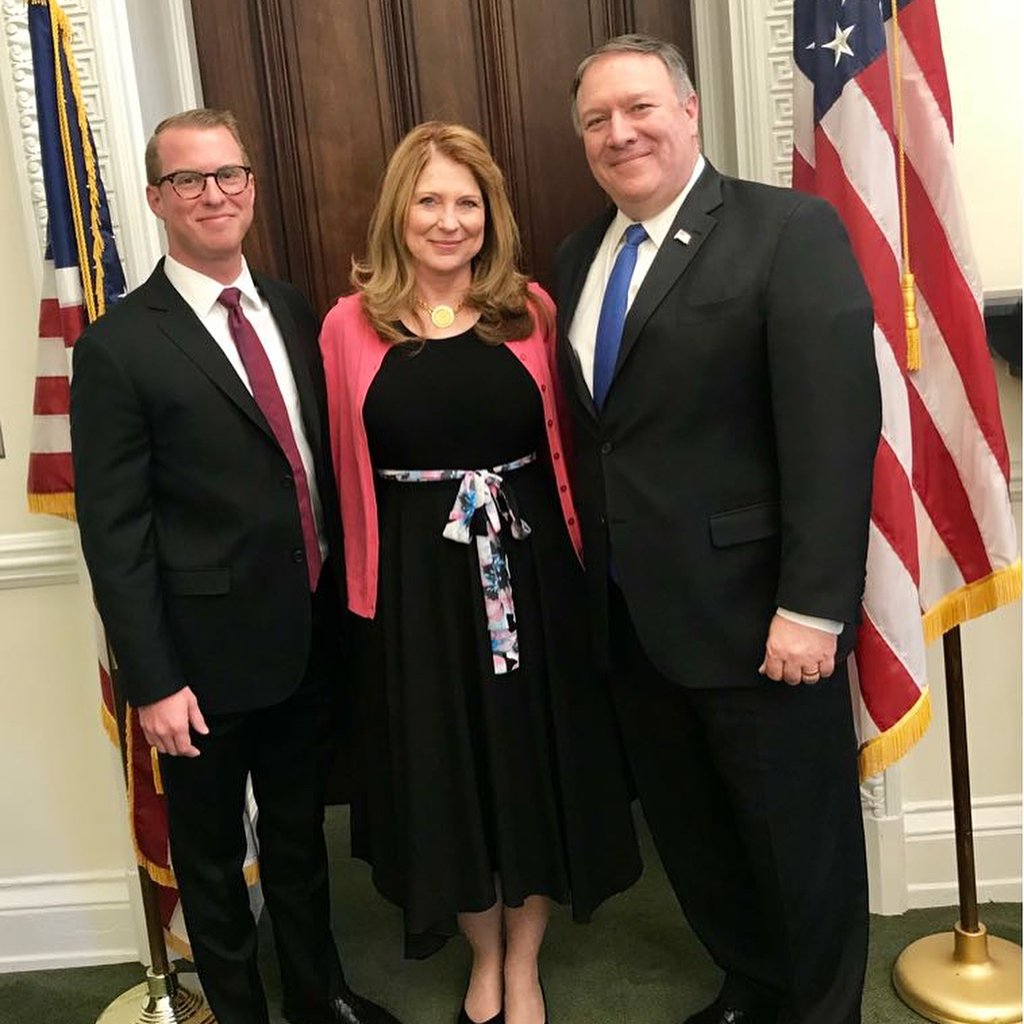 US Secretary of State, Mike Pompeo with his wife and Son. Credits: Instagram/npompeo

The couple has a son named Nicholas Pompeo who is 27 years old and lives in New York. He works at a tech start-up there.

They have two pets at home named Patton, a golden retriever, and Holly, a beagle.

Susan Pompeo attended high school in Wichita before she enrolled at the Wichita State University to further her education.

She got married to Mike Pompeo in 1991, and they have been together ever since. The politician is very attached to his and knows that she has been instrumental in his professional and personal successes.

In fact, Pompeo tweeted a message for his wife in 2016 on his Twitter account and wrote, “Happy anniversary to the love of my life, Susan!”

She Agreed to Move to Washington D.C.

Even though Susan Pompeo absolutely loves Wichita, she agreed to move to Washington, D.C. when her husband became a member of the House of Representatives. She maintained her links with her hometown by visiting the city with Pompeo at every available opportunity.

Susan Pompeo told a Wichita publication, “It used to be when someone was elected they bought a house and moved their entire family to Washington and that’s where they lived. That’s where the kids went to school. That’s where they made their home. But for us, it could never be home. Wichita is home, and we get back here as often as we can.”

When Mike Pompeo ran for the House of Representatives election in 2010, his wife was an essential part of his campaign. She said that she enjoyed the campaigning process even more than her husband did.

Susan Pompeo spoke to the media and said, “We decided we would do this together. We set out to do this like we would do any venture. I loved the campaigning part of it, much more than Mike did. We’ve laughed many times because there is no manual to tell you step-by-step how to do this, not even how to transition.”

No Free Rides for Anyone

Even after her husband won the House seat, Pompeo continued to help him without drawing attention to herself.

In 2011, when Sedgwick County Commissioner Karl Peterjohn crashed a fundraiser without paying, Susan Pompeo sent him a bill for $2,500.

She explained, “It’s my view that Karl wanted a ‘freebie.’ We rarely give freebies, and there were none at that event. We probably won’t get a dime from him, but hopefully, he won’t try to crash another event of others.”

Pompeo even appeared in a campaign ad when her husband was running for Congress in 2010. She appeared in a 30-second TV ad titled “Susan’s Boots,” in which she says that her husband is “just like his old army boots: tough, durable, and working step by step until the mission is done.”

Her husband then steps up to the camera and says, “I’m Mike Pompeo and I approve this message, and I’m crazy about the messenger.”

She Works for the Advancement of Women in Politics

Pompeo works with an organization called the Dwight D. Eisenhower Excellence in Public Services Series. It is dedicated to promoting female Republican leadership in the state of Kansas.
Every year, this organization sponsors a class of Kansas Republican women, and they hold their events on Saturdays.

She is a devout Christian. Pompeo and her husband are affiliated with the Evangelical Presbyterian Church.

Pompeo is not just about work and takes time out regularly to pursue her other interests as well. She likes to watch movies and counts Will Smith and Angelina Jolie as among her favorite Hollywood stars.

She loves American cuisine and spends her free time cooking, traveling, and reading. Her favorite place in the whole world is London, England.

Standing by Her Man

Now that Mike Pompeo is the United States Secretary of State, he needs the support of his wife more than ever. The United States is in an awkward position in a dangerous world where the future is uncertain.

However, Susan Pompeo has faced many challenges before. And there is no doubt that she is standing by her man and country even now.