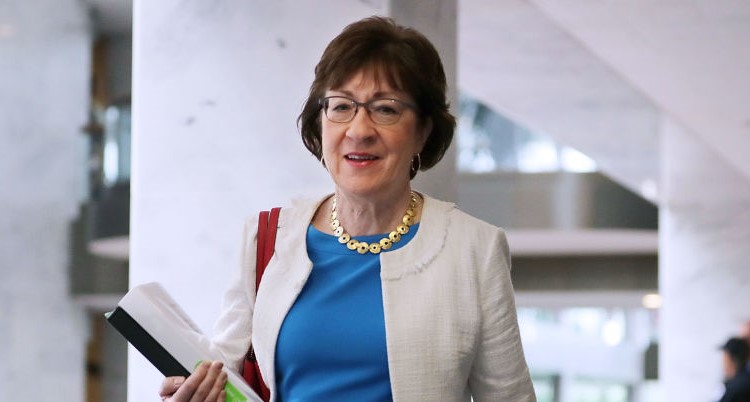 What’s the status on Senator Susan Collins’ governor run? Many in her party were curious to know what her future plans are for the governor’s office and awaited her statement. Is Collins running for Maine governor? Here’s all the information you need about the senator, with our very own Susan Collins wiki.

Who is Senator Susan Collins?

Susan Collins’ age is 64 years old and she was born Susan Margaret Collins on December 7, 1952, in Caribou, Maine. She was raise by parents Patricia and Donald Collins. Her family ran their fifth-generation lumber business, the S.W. Collins Company, which was founded in 1844 by her ancestors. Her father is retired and was a Maine state senator, while her mother, also retired, is a former Caribou mayor, as well as a former chairwoman of the board of trustees of the University of Maine System. Susan attended Caribou High School and is a Phi Beta Kappa graduate of St. Lawrence University

In August 2012, Collins married Thomas Daffron, 78, who is the chief operating officer of Jefferson Consulting Group, a Washington-based lobbying and consulting firm. His late parents were Katherine and Thomas Daffron, Jr. and they lived in Suffern, New York. His father was a retired assistant news editor at The New York Times and was also managing editor in Paris for the newspaper’s International Edition in the 1960s. Collins’ husband is a graduate of Brown and received his Master’s from Columbia, in journalism. He was chief of staff for Senators William Cohen, Fred Thompson, and Lisa Murkowski. The couple got married at Gray Memorial United Methodist Church in Caribou, performed by Rev. Dr. Thomas Bentum.

Is Collins Running for Governor?

If you checked out Susan Collins’ Twitter lately, then you may have read her latest update. After much speculation, the longtime senator (who has held that position since 1997) announced that she will not pursue the office of Maine governor.

“I am a congenital optimist and I continue to believe that Congress and can and will be more productive,” Collins said. “I want to continue to play a key role in advancing policies that strengthen our nation, help our hard working families, improve our healthcare system, and bring peace and stability to a troubled and violent world. And I have concluded that the best way that I can contribute to these priorities is to remain a member of the United States Senate.”

Supporters of the senator applauded her choice to stay in her current office and stay with Congress.

“Her staying obviously keeps an essential voice in our conference especially in areas where she’s worked a lot, like health care, she’s just got great leadership and great ideas. And as a fellow woman, a Republican woman in the Senate, this is a good thing,” Sen. Shelley Moore Capito (R-W.Va.) said in an interview Friday morning. “If she had left I think it would’ve been obviously be difficult to replace her and probably difficult to replace her with a Republican. Certainly she’s irreplaceable as a friend.”

The current Maine governor is Paul LePage, who isn’t allowed to run for governor again, due to term restrictions. Susan Collins’ healthcare policy continues to be a primary concern for her platform and she will be able to continue her term, until it ends in 2020.