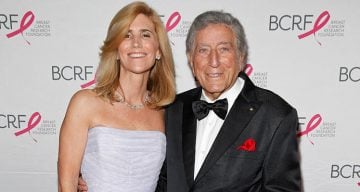 Earlier this year on August 3, world renowned singer Tony Bennett turned 90! It’s been several months since then, but now the public is getting the opportunity to celebrate with him, thanks to his new album, Tony Bennett Celebrates 90. He also released his new book, Just Getting Started, and will be starring in an NBC special that will air tonight (December 20). The special was taped on September 15 in New York City and features artists such as Stevie Wonder, Lady Gaga, Michael Bublé, Kevin Spacey, Andrea Bocelli and more. At alternate locations, performances by Elton John and Billy Joel were taped and will appear on the CD and the broadcast. Tony Bennett’s net worth is $110 million, and with the success of this special, we can only imagine it will increase!

Anthony Dominick Benedetto has reached a huge milestone in his decades of success and people are curious about who is Tony Bennett’s wife. If you’re searching for Susan Bennett wiki, we’ve got facts you need to know about the singer’s wife. She was born Susan Crow, but goes by Susan Benedetto, taking Tony Bennett’s original last name instead of his celebrity name. Searching for Susan Bennett may take you to a different woman—likely the voice of Apple’s Siri. To save you the trouble and the confusion, here are some fun facts about the singer’s wife!

She Goes by Susan Benedetto

Seeing the beautiful young woman at his side has caused people to ask, how old is Tony Bennett’s wife? Susan was born September 9, 1966, making her 50 years old. At one of his concerts in the late 1980s, Bennett met Susan, a former New York City social studies teacher who was 40 years younger than him. But Tony Bennett and Susan Crow’s age difference didn’t bother the couple at all. According to People, Bennett once said, “She has a rare talent that makes me feel like it’s the first week I’ve met her.” The couple married in a private ceremony in New York on June 21, 2007 and have been together ever since.

Bennett “Met” His Wife Before She Was Born

Tony Bennett’s wife’s age has been a controversial subject for many people in the past. According to his new book, Just Getting Started, which was released on December 20, he met his wife’s parents, Marion and Dayl Crow, when Marion was pregnant with Susan. The parents were dedicated fans of the musician and after one of his concerts in 1966 in New York City, they went backstage to pose for a picture with the Italian-American singer. In his book, Bennett recalls the story, “As fate would have it, Marion was pregnant at the time with … Susan! It’s a photo we all laugh about, knowing the incredible turn of events that followed.”

The age difference was a bigger deal at the beginning, but Bennett wrote in Just Getting Started that after so many years together, they don’t even notice the difference. “We’re compatible in all ways,” he said. “She’s brought balance and contentment into my life,” writes Bennett of his wife, proving how truly in love with her he is, and has always been. “Her goodness and the peace at the center of her soul have helped me to think straight, live well, and, I’m quite sure, live longer.”

She is a Huge Bennett Fan

As reported by People, the book also revealed that as a teenager, Susan was the president of Bennett’s fan club in the San Francisco Bay Area in California. When she was nineteen, she finally met her famous future husband after asking to meet him backstage at a show. “It tickled me that someone of her age was so devoted to my music,” Bennett reflected. “I not only agreed to say hello to her backstage, but asked her to be my date for the evening, and that’s how it all really began, foreshadowed by a backstage photo taken in 1966!”

The couple co-funded a charitable organization that focused on creating, promoting, and supporting education in the arts. Exploring the Arts (est. 1999) worked with 17 schools in Los Angeles and New York. That same year, they also co-funded the Frank Sinatra School of the Arts in Queens, NY, a public high school dedicated to the performing arts. The school opened in 2001 and received its own building in 2009. The school cost $78.0 million to build after the city donated the money to ETA.

Susan also owned Creative Artists Management in New York and while she was in college, she interned for the White House’s Presidential Advance Office.

She is Bennett’s Third Wife

Former Tony Bennett’s wives include Patricia Beech from 1952 to 1971, and Sandra Grant from 1971 to 1983. After his divorce from Grant, Susan and Bennett started dating and finally tied the knot in 2007. They enjoyed a romantic honey moon in Italy. In 2011, Bennett was asked why it took him so long to get married, to which he responded “I’m always busy.” “He’s not joking,” Susan confirmed. Though Susan Bennett’s net worth is not known, we have no doubt her husband, who’s worth millions, is taking good care of her!