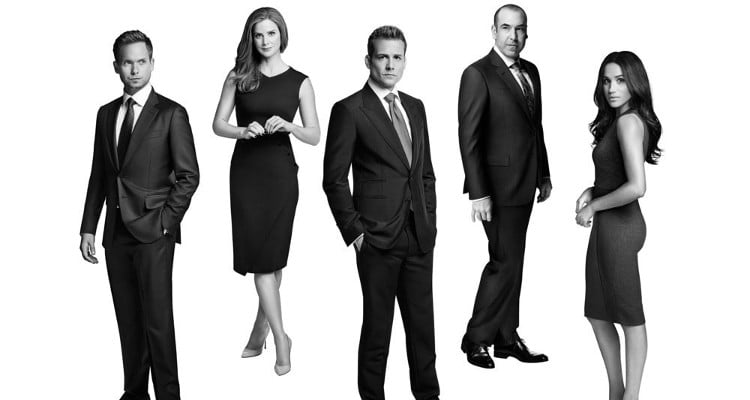 The main cast of Suits will remain the same except for Gina Torres, who played Jessica Pearson, as she left the show last season. The other cast members of the show are Gabriel Macht, who plays Harvey Specter, and Patrick J. Adams, who plays Mike Ross. Then there’s Sarah Rafferty as Donna Paulsen, Rick Hoffman as Louis Litt, and Meghan Markle as Rachel Zane. Dulé Hill is a part of the recurring cast, who plays Alex Williams.

Prepare for all the feels. Check out photos of the #Suits cast from the table read of the pilot episode at @atxfestival.

The premiere episode of season 7 of Suits is titled “Skin in the Game.” Speaking of Alex Williams, fans will see him making an appearance in episode 2 of season 7. The second episode will air on July 19, 2017. In the first episode of season 7, Mike Ross is officially a lawyer. He immediately joins Harvey Specter, who has become the firm’s managing partner.

These guys mean business. Reunite with P.S.L when #Suits premieres tonight at 9/8c on @usa_network.

The premiere episode also shows Rachel (Meghan Markle), who is Mike’s fiancée in the series; she tries to determine where she fits in all of this. Rachel is also a full-fledged lawyer now, who is on her way to creating a successful career. The couple will face a little difficulty in their relationship because of their demanding jobs and little time to spend with each other. Also, the episode shows Louis (Rick Hoffman) ordering around a bunch of new associates.

After Jessica leaves the firm, Harvey becomes the new boss of Pearson Specter Litt. During an interview, Gabriel Macht said, “They found a way to get Mike back in because there are always openings in the law, right? So we’ll see if we get back to the bromance and the light fodder of the show’s early seasons.” He further added, “There was a bit of a tease of that in the deal Harvey makes with Mike at the end of Season 6. With Donna, I think there are a lot of questions like can she still work for him? Is she gonna take another break? Is she gonna move on? Is he gonna hire her in a different capacity? Are they gonna just completely break it off and get together?” There are so many questions that need answering!

Now that we gave you a little heads-up on the premiere episode of Suits season 7, make sure you catch up on it today. Suits season 7, episode 1 will air tonight, July 12 at 9:00 p.m. EST on the USA Network. Also, if you haven’t taken a look at the season 7 premiere trailer, then feel free to check the link below and let us know what you think about the season 7 premiere of Suits in the comments section below!