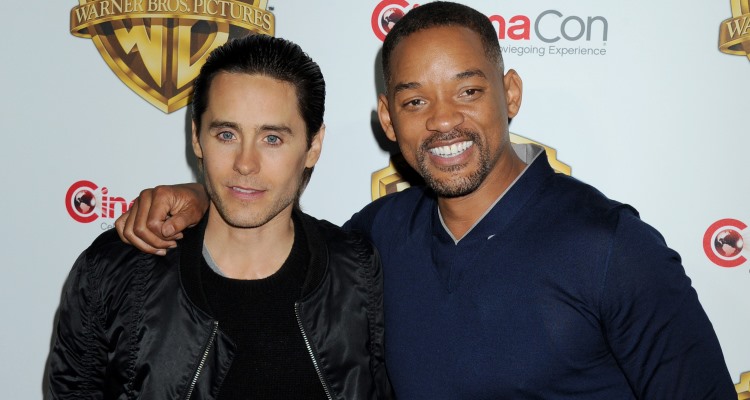 While the Suicide Squad reviews are beginning to appear online, attention has shifted to rumors of disdain between two of its cast members, Will Smith and Jared Leto. That’s because it was reported that Leto’s method acting didn’t sit well with Smith, leading the latter to make some disparaging comments about his costar. However, even newer material about these comments has just been made available that changes things. Is it true that Will Smith doesn’t like Jared Leto? Here’s the details on this story about Will Smith and Jared Leto stemming from the release of Suicide Squad.

For those who don’t get out to the movies very often, Suicide Squad is the latest film in DC Comics’ film genre, which began with Man of Steel and most recently Batman v. Superman: Dawn of Justice. The film features a team of supervillains enlisted by the U.S. Government to engage in high-risk black ops missions in return for a reduced prison sentence, with bombs attached to each criminal to keep them in line.

This live-action iteration of the comic book team features Will Smith as Deadshot (one of the world’s best assassins) who commits crimes while still trying to raise his young daughter to be a better person than him. Deadshot is usually the team leader in the comics, and given Smith’s top billing, that likely won’t change in the film. As for Jared Leto, he is the latest actor to take on the role of Batman’s arch-nemesis, The Joker, who, while not a member of the titular team, likely plays an important role in the film’s plot.

Set to release in theaters on Friday, August 5, Suicide Squad reviews differ greatly between critics and fans. Professional reviewers thus far have not been kind to the film. It currently holds a 33% on Rotten Tomatoes based on 72 reviews, with more to come between now and the end of Friday. However, fans remain optimistic that critics simply lack an understanding of the source material, as 98% of almost 55,000 people are still interested in seeing the movie.

Does Will Smith Hate Jared Leto?

While it may not reach the critical heights of Heath Ledger’s performance, Jared Leto’s take on the “Clown Prince of Crime” will be notable for his dedication, apparently having stayed in character during the entire filming process. Apparently while on set, he sent his cast mates unnerving gifts based on their roles; for example, Margot Robbie, who plays former Joker sidekick and love interest, Harley Quinn, received a love letter and a rat. How romantic! “I’ve never actually met Jared Leto. We worked together for six months and we’ve never exchanged a word outside of ‘Action!’ and ‘Cut!’” said Will Smith on Jared Leto, showing just how deep this commitment to the performance ran.

But apparently Smith said that nine months ago. Since then, he’s been reported to have said something else more recently, which had everyone believing that Will Smith hates Jared Leto. “I straight up do not like that dude. He’s an ass,” said Smith according to the website, Above Average. The article also claimed the actor was upset about the time Leto threw a dead pig on the table during a script reading. It was also reported that Smith didn’t invite him to a cast party because Leto would steal and/or damage his property.

The news that Will Smith doesn’t like Jared Leto quickly made the rounds on social media, but people appear to have gotten more than a little ahead of themselves. For one, Above Average is a comedy web site, so nothing on it should be taken too seriously; don’t feel bad if you were fooled, even to this day people still think that articles on The Onion are real! Further disproving that Will Smith hates Jared Leto is the fact that the PR person cited in the article doesn’t exist and that the quotes are said to be taken from Smith’s recent appearance on Good Morning America, where he said no such things about his costar. However, he did say the bit about the dead pig is true, though. Ew!