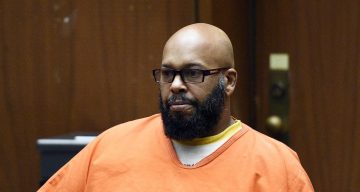 Suge Knight has had a massive influence on the music industry after he cofounded the studio that brought the likes of Snoop Dogg and Tupac Shakur to the attention of the public. However, he has also had his share of legal troubles and is currently in custody, awaiting trial for murder. Unfortunately, debt, legal troubles, and more have whittled Knight’s estimated net worth down to $200,000. Keep reading to learn how he his made money—and where it all went!

Marion Hugh Knight Jr., who is better known as Suge Knight, made most of his wealth as a record producer and music executive after founding Death Row Records. However, he also briefly played in the NFL.

Many of his signed artists became some of the biggest names in rap and hip-hop. But his studio filed for bankruptcy in 2006, and its assets were eventually auctioned off.

Following the loss of Death Row Records, along with the legal bills he incurred, Suge Knight’s net worth in 2018 is now estimated at just $200,000. He has started a new music label to increase that number, but his current incarceration on a murder charge has put those plans on hold.

Knight was born April 19, 1965, in Compton, California. He had a normal childhood and was nicknamed “Sugar Bear” while growing up. And “Suge” was later derived from this childhood moniker.

He graduated high school in 1983 and attended El Camino College until he transferred to the University of Nevada, Las Vegas, playing football at both schools.

After finishing college, Knight was invited to the Los Angeles Rams’ training camp after failing to get drafted by the NFL. He played two games for the team as a replacement player in 1987 due to a players’ strike.

After his brief NFL stint, Knight went on to work as a bodyguard and concert promoter. From there, he decided to open his own music publishing business in 1989.

The first notable addition to Knight’s estimated net worth came when Vanilla Ice handed over royalties from the song “Ice Ice Baby.” It included material from one of Knight’s earliest clients.

However, this deal came after Knight and his bodyguards allegedly threatened Vanilla Ice. Vanilla Ice even claimed that Knight had threatened to throw him off his hotel balcony if he didn’t give up the royalties!

In 1991, Knight cofounded Death Row Records alongside Dr. Dre and The D.O.C. But afterward, Knight allegedly used threats of violence to get them out of their contracts.

The label saw great critical and financial success after signing the likes of Dr. Dre, Tupac Shakur (who signed after Knight posted bail for him), and Snoop Dogg.

Death Row Records served as the primary source of Knight’s net worth. However, he also owned a private nightclub in Las Vegas.

Furthermore, Knight, to this day, is suspected of having played some part in the deaths of Shakur and Notorious B.I.G.

The company’s end came in 2006 when both Knight and the company itself filed for bankruptcy. The label’s lack of money—and the major blow to Knight’s estimated net worth—came as a result of a civil lawsuit filed by Lydia Harris, the then-wife of cocaine dealer Michael Harris.

Harris claimed that she had provided Knight with $1.5 million in seed money to found Death Row Records. She was reportedly awarded $107.0 million in damages, both for money owed and for defamation of character, as Knight had often called her “promiscuous” during public appearances.

Most of Knight’s earnings after this came from selling his assets, including his Malibu home, which reportedly sold for $4,560,000 in 2008.

During its heyday, Death Row Records was an insanely lucrative business for Suge Knight. In fact, at one point, it was reported that the label sold over 150 million albums worldwide and generated a net revenue of $750.0 million.

But due to legal woes, Suge Knight’s net worth has taken quite a few hits.

During his incarceration, Knight has been hit with medical problems and reportedly could not afford to post bail. However, it was reported in 2015 that his bail was reduced to $10.0 million from $25.0 million but still couldn’t afford to pay that amount.

Knight has had many run-ins with the law, but there are too many to list here. Not only was he often involved in some seedy arrangements, but he’s also been shot more than once. However, it could be argued that none of that compares to his current situation.

On January 29, 2015, Knight was reported to be part of a hit-and-run in Compton on the set of the 2015 movie, Straight Outta Compton. Footage from the security camera show’s Knight’s truck barreling into two men, Terry Carter, 55, and Cle “Bone” Sloan.

Knight turned himself in early the next day. He was arrested on suspicion of murder and attempted murder.

According to witnesses, the incident reportedly occurred after an argument between the men on the set of the movie. Knight then allegedly followed the other two to a burger stand parking lot.

So, in other words, the hit-and-run appeared to be intentional.

In 2017, Knight was also indicted by a grand jury on charges of threatening death or bodily injury against the director of Straight Outta Compton, F. Gary Gray. Knight pleaded not guilty to all charges.

Since entering jail, Knight’s often-changing legal team has claimed he has suffered from numerous health complications and cited poor treatment. Whether it’s coincidence or not, these claims have often been made on the same day as his bail proceedings.

In April 2018, just ahead of his postponed murder trial, Knight was rushed to the hospital for undisclosed reasons.

That same month, a hoax was circulating that claimed Knight had been stabbed and killed in prison by an assailant who used honed chicken bones as a makeshift weapon. However, the reports turned out to be false.

Before his incarceration, Knight had started a new label, Black Kapital Records. He was looking for a distributor at the time of the hit-and-run and his subsequent arrest.

So, until he leaves prison, the company remains in limbo, as does any potential increase to Suge Knight’s estimated net worth.