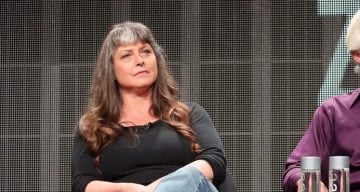 Sue Aikens lives in one of the most northern points of the United States that you can get. It’s a solitary and cold life. Well, not if you get a reality TV show crew following your every move —then you’ve got plenty of company! Read all about the life that led Aikens to Alaska, Sue Aikens’ husbands, and everything you ever wanted to know about her in this Sue Aikens wiki.

Sue Aikens was born on July 1, 1963, in the small town of Mount Prospect, Illinois. Aikens tends not to talk much about her personal life, especially regarding her life before the show.

However, we do know that Aikens originally moved to Alaska at a very young age with her mother. She fell in love with the landscape and nature. While she lived away from Alaska from time to time, she always seems to end up coming back to the state.

As far as other details about Aiken’s personal life go, it appears that she has been married twice. Her second husband reportedly passed away years ago, before she took over the Kavik River camp.

A few years ago, Aikens began to make small appearances on other Alaskan-based reality TV shows, like Sarah Palin’s Alaska and Flying Wild Alaska. By the time Life Below Zero came along, she had been running the Kavik River camp for several years. Since then, she has become a fan favorite on Life Below Zero.

What Happened to Sue on Life Below Zero?

To celebrate the Season Finale of #LifeBelowZero #TheThaw we’re giving away a Life Below Zero poster featuring #SueAikens! Just like this post, and follow us on Instagram and you’ll be entered in the drawing! The winner will be announced tomorrow!

In February 2017, she sued producers of the television show for breach of contract, interference with Aikens’ business, and intentionally causing her emotional distress. Most of these issues stem from what Aikens says was “an unsafe working environment.”

Due to her contract, she reportedly felt that she couldn’t say no to producers’ requests. One such request had Aikens working outside without a face mask or helmet so that viewers could see more of her face, and connect better with the audience. She alleges that she got frostbite and was unable to work at the camp for several days.

Aikens also alleges that she was talked into driving a snow machine in unsafe conditions, which resulted in a crash and injury. The crew then reportedly stayed back from helping the injured Aikens in order to get more footage to create drama for the TV show.

Despite the lawsuit, Aikens is not only appearing on episodes of the latest season, but is also promoting the program on her various social media channels. However, it is unclear if these episodes were shot before the lawsuit.

According to our research, the case is still pending. So, the results of the lawsuit may be a factor in whether or not Sue Aikens will make future appearances on the show.