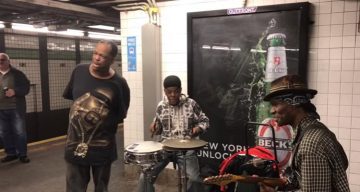 We all know subway singer Mike Yung from America’s Got Talent, but some might know him before he was on the show. He’s the man with the golden voice who sang in New York subway stations for 37 years, until someone finally caught him on camera, and he became a viral star! Passengers would film him singing and when he finally made it out of the underground and onto the big AGT stage, the world saw his immense talent. Find out more from our Mike Yung wiki, right here.

Mike Yung is the subway star who is now on AGT. His voice was literally underground all these years! Though many people filmed him during their commute and posted the videos on social media to rave reviews, he was truly recognized after he took center stage on AGT. Tonight, we will watch him perform for a spot in the quarterfinals, and with the right song, he can definitely blow everyone away again! There’s a lot more to Mike Yung than meets the eye, so keep reading our Mike Yung wiki!

Mike Yung was introduced to music when he was 15 years old. He met producer and writer Teddy Vann in 1975, who was known for co-writing “Santa Clause is a Black Man” and “Power of Love.” They met at Harlequin Studios and Yung was signed with RCA Records with Ron Moseley. In an interview with Pitchfork, Yung explained how he got started. “Then I went to CBS, at 18. Then I got another contract with Jim Tyrell, who started a company called T-Electric. He signed Etta James, he signed Love Committee, and he signed Mike Yung,” he said about himself.

Tyrell, a former VP at CBS Records, was the man behind T-Electric Records in 1979. The company released Etta James’ 1980 album, Changes, and according to Yung, his album was next to be released. But by the time anything could happen, the company went bankrupt and Yung’s career ended before it could even start. He remembers his plight saying, “Nothing came of that. But you continue to do what you can do to pay your bills and keep your head from going insane.”

Yung only wanted to sing, and it was a difficult time for him. He worked for the city’s Department of Parks & Recreation for a while but spent the last 20 years paying bills by busking at the 23rd and 6th Avenue subway station in New York.

A Reddit user posted an AMA with Mike Yung, who revealed that he makes “about 100 bucks a day.”

“Most we ever made was 400 dollars per person one time. People carry less and less cash. So these days I’m lucky if I make a $100. There’s been many times lately I walk away with nothing. I don’t blame people for not having cash. Just making them smile is enough,” said Yung.

There is also a great focus on Yung’s gospel singing, that always draws a crowd. Some even recognize him from YouTube videos posted by spectators, while others just know him from seeing him at the station every day. Anyone who listens to him says that his honesty and dedication somehow pours into his voice. With the fan following he has today, we can only imagine what such a talent could have done if he had more success in the beginning of his career. But none of that matters to Yung; he only focuses on making sure the world can hear him sing.

When he first sang “Unchained Melody” on America’s Got Talent, fans from Yung’s YouTube viral videos knew of him, but did not know his name. Though Mel B. was not very impressed, the other judges gave him a thumbs up, happy he’s made it this far!

Watch him perform “Unchained Melody” on AGT below and don’t forget to check out his performance tonight at 8:00 p.m. on NBC!