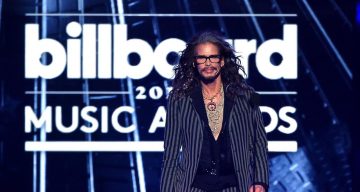 Steven Tyler has been the frontman and lead singer of the famous hard rock band, Aerosmith, for close to 48 years now, and he still sounds as good as ever. Thanks to their multi-million selling albums and singles, Steven Tyler’s net worth is estimated at $130.0 million—and still growing! While others his age are hanging up their boots, Tyler is raring to undertake another world tour. They don’t make rock stars better than Steven Tyler!

Make no mistake. Note for note, Steven Tyler is one of the greatest rock and metal singers of all time.

In fact, he isn’t called the “Demon of Screamin’” for nothing! Few singers can rival Tyler’s high-pitched screams, wide vocal range, on-stage acrobatics, and high-energy performances. And at the age of 70, he’s still killin’ it in the music biz!

Who Is Steven Tyler?

Steven Tyler is an American singer-songwriter, instrumentalist, and most recently, former American Idol judge. He is most famous for being the lead singer and frontman of the Boston-based legendary hard rock band, Aerosmith. Tyler sometimes plays the harmonica, as well as piano and percussion.

Thanks to the sales of the band’s albums and singles, live concerts and tours, music videos and DVDs, along with their appearances on TV, commercials, film, and video games, Steven Tyler’s estimated net worth is $130.0 million. It is still growing thanks to the band’s music, which has delighted fans across the world for the last 48 years. 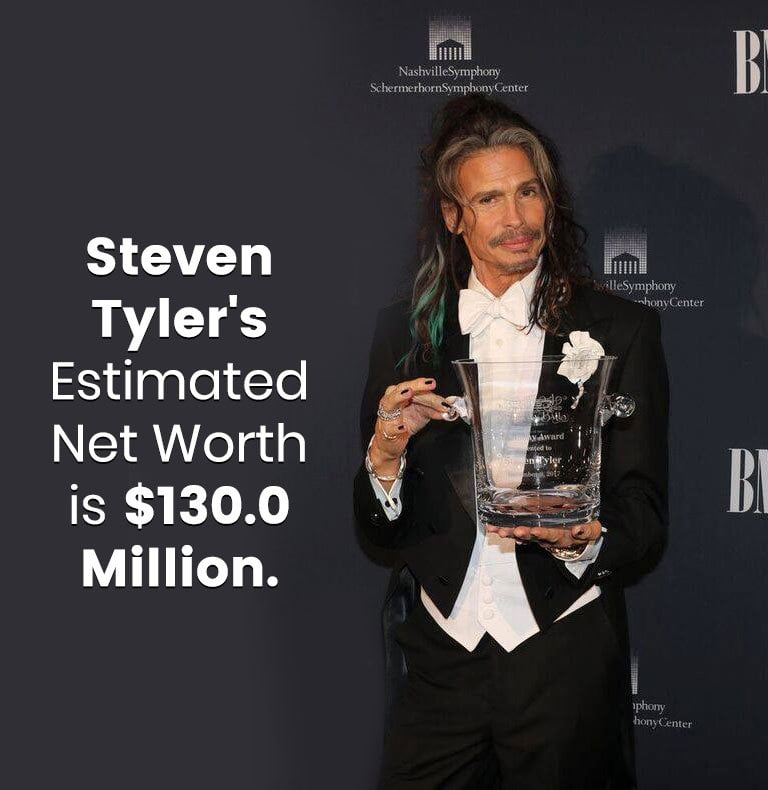 But who is the richest rock star in the world?

It’s none other than ex-Beatle, Paul McCartney! His estimated net worth in 2018 is $1.2 billion.

Music in the Family

Born Steven Victor Tallarico on March 26, 1948, in New York City, New York, Steven Tyler is 70 years old. Even today, many believe that Tyler’s enthusiasm and energy for singing and performing puts many younger artists to shame.

Tyler’s mother was Susan Blancha, a secretary. Meanwhile, his father, Victor Tallarico, was a classical musician and pianist who taught music.

In the mid-‘60s, Tyler spent time in Greenwich Village in New York, where he saw a Rolling Stones live concert at the impressionable age of 17. It changed his life, and from then on, he loved their music more than anything else.

The chemistry between Mick Jagger and Keith Richards blew him away, and he aspired to be in a rock band just like them. So, Tyler started writing songs and met his future bandmate, guitarist Joe Perry, in Sunapee, New Hampshire, in 1969.

In 1970, Tyler formed his own band named Aerosmith, along with bandmates Joe Perry, Tom Hamilton, Brad Whitford, and Joey Kramer. It was then that one of the greatest rides in rock and roll began.

Aerosmith released their eponymous debut album in 1973 followed by their second album, Get Your Wings, in 1974. They had a moderate hit with their single, “Dream On,” which would go on to become one of their signature songs.

The band’s subsequent albums, Toys in the Attic and Rocks, brought them mainstream success. They spawned the hit singles, “Sweet Emotion,” “Walk This Way,” “Back in the Saddle,” “Last Child,” and “Home Tonight.”

Since then, Aerosmith has released some of the best and most successful albums in hard rock, including:

Some of their singles, which have become classics are:

Tyler has had a solo career of his own after spending most of his career fronting Aerosmith.

On July 15, 2016, Tyler released his album, We’re All Somebody from Somewhere, which spawned singles like:

Collaborations with Other Artists

These days, Tyler often performs with his own backing band called The Loving Mary Band to promote his solo career and work. He has also worked with artists from other genres as well, like Run-D.M.C., Alice Cooper, P!nk, Eminem, Santana, and Orianthi.

Some of the songs that have emerged from these musical collaborations are:

Not only has Steven Tyler created a ton of great music with Aerosmith over the years, but he has also become a very wealthy man while doing it. 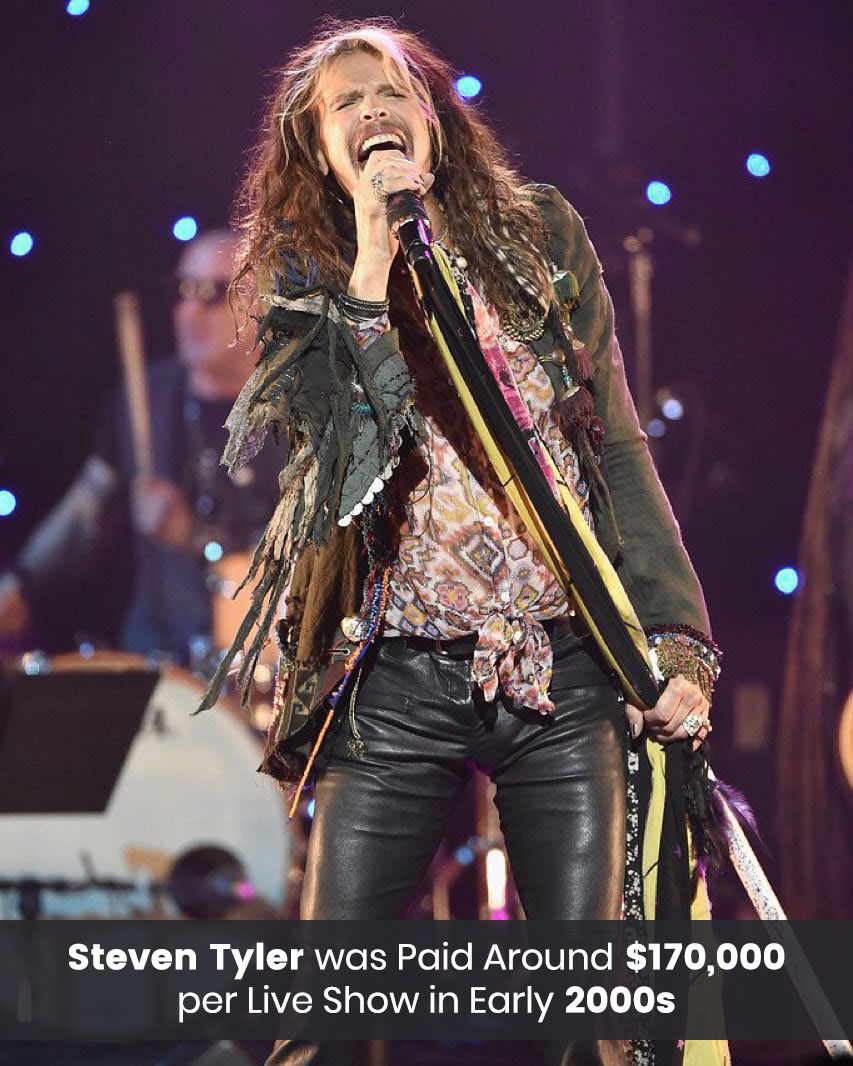 Steven Tyler was Paid around $170,000 per Live Show in Early 2000s. Credits:Instagram/iamstevent

He was also getting a share of the estimated $75,000 earned from nightly merchandise sales. This means that Tyler was taking home almost $200,000 after every performance!

Lending His Name to Products

In 2016, Tyler appeared in an innovative commercial for Skittles candy, which was aired during Super Bowl that year.

In 2018, the singer appeared in a commercial for the new Stinger GT sports sedan manufactured by Kia Motors America. The ad was aired during the Super Bowl 2018 and Tyler went home with an armful of money.

A Passion for Motorbikes

Tyler, who has been a long-time rider and enthusiast of motorcycles, helps design the bikes that are built in Manchester, New Hampshire.

A Roomful of Awards

In 2001, Aerosmith was inducted into the Rock and Roll Hall of Fame, which was a recognition of the achievements that Tyler and his bandmates made over the years. They were also named MTV’s Icon in 2002.

In early 2012, Tyler purchased a beautiful house on the island of Maui in Hawaii for himself, which reportedly cost him $4.8 million. 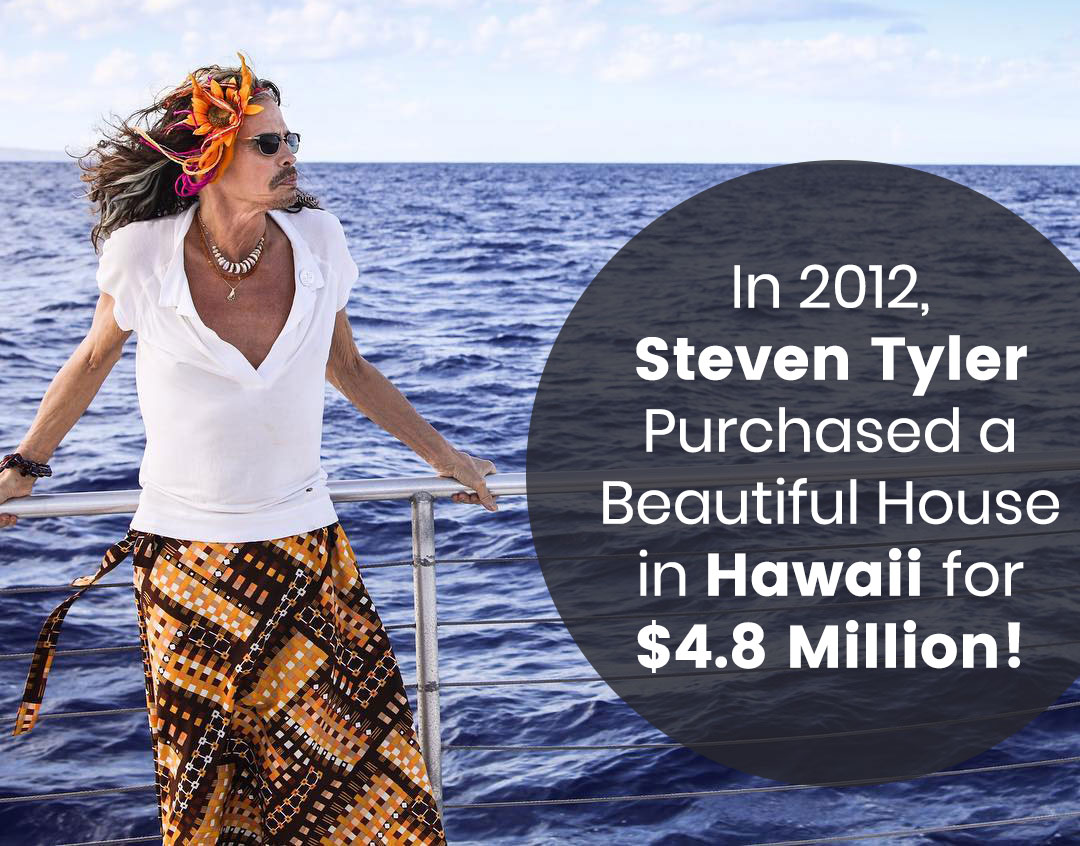 In 2012, Steven Tyler Purchased a Beautiful House in Hawaii for 4.8 million. Credits:Instagram/iamstevent

The beachfront mansion boasts an area of 3,000 square feet with two bedrooms and three and a half bathrooms. It also has outdoor decks that provide unbelievable coastal views.

The house was initially built in 1988 with glass walls, wood, and stone flooring, which are all built around a floor-to-ceiling aquarium!

Tyler loves fast cars, and he definitely proved it by buying the world’s fastest convertible, the Hennessey Venom GT Spyder! The company custom built it for him as he has requested one with no top. (C’mon, he’s got to feel the wind through those luscious locks of his!) 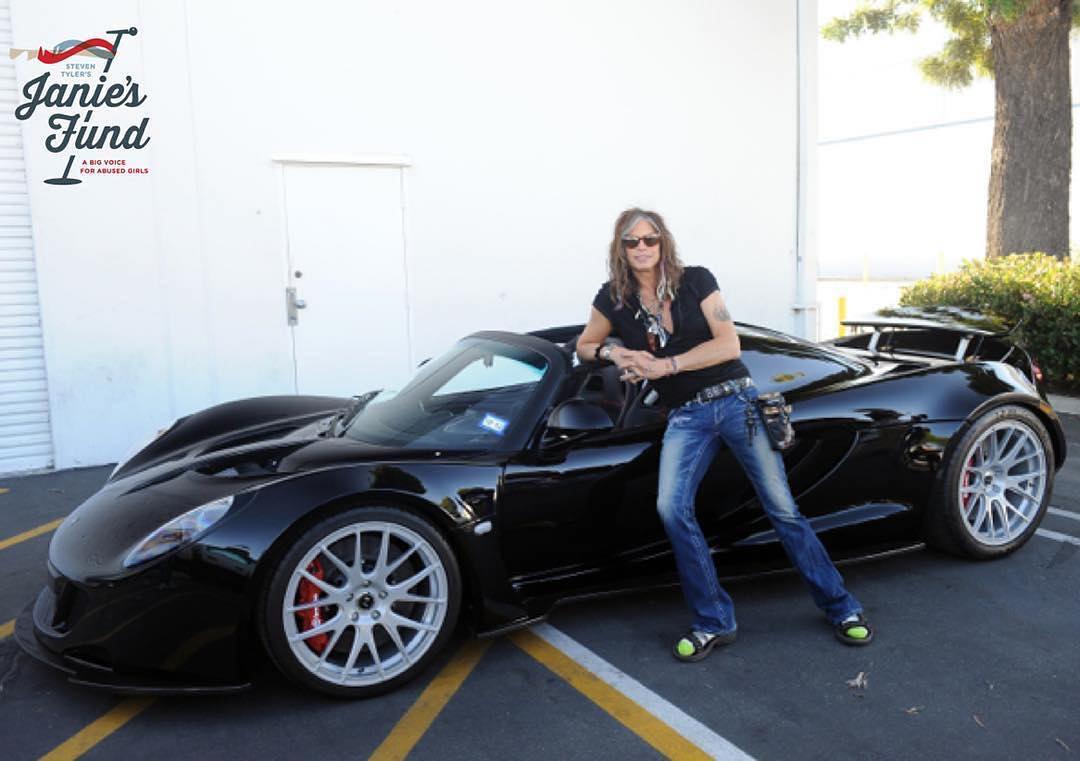 Only five of these cars were built in 2013. And it cost Tyler a good $1.1 million to own one for himself!

The rocker has his own collection of both new and old cars, which he has personally selected to buy. They include a Porsche Turbo ($257,500) and a Panoz AIV Roadster. 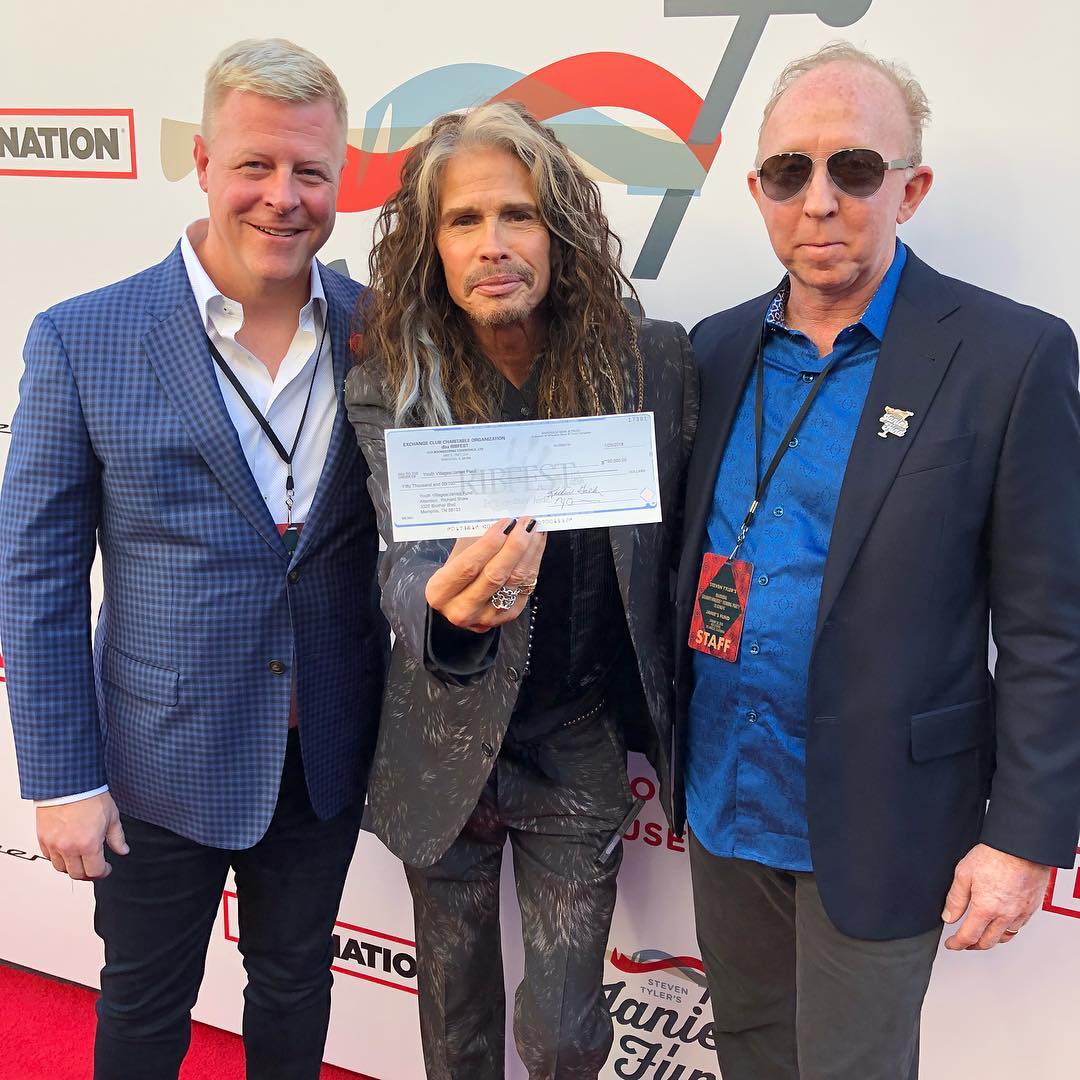 Steven Tyler at a gala for Janie’s Fund. Credits:Instagram/iamstevent

These days, Tyler is busy planning an Aerosmith tour. It could very well go on until 2021, as audiences all over the world are anxious to see the “Bad boys from Boston” back in action! Rumor has it, they might also start work on a new album!

Tyler is personally involved in the charity he set up in 2017 called Janie’s House. It is a women’s shelter for abused girls located just outside of Atlanta, Georgia.

After seeing both great highs and lows in his career and personal life, Steven Tyler is an all-American success who never believed in the word “quit.”

Steven Tyler’s Worth Compared to Other Rock Stars