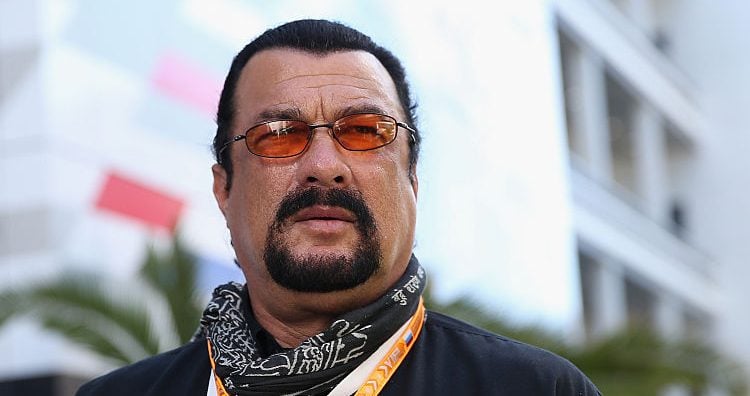 Following the Harvey Weinstein bombshells, it seems that several other actors are being called out for claims of sexual misbehavior. Martial artist and actor Steven Segal, 65, has been named by Portia de Rossi for allegedly sexually harassing her in the past. With these allegations, many are wondering about Steven Seagal and Erdenetuya Seagal’s marriage. Keep reading if you want to learn more about these claims and Steven Seagal’s wife.

Erdenetuya Seagal’s age is unknown, but chances are, she’s younger than her husband. She was born in Mongolia as Erdenetuya Batsukh, better known as Elle.

According to IMDb, Erdenetuya Seagal was a trained dancer since childhood, at the Children’s Palace in Ulaanbataar, Mongolia. After her graduation, she pursued a career as a professional dancer and won several contests, including ballroom dance.

Steven and Erdenetuya Seagal met in 2002 when she was working as his interpreter during his visit to Mongolia. She later became his assistant for five years before they got married in 2009.

If you are wondering about Erdenetuya Seagal’s kids with the actor, they have a son together named Kunzang Seagal. He was born on September 17, 2009.

Nothing is more important than our family. We must cherish our children… they are our future.

The 44-year-old Arrested Development star and wife of Ellen DeGeneres, took to Twitter and claimed that Seagal sexually harassed her years ago.

#ArrestedDevelopment & #Scandal  actress #PortiaDeRossi has accused #StevenSeagal of sexual harassment. She claimed that he unzipped his pants during an audition. Swipe to read her account of the incident.

“My final audition for a Steven Segal movie took place in his office. He told me how important it was to have chemistry off-screen as he sat me down and unzipped his leather pants. I ran out and called my agent. Unfazed, she replied, ‘Well, I didn’t know if he was your type.’”

My final audition for a Steven Segal movie took place in his office. He told me how important it was to have chemistry off-screen as he sat me down and unzipped his leather pants. I️ ran out and called my agent. Unfazed, she replied, “well, I didn’t know if he was your type.”

The 44-year-old Scandal guest star wasn’t the only one who made claims against Seagal. Julianna Margulies, whose best known for her starring role on The Good Wife, also remembered a time when she was alone with the actor but was supposed to meet him with a casting director.

Margulies continued, “I got to the hotel around 10:40, and she wasn’t there. And he was alone and he made sure that I saw his gun, which I had never seen a gun in real life.” She further added, “I got out of there unscathed…I never was raped, and I never was harmed. I don’t know how I got out of that hotel room.”

But the accusations don’t stop there. Actress-turned-journalist Lisa Guerrero, 53, has also accused the actor-producer of sexual harassment. Guerrero was 31 at the time, and Seagal was 43 when she agreed to audition for the female lead in Fire Down Below.

At #lax on a 3hr delay this morning on my way back east to shoot another round of @insideedition #investigations and I am #gearedup !!! #represent #gododgers #thisteam #worldseries #losdoyers ?

Guerrero said, “I’ve actually been telling this story dozens of times over the years. I’ve told friends, colleagues — I’ve warned young actresses in acting classes and projects I’ve worked on. I said, “Don’t go to Steven Seagal’s home alone. This is what happened to me.” But the Weinstein story, specifically the part about him answering the door in his robe, that triggered my memory and brought up those images again of what happened with Steven Seagal. It triggered my revulsion at what it feels like to be an actress and having a powerful star and executive producer answer his door in a robe.”

“There’s not a human resources person to go to when you’re working on a film. Especially not when the film is produced by the person being inappropriate to you. He’s 100 percent the boss,” added Guerrero.

At this point, many of Hollywood’s male stars have been named, no matter how big or small they rank in the industry. It’s been known to be a toxic environment for women, and there are even stories of female casting directors and assistants going along with inappropriate demands.