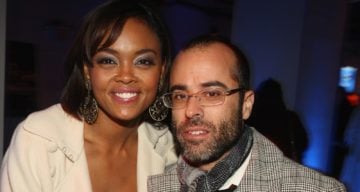 Actress Sharon Leal and producer Steve Greener attend the after party for the world premiere of "Soul Men" at The Hip Hop Cultural Center on October 28, 2008 in New York City. (Photo by Stephen Lovekin/Getty Images for The Weinstein Company)

Congratulations are in order for Tamron Hall and Steven Greener. The former NBC veteran anchor has welcomed her first child with her husband, Steven Greener. While Hall is a prominent media personality, her husband’s presence in the media is more understated. Nonetheless, we’re celebrating the new father, right here in Steven Greener’s wiki.

Steven Greener Is a Music Executive

#Stevengreener The bosses I truly admire or even affiliate myself with, may not have a personal Instagram with A billion/gazillion followers, likes or even a Instagram at all…but they are some of the most powerful movers and shakers in music and entertainment Business!!! These are the ones I study the ones I model myself after…Miss Me W/that fame shit!!! Unless you're using it to help motivate the people who support you instead of losing sight of what really matters in life…then it's all bullshit💯#levels #bossbehavior #qualityoflife 💯 #nosquaresinmycircle #innercircle #berniemac #tank #etheridge #seniorpartner #tbt @primarywave

Before his association with Hall, Greener made headlines in 2017 when he was appointed as the head of the music talent management division at Primary Wave Entertainment. The agency where Greener is also partner is home to artists like Cee Lo Green, Yanni, and Eric Benet, among others.

Greener graduated from the State University of New York College at Oneonta in 1989. Interestingly, he began his career in the music business as one of the people managing Will Smith.

Steven Greener currently resides in New York where Tamron Hall’s work is based. In both L.A. and New York, Greener had one foot in the music business and the other in the film industry.

He’s a film and music producer associated with Benchmark and 5 Boroughs Entertainment.

Managers: Building a star with @jamescruz1 @askfly @mathewknowles #stevengreener and #jamesLindsay "international business is important when managing a business… the least stream of revenues is through record sales."

Among his early production credits are Above the Rim for New Line Cinema and New Jack City for Elephant Walk Entertainment. He also produced Soul Men starring Samuel L. Jackson and Bernie Mac.

In 1997, he launched Union Entertainment, which was later acquired by 3 Arts Entertainment in 2002. He later served as a consultant and VP of Lionsgate’s Codeblack Films.

He also developed The Bernie Mac Show with Union Entertainment. Greener said that when they first met Mac, the comedian was making $25,000 on the road with his standup routine. By the time the eponymous comedy show was at its peak, Mac was famous enough to earn $350,000 a night doing shows.

Tamron Hall is usually very private about her personal life. Back when we were still reeling over her sudden departure from NBC and MSNBC, we didn’t even know she was in a relationship.

I’ve wanted to share this news for many months and now finally my doctor has said I am in a safe place, at 32 weeks, to share my joy with y'all. So, it’s clear a daytime talk show isn’t the only thing I’ve been trying to produce! There have been many tears, but today I embrace the smiles. My husband Steven and I are beyond excited! We're in constant prayer, so if you pray, add us to your list; if you meditate, send calmness our way; and if you believe in luck, we’ll happily take that too. More to share in a few weeks when the baby arrives! Next chapter! Blessed and Grateful.

However, in March 2019, Hall revealed that she was married to a man named Steven and expecting their first child. “Steven” was initially a mystery guy, but it was later revealed that her husband is Steven Greener.

Hall congratulated Greener on his new role at Primary Wave in 2017. Back then, she referred to him as a “friend.” They probably tied the knot sometime after that.

Greener and Hall Are New Parents

Along with her secret marriage, Hall announced she was 32 weeks pregnant in March. On April 25, 2019, she announced she had given birth to their first child, a boy they named Moses.

Moses & Mama!! I can’t wait to introduce y’all to my #sonshine. Photo credit: Dad who can’t stop crying tears of joy. Thank y’all for the love and support. It got us here.