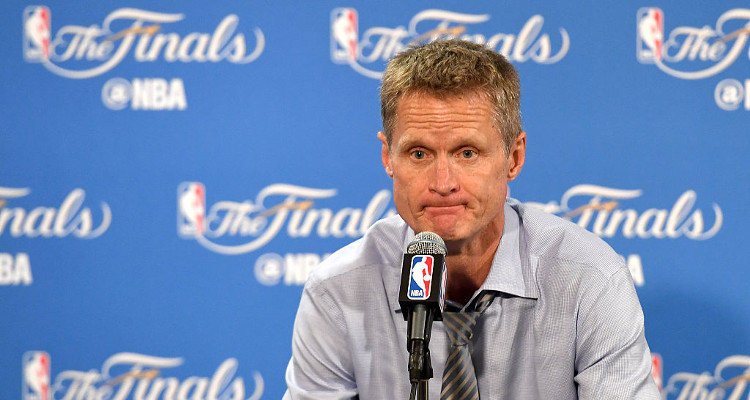 Former professional basketball player and current head coach of the Golden State Warriors, Steve Kerr has been married to Margot Kerr for over 25 years. Here is everything you need to know about Steve Kerr’s wife in our Margot Kerr wiki!

After being away for six weeks, Golden State Warriors head coach, Steve Kerr came back with a bang at Oracle Arena on Sunday for Game 2 of the NBA Finals. The crowd gave him a standing ovation as he walked in before the game started.

Kerr was on leave to treat his chronic back pain, due to complications from surgery in 2015. He was reportedly out indefinitely, but managed to recover just in time to watch the Warriors dominate over the Cavaliers in Game 2! About his return, Kerr said, “I wanted to string together a few good days, I did that.”

The decision to be at the game was announced just two hours before the game started. During the head coach’s absence, the team’s assistant coach, Mike Brown, took over as acting head coach. Kerr was impressed with Brown, saying, “He’s such a good coach and a good person. And the way he’s handled this whole thing is incredible —just the humility and yet the confidence with which he took the reins. Players appreciate him; the staff does; I certainly do. He’s an amazing guy, and we’re lucky to have him.”

Margot Kerr’s age is 51 and she was born and raised in Arizona. In 1983, Margot graduated from Salpointe Catholic High School. She met her husband in 1985, when they were both sophomores at the University of Arizona. They were set up on a blind date by Bruce Fraser, who is now an assistant coach for the Golden State Warriors —the team that Kerr coaches.

Talking about her blind date, Margot admitted that Fraser likely “thought, ‘These two are nerdy, they’ll get along.’”

Margot and Steve dated for a long period of time and it seemed nothing could tear them apart. They were even forced to have a long distance relationship for over a year, as she worked in Los Angeles and he was finishing school in Arizona. She eventually quit her job to move in with her Kerr in Phoenix. However, they quickly changed their plans and moved to Ohio after he was traded to Cleveland.

Steve and Margot Kerr walked down the aisle in 1990. The couple have three children together: Nick Kerr, Maddy Kerr and Matthew Kerr. Nick plays Division I basketball at the University of San Diego, where he recently graduated from with a degree in business administration. Maddy played volleyball for Berkeley and their youngest son, Matthew, graduated from high school in 2016.