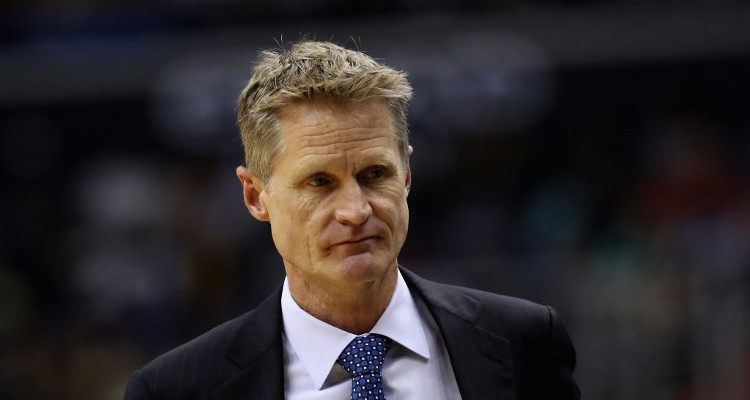 People were wondering what was keeping Steve Kerr, head coach of the Golden State Warriors, away for the last six weeks. It was due to chronic back pain stemming from surgery that he had two years ago. On Sunday, June 4, Kerr returned to the bench and guided his team to a victory against the Cleveland Cavaliers.

He’s back! Steve Kerr, head coach of the Golden State Warriors, has returned after being absent for six weeks. He made it just in time for Game 2 of the NBA Finals at the Oracle Arena on Sunday, June 4. When he waked across the court a few minutes before the game started, the crowd stood up and roared. What was wrong with Steve Kerr? Why was Steve Kerr out? We will tell you all about Steve Kerr’s health and recovery, right here.

Absence Due to Chronic Back Pain

BREAKING: #SteveKerr will coach in Game 2 of the NBA Finals for the #Warriors (h/t ESPN) #BALLGOD

What happened to Steve Kerr? The Warriors head coach was on indefinite leave as he was undergoing treatment for chronic pain, which he said stemmed from back surgery. Thankfully, he recovered before the Warriors played against the Cleveland Cavaliers! Kerr now plans to return to his post for the remainder of the finals saying, “I wanted to string together a few good days. I did that,” he said. Kerr’s presence certainly motivated his team because they won with a score of 132-113.

Kerr was dressed in team sweats and sounded positive as he announced his return in a news conference just two hours before the game started. He said that even though he did not yet get a chance to let his players know, he was quite sure that they already knew, “Because they are all on their phones all the time.” Kerr stepped away from his duties in late April because he was having pain and headaches due to complications arising from back surgery in 2015. On May 5, 2017, Kerr underwent a procedure at Duke University to repair a spinal fluid leak. He was not well enough to coach from the bench, but still worked with the team at practice and in the locker room.

Waiting for the Coach

In Kerr’s absence, assistant Mike Brown became the Warriors’ acting head coach. According to Kerr, Brown did a fine job in his absence. The team continued its winning streak and won each of their 11 games. Brown humbly said that he was merely a placeholder until Kerr returned. Cleveland Cavaliers’ coach, Tyronn Lue was texting Kerr throughout his six-week absense. Lue said “Steve Kerr’s a guy I respected even before he started coaching. So it’s good to have him back over there.”

Back in the Saddle

Welcome back Coach Kerr! Cheers to your health! Welcome to the 2017 Finals! Onto Cleveland. Go Warriors!

Steve Kerr has a great record with the Warriors, as he’s guided them to the NBA finals in the three seasons he spent as their head coach. He had to miss half of last season due to his back surgery and a follow-up procedure. Kerr’s illness and absence showed how vital he was to the team’s success. When asked what he plans to do with his return, Kerr said, “Nothing really changes for our players. We’re doing the same stuff, and the strategy remains the same. We’ll keep it rolling, and hopefully, we’ll keep playing well.” Welcome back, coach!