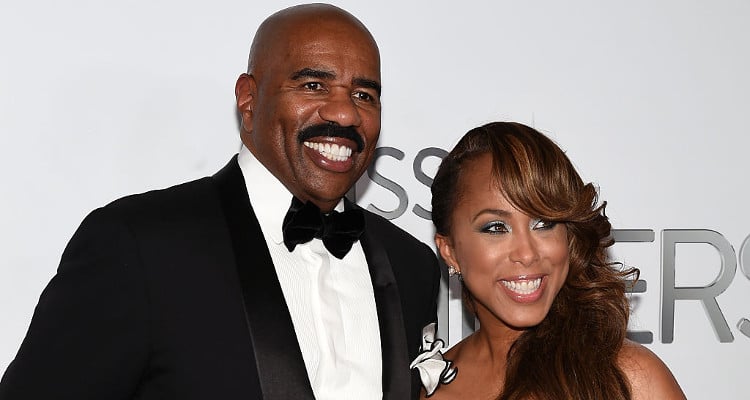 Steve Harvey and his wife, Marjorie Harvey, celebrated 10 years of marital bliss in 2018 and their chemistry is beautiful. Yet there are divorce rumors floating around. But fret no further! Marjorie Harvey continues to show us that she and her husband are still in love through Instagram. If you don’t know much about Steve Harvey’s wife and brood, catch up on their large and blended family right here, in Marjorie Harvey’s wiki.

Marjorie Harvey’s Ex Is Publishing a Book on Her

Marjorie Bridges was born on October 10, 1964. Before they married each other, Steve Harvey and Marjorie were in different relationships.

Marjorie was married to Jim Townsend, reportedly a drug kingpin. According to reports, federal authorities were investigating Marjorie in the ‘90s for her alleged involvement in Townsend’s drug ring.

Townsend was sentenced to life for attempting to buy cocaine. He was released in 2017 after spending 26 years in prison. Marjorie was never charged and divorced him five years into his sentence.

Townsend now claims he’s writing a memoir covering their marriage and other activities they engaged in. “I wrote two-thirds of the book in prison,” said Marjorie’s ex, further adding that he had reservations about publishing it because of his children. But he decided to go ahead with it irrespective of Marjorie and Steve’s wishes.

A release date for Townsend’s memoir has not been confirmed.

Steve Harvey was married twice before. He has twin daughters, Brandi and Karli, 36, and a son, Broderick, 28, from his first marriage to Marcia Harvey. From his second marriage to Mary Lee Shackelford, he has a son, Wynton, 21.

Steve and Marjorie don’t have children together; however, Steve is stepfather to Marjorie’s three children—Morgan, Jason, and Lori—from her previous marriage, while Marjorie is stepmother to Steve’s children.

The couple also has five grandchildren. The birth of their then-youngest granddaughter, Rose, in 2015 prompted a special celebration for Mother’s Day, since Marjorie’s daughter Morgan was a first-time mom.

“As long as I’m able to speak with my mother, each one of our children and grandchildren on Mother’s Day, I will always be happy,” Marjorie said.

Since then, their brood has grown to include a new granddaughter, Elle, and grandson, Ezra.

Steve’s Bodyguard Brought Them Together

Steve Harvey’s first two marriages were difficult. The first one ended when he wanted to focus on his career. But he was also broke and living out of his car.

The second, he claimed, was not right from the beginning because he got married just to be with someone. His marriage to Mary met a bitter end, with her filing a lawsuit against him and an ugly court battle.

While he was a struggling entertainer, he began dating his longtime friend, Marjorie, before they went their separate ways. But his bodyguard knew that Marjorie was the only woman for him.

“He told me, ‘Look, the only time I’ve ever seen you happy was when you were with that woman Marjorie. Now before you go and do something stupid and marry another woman, I’m calling her,’” Steve recalled. With encouragement from his bodyguard, he called his ex Marjorie. They picked up where they left off and married in 2007.

Over the past decade, Steve Harvey’s famous date on the red carpet has been his wife, and she’s always a sight to behold. In fact, she always looks fabulous, even while walking on the street.

Marjorie Harvey has an impeccable style that she imparts on her blog, The Lady Loves Couture. Her status in the fashion world has found her on the front row seats of fashion shows everywhere from New York to Paris. Her blog’s not just about fashion; it encompasses travel, lifestyle, skincare, and food. However, it doesn’t appear to have been updated for several months.

Her fame has earned her over 2 million followers on Instagram! She has expanded her fashion venture by starting an online luxury fashion consignment store, and a line of handbags. Her daughters have also followed in her footsteps with blogs of their own, as Morgan has a food blog, I Need Some Mo.

Thank you my love for stepping outside of your comfort zone to do what is right for others…. Even in the face of adversity! Doing the right thing sometimes isn't popular….. but it's ok…… You always make me proud! I love you ❤️😍😘🙏🏼 #bless #empathy #proudwife #goodvibes

Marjorie Harvey knows to make a point through social media. She may not be very direct, but her message is clear.

Remember when Steve Harvey paid a visit to his old friend, President Donald Trump? He was there to discuss Trump’s plans for inner cities, which is a good thing no matter how contentious the POTUS is. However, the backlash on social media was instantaneous and obvious.

Nevertheless, Marjorie Harvey thanked her husband for doing the right thing even “in the face of adversity!” However, she didn’t let him go to Trump’s inauguration because she insisted he celebrate his 60th birthday on January 17 with the family.

Marjorie also shared words of encouragement for Steve when he returned to Miss Universe after the infamous name blunder in 2015. And if you needed more proof of how perfect their marriage is, this couple can also joke about Marjorie leaving Steve for the pool boy on Celebrity Family Feud.

In 2019, the couple has been dogged by rumors of trouble in paradise and divorce. But sources close to them have denied they are heading for splitsville. Besides, Marjorie’s latest posts on Instagram show she and Steve are still going strong.

You are a Stand Up Man and A True Class Act the way you went back out on the stage on live TV and took full responsibility alone. I am so proud to be your wife! I love you 😍😘🙏