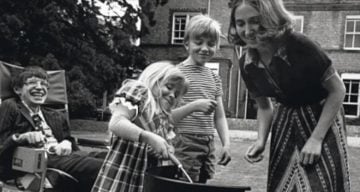 Brilliant theoretical physicist Stephen Hawking passed away in the early hours of March 14, 2018, at the age of 76. He will be remembered for generations to come, and his life’s work for longer. Stephen Hawking’s death was reported by his family, and he is survived by his three children, grandchildren, and his ex-wives, Jane Hawking and Elaine Mason.

The news of the physicist’s death was confirmed by his family. And we’re sure Stephen Hawking’s children are the most devastated and mourning his loss.

The Einstein of the ‘70s lived an eventful life without as much as batting an eyelash about his disability. And the children of Stephen Hawking all have different memories of him, and if you want to know who they are, then keep reading.

Stephen Hawking and Jane Hawking (née Wilde) met each other through his sister. Both went to the University of Cambridge and fell in love sooner than anyone could say physics.

At the time of their marriage in 1965, Stephen Hawking was already diagnosed with amyotrophic lateral sclerosis (ALS), and his health was deteriorating rapidly. He was already in need of help for many of his physical requirements and needed aid to walk.

The doctors had given Hawking two or three years to live, and Jane Hawking was in love with him. She wanted to give him every opportunity at life.

In an interview, Hawking spoke about her married life and when asked about the sacrifices she had to make for her husband, she said, “It was really after fame and fortune took hold, that I began to find things very difficult.”

Hawking said that eventually she became worn out, after having to deal with a lot of things that she may not have signed on for.

Robert Hawking was born in May 1967. He is the oldest of the three children and the first to take care of his father, whose health was ever failing.

Jane Hawking spoke about how their eldest child was very helpful and wouldn’t at all mind tending to his father.

“Our gorgeous child, who was so willing to help, was having to do things for his father that children really shouldn’t have to do,” explained Hawking and added that she also started depending on him as she was exhausted from her routine.

When Robert Hawking grew up, instead of taking up physics like his father did, he chose software engineering. He works for Microsoft, one of the most famous software companies in the world.

Robert Hawking is married and has kids, who he loves a lot. But the bond that he shared with his father was very special.

Lucy Hawking was the second child to come along. She was born on November 2, 1970.

Like her older brother, Hawking also grew up tending to her father. Eventually, she played a key role in being her father’s caregiver.

As a child, Lucy Hawking lived in California for a few years but later returned to Cambridge and studied at the University of Oxford. Following in her mother’s footsteps, she studied Russian and French, and she spent some time in Moscow before talking up journalism at the University of London.

Today, Hawking is a novelist and children’s book writer. She is also a speaker and science educator, and we’re sure she owes it all to her late father, Stephen Hawking.

According to her website, lucyhawking.com, she is the one who created the George Greenby books.

Hawking visits several colleges and institutes and wants to make the world a better place.

Lucy Hawking was married to Alex Mackenzie Smith, who worked in Bosnia as a civil servant from 1998 to 2004. The couple has a son named William Smith together, and he reportedly suffers from autism.

Also Read: How Intelligent Was Stephen Hawking? What Was His IQ?

The youngest child of physicist Stephen Hawking is Timothy Hawking. He saw a whole different side of the family than the rest of his siblings.

Timothy Hawking was born in 1979, and it was around the time his father had lost his voice. He and his father never had the chance to properly communicate until he was five.

“It was only when he got his voice synthesiser that I was actually able to start having conversations with him. It was somewhat ironic that Dad losing his voice was actually the start of us being able to form a relationship [sic],” Hawking said.

Timothy Hawking was more free and mischievous with his father. He would even feed in swear words into his father’s voice box.

As a kid, Hawking would jump into his father’s wheelchair and play around, and he shared a very strong bond with him. They would often watch their favorite TV shows together and play chess, too.

“My father is hugely competitive and he certainly wasn’t the easiest opponent at any game, particularly chess,” said Hawking.

Timothy Hawking went to the University of Birmingham to pursue his Master of Science in Marketing.

The youngest son of the world-famous physicist is a marketing manager and a brand developer for The LEGO Group and lives in London.