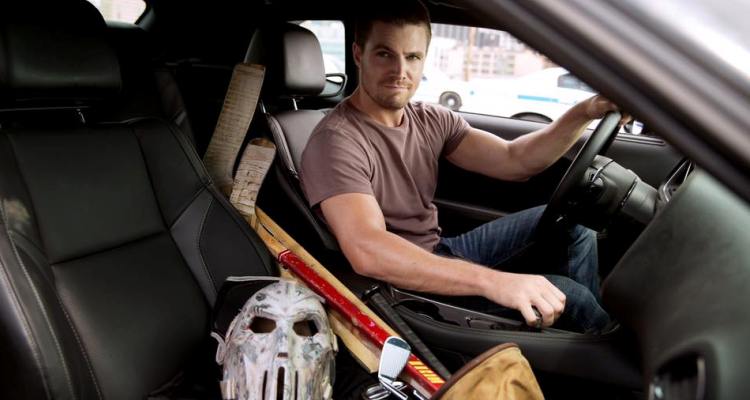 It’s hard to see Stephen Amell play anyone other than Green Arrow these days, but the Arrow star will be trading his bow for a hockey stick as he plays New York City vigilante, Casey Jones in TMNT 2: Out of the Shadows. After watching the 34-year-old in signature rollerblades, fighting crime and dawning a Friday the 13-esque hockey mask in the new TMNT movie trailer, we can only assume that this movie will be awesome!

The Arrow star will soon be gearing up to fight crime Casey Jones-style alongside the Turtles and possibly exchange glances with his love interest, reporter April O’Neil. Looking back at his amazing action sequences in Arrow, there is no one better suited for this role, especially since Amell does most of his own stunts!

The movie’s producer, Michael Bay, posted a picture that confirmed Amell to portray the role as masked vigilante, Casey Jones. Something tells us that Amell had no problem preparing for this role—his chemistry with Megan Fox also got him the part—but the action helps.

5 Things You Need to Know about TMNT 2

Yes, we said it before and we needed to say it again because this is just great news! Amell being added to the roster changes the game for the movie and adds much need fun and banter between Amell and Fox’s characters. Amell will be sporting the classic hockey mask, hockey stick, and hoodie that Jones normally wore in the original movies and cartoons. Jones lost his parents to the gang the Purple Dragons and grew up on the streets of New York City.

The Movie Is Directed by David Green

Director David Green is no stranger to the superhero genre, having co-produced shows like Smallville and Heroes. Judging by the trailer, it seems that Green did a great job in bringing this story to life, filling it with action, fun, and nostalgia.

TMNT 2 will see the return of its main cast the turtles played by Noel Fisher, Alan Ritchson, Jeremy Howard, and Pete Ploszek. Fox will return as April, Will Arnett will reprise his role as Vernon Fenwick. Tyler Perry is set to play scientist Baxter Hockman, and we will get to meet villains Bepop (Gary Anthony Williams) and Rocksteady (Stephen Farrelly). Teenage Mutant Ninja Turtles alum, Judith Hoag, who played the first live-action April, was also cast in an unknown role as well as actress Laura Linney.

The plot is pretty simple: Some bad guys want to take over New York City, and the turtles have to stop them. Naturally there’s more to it but no one knows yet. In the trailer there was a dark breach in the sky with robots coming out—sound familiar?

The movie was filmed during summer 2015 on location in the city of the movie’s setting: New York City. It’s due to hit theaters on June 3, 2016. Check out the trailer below!