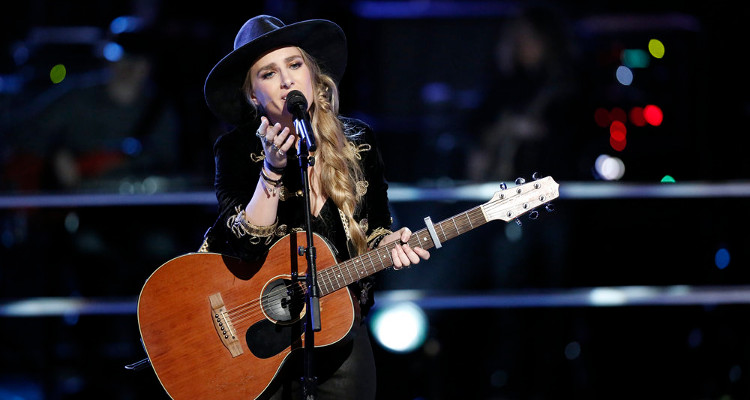 Stephanie Rice stepped up to The Voice stage and moved everyone with her talent and her heart-wrenching story. She was nearly out of the competition after the Knockout Rounds, but thanks to Coach Alicia, we won’t be saying goodbye to Rice just yet!

Houston, we almost had a problem! Texas native, Stephanie Rice lost the Knockout Round when Coach Gwen chose Troy Ramey as the winner. But Rice wasn’t going home, thanks to Alicia Keys who swooped in and stole her. She’s by far the most emotive artist this season, and we’re not ready to see her go just yet. Rice performed Taylor Swift’s “Safe and Sound” in the Knockout Rounds, describing her performance as “me singing to my 18-year-old self.”

When she sang at the Blind Auditions, she only got Gwen Stefani to turn her chair, but her story moved all the coaches and viewers of The Voice. The daughter of a pastor, the 27-year-old’s coming out story was heartbreaking, which ended with her parents disowning her. She has moved on and is now engaged to her supportive fiancée, championing LGBTQ rights, and performing as the vocalist, guitarist, and songwriter in the three-piece band, Colonial Blue. Rice is most famous on The Voice for channeling her hurt into her singing. Now, she’s heading to the Live Playoffs under the advisement of her new coach, Alicia Keys. To stay up to date with Stephanie Rice behind the scenes of The Voice, follow her on Instagram, Twitter, Facebook, and Snapchat accounts. We’ve got all you need to know on those, right here.

With over 8500 followers on Instagram, Rice is on her way to becoming an Instagram celebrity, and she can’t resist posting pictures of herself hanging out with her fellow competitors. She also posts about her band, and you can check out Colonial Blue’s Instagram page through her account. It’s worth following! Besides pictures from various photoshoots, she loves posting inspirational quotes, which reflect her passion for music and following her dream. Follow her on her Instagram username, “stephaniericemusic.”

"Music was my refuge. I could crawl into the space between the notes and curl my back to the loneliness." -Mary Angelou #musicheals ?:Jan

Team Alicia’s new artist has over 4800 followers on Twitter. Following her Twitter username, “@stephricemusic,” could help her surpass 5000 followers. This could come handy when she appeals for the “Live Twitter Save” later in the competition. If you follow her, you can get updates about her upcoming The Voice performances and her preparations for the show. And you can also see her beautiful photoshoots on Twitter.

'Safe and Sound' by @taylorswift13 & @thecivilwars fills my soul with peace. I want to share with you that same feeling. ?#VoiceKnockouts pic.twitter.com/JjXOaxISn3

If you check out Rice’s Facebook, you’ll see through her posts, she has turned into a local celebrity in Houston! She posts the same things on her Facebook, Instagram, and Twitter pages, but you can find some extra treats on Facebook like the FB Live she did before her Knockout performance aired.

The Houston native mentions her Snapchat username, “stephricemusic” in her Instagram bio. Add her on Snapchat and maybe you’ll get to see some behind-the-scenes scoop from her in real time!

The Voice season 12 airs every Monday and Tuesday. Don’t miss the Live Playoffs that begin next week at 8:00 p.m. EST on NBC.