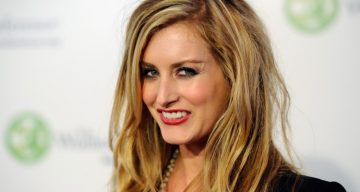 Rising country artist, Stephanie Quayle made her television debut on Fox & Friends Friday, December 16. Born and raised in Montana, the singer performed her single “Drinking with Dolly” and also “White Christmas,” the holiday classic. Here are some fun facts about the talented and rising country star!

She topped the CMT Music 12-Pack Countdown with her music video for “Drinking with Dolly,” which premiered last month. For her new album, Quayle has been working in the recording studio with producer, Matt McClure. She’s shared the stage with Chase Rice, LoCash, Granger Smith, Trace Adkins, Gary Allan and more, and is wrapping up an extensive radio visit and performance touring schedule. If you want to watch her new music video and learn interesting facts, including Stephanie Quayle’s age, keep reading our Stephanie Quayle wiki!

“Drinking with Dolly” is a song that is very close to her heart. The meaning behind the song is described on her website with the following: “It is an anthem for all the women of country in a time when female artists are rising together to make a major impact in today’s music scene.” Quayle, who is currently celebrating a top 100 single on the Billboard country airplay chart, told the story behind her inspiration for the single. “Last fall when my producer asked if he could play me a song, I felt a magic from the first words and chords,” she said. “That is where my love affair with this beautiful tribute to women in country music began. As a songwriter, I felt as if these were my own words and my own story. This song was a must.” Check out her music video below to hear the song in its entirety!

While people are searching for Stephanie Quayle’s net worth, the singer is still new to the mainstream country industry, so information about her net worth has not yet been made available.

Entry to the Country Music Industry

Quayle spent her youth working on a buffalo farm in Montana. She spent a lot of time mucking horse stalls while listening to the local AM radio. It was during this time that she was introduced to country music and her fascination with the genre inspired her. When she was only 12 years old, she wrote her first song and became a talented piano player. At 15, she bought an acoustic guitar at a pawnshop and taught herself how to write music to her poetry and personal journal entries. It was only a matter of time until the passionate aspiring musician broke into the music industry.

This is my serious face. I seriously love My Flocking Flock. 7 more days to vote us onto the stage of the iHeartRadio music festival in Vegas! Flock on! #VoteForQuayle #stephaniequayle #risingstar @iheartradio @macys @meridianboutique @etiennemarceldenim @lucchese Link to vote in bio!

Today, she has launched singles that have impacted radio and CMT, GAC and ZUUS country, and has travelled across the world performing alongside musicians like Jerrod Niemann, Lee Brice, Jamie O’Neal, and more. She also performed on stage at the Sundance Film Festival, Country Jam, NRA, and the CMA Music Festival. Quayle was named one of 2016’s Macy’s iHeartRadio rising star top five finalists!

Stephanie Quayle’s husband is North Carolina real estate developer, David Couch and the couple have been married since 2015. They were married on Saturday, June 20, 2015 at a private family ceremony in the musician’s home state of Montana.

Peeps how cool is this?! #TY @montanabridemag for the beautiful feature! Such an honor to be a part of an extraordinary magazine with my #unicorn! If you are in #MT pick one up! #montanabride #montana @katalingreen @augustajonesbridal @arnicaspring @lane.official @jouercosmetics @enzomilanopro @murdochs_ #SYTTD @sayyes_tlc @tlc #weddinginspiration #wedding

If you missed @sayyes_tlc last Friday… @tlc is re-airing the episode tonight at 7:30PM CT/8:30PM ET! And yes… I know it was risky to search for a dress just 13 days before my wedding day! @augustajonesbridal @arnicaspring @katalingreen @theknot #SYTTD @xlcountry @lanebootsofficial

Considering her last name, people are wondering if Stephanie Quayle is related to Dan Quayle. There is no information available that confirms she is related to the American politician.