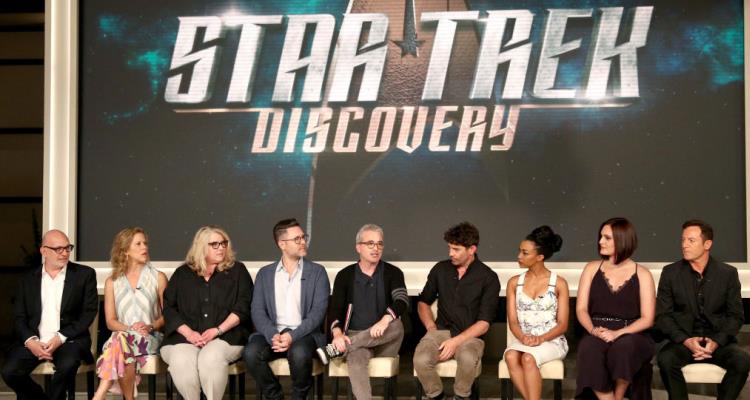 The Star Trek: Discovery premiere date begins this Sunday, September 24th at 8:30 p.m. EST. You can tune in to CBS to watch the first episode, however you may have to wait a bit longer as it follows 60 minutes and an NFL game. You can also stream the show live through CBS All Access, or subscribe to Space and CrraveTV if you’re watching from Canada. If you really enjoyed the first episode, you will need to subscribe to your respective streaming services to continue watching. It will be available right after the broadcast premiere, so if you are a subscriber, you will be able to enjoy all the new episodes as they air! The first season of Discovery will consist of 15 episodes, running from September 24th to February 18th, 2018. There will be a short break from November 7th until January 7th, 2018, over the holidays. The Star Trek: Discovery air date is just a few days away, so be sure to subscribe to CBS All Access if you’re a big fan! You can bet all the other “Trekkies” will be tuning in!

So far, the Internet has been going crazy in excitement over the series. The first two episodes debuted at the world premiere of the show in Los Angeles Tuesday evening. Attendees who were lucky enough to get a seat gave the episodes great reviews. The series stars The Walking Dead’s Sonequa Martin Green, Jason Isaacs, and Michelle Yeoh. The show will also introduce Chris Obi as T’Kuvma, the leader of an ancient Klingon house who strives to unite his people, even if it leads to war. He is joined by Kol, played by Kenneth Mitchell, who acts as his protege. Mary Chieffo will play L’Reill, T’Kuvma’s battle commander. Green plays Spock’s half-sister, Michael Burnham. In fact, audiences were in awe of her performance, wanting more even after the premiere ended!

My No.1 take on #StarTrekDiscovery after seeing the first two episodes tonight is: I can't believe we get 13 more episodes of this!!! pic.twitter.com/CIEXeMbCVg

Discovery is the sixth live-action Star Trek television series and the first to air in over 10 years! The story takes place before the events of the original Star Trek series, which made its debut in 1966. The original portrayed a vision of humanity’s future as it would look in the 23rd century. Many celebrities attended the premiere, including William Shatner, who played Captain James T. Kirk in the original series and Nichelle Nichols, who played Lt. Nyota Uhura. Members of the media also attended, as well as the stars and creators of the show, and they were greeted by a line of fans dressed in costumes of many of the Star Trek franchise’s characters. The characters included Trek aliens like Klingons, Andolians, and more.

If you’re a huge Star Trek fan, and want to watch the premiere, you’ll have to wait a few more days! But in the meantime, check out the official Star Trek: Discovery trailer for a sneak peek below! (If it doesn’t make you immediately want to turn into a Trekkie yourself, we don’t know what will!)