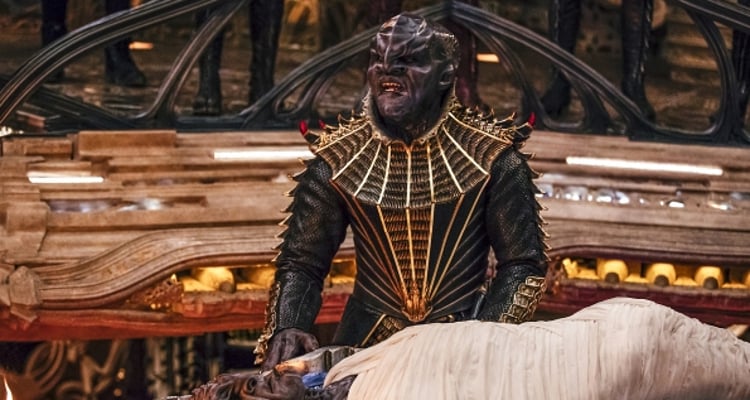 The new CBS show, Star Trek: Discovery, was met with great anticipation by viewers when it debuted on Sunday, September 24, 2017, and the Klingons’ new look has become a topic for debate. While some fans love it, others think that the new Klingons look stupid. Read on to find out why showrunners gave the Klingons a new look.

Though the Klingons started out as antagonists in the original Star Trek, they became close allies of the United Federation of Planets in Star Trek: The Next Generation. From the very beginning, the Klingons have become an indispensable part of the Star Trek universe, including the number of movies and TV shows that followed over the years. The premiere of Star Trek: Discovery aired last night, and one of the first things many people noticed is that the Klingons look very different than in previous installments of the franchise. So, why do Klingons look so different in Star Trek: Discovery? We have all the answers you need right here!

Reason for the Change

The explanation as to why the Klingons look different was given by showrunner Aaron Harberts, who says that the changes happened under the direction of former showrunnner Bryan Fuller, who wanted to update their look, “In the different versions of Star Trek, the Klingons have never been completely consistent. We will introduce several different houses with different styles. Hopefully, fans will become more invested in the characters than worried about the redesign.”

In 1967, the Klingons were depicted as an alien warrior race with bronze skin, facial hair and dramatic eyebrows. Their look was hugely altered in the 1978 Star Trek: The Motion Picture, where they were given ridged foreheads and sharp teeth, which has since become their signature look in the franchise.

Since then, the Klingons’ look has been changed regularly, including 2013’s Star Trek Into Darkness and, of course, now in Star Trek: Discovery. The new Klingons have bumps, spines, and ridges all over their faces and look completely different from the humanoids shown in previous movies and TV shows. Harberts mentioned that there will be different Klingon houses in Star Trek: Discovery, each with their own unique style. So there is a good chance that the Klingons who appear later in the series might have a completely different look than the ones we saw in the premiere.

Some people who watched the first episode have complained that the Star Trek: Discovery Klingons look stupid, but we think that this is a hasty judgment. It took time for people to get used to seeing Klingons with ridged heads and sharp teeth, so it is only fair to give their new look a chance before taking a stand against the change. The new look was decided on after a lot of thought, as a way to make them scarier and more intimidating as an alien warrior race. Whether or not you are a fan of the new Klingons, Star Trek: Discovery is bound to have great characters and a captivating storyline and is definitely worth watching. Star Trek: Discovery airs Sunday nights at 8:30 p.m. EST on CBS.