Synn, better known as Jim Cornette’s wife, is one person being accused in social media’s #SpeakingOut movement. Both Cornette and his wife have been accused of predatory behavior, including allegedly grooming and threatening victims. Synn, aka Stacey Cornette, is alleged to have demanded sexual favors from young wrestlers using her husband’s influence in the wrestling world. While Jim has gotten himself in trouble many times, the attention is on his wife now. This Stacey Cornette wiki reveals more on the allegations against her and her husband.

Synn and Jim Cornette Married in 2007

Born Stacey Marie Goff on August 29, 1974, to Janette Waite and Robert Goff, she and her sister Brenda are natives of California. Their father passed away in 2019.

Stacey Goff was a manager in Jim Cornette’s Ohio Valley Wrestling (OVW) promotion under the ring name “Synn.” She was the manager of Batista (a.k.a. Dave Bautista), who went on to become a World Wrestling Entertainment (WWE) Champion.

Don’t Miss: Who Is the Rock’s Wife, Lauren Hashian?

Ahead of their Halloween wedding, they sent out wedding invitations that looked like old-school wrestling posters. Along with the National Wrestling Alliance (NWA) logo and “World Martial Champions” on them, the invitations featured the couple’s photos as if they were set to face off in the ring.

Jim Cornette is no stranger to controversy thanks to his unfiltered speech and physical altercations. The latest controversy he and his wife are involved in though is the most serious one yet.

In the ongoing #SpeakingOut movement on social media, an indie wrestler named Phil Earley came forward with allegations of predatory behavior by the Cornettes. The accuser alleged that Stacey and Jim got in touch with a victim through DMs and sent him “lewd” pictures.

Earley tweeted all of this under the handle AKI Evolution.

The lengthy thread also has screenshots of the alleged texts sent by Stacy to the victims. The pictures seemingly corroborate Earley’s account of the alleged predatory behavior.

The independent wrestler said his experience with the Cornettes was “tame” compared to what others allegedly went through. He alleges that he received explicit pictures from Synn and that she demanded sexual acts from him.

Earley also alleged that if any young wrestler wanted to work with Cornette’s OVW promotion, he would have to perform sexual acts on the man’s wife with Jim as the audience. Earley’s unnamed friend also allegedly went through the same experience. When he removed himself from the situation, Stacey allegedly attempted “to terrorize” him into silence.

Earley also alleged that Stacey would brag about sending other wrestlers to physically attack the one who “escaped.” She also threatened their careers. 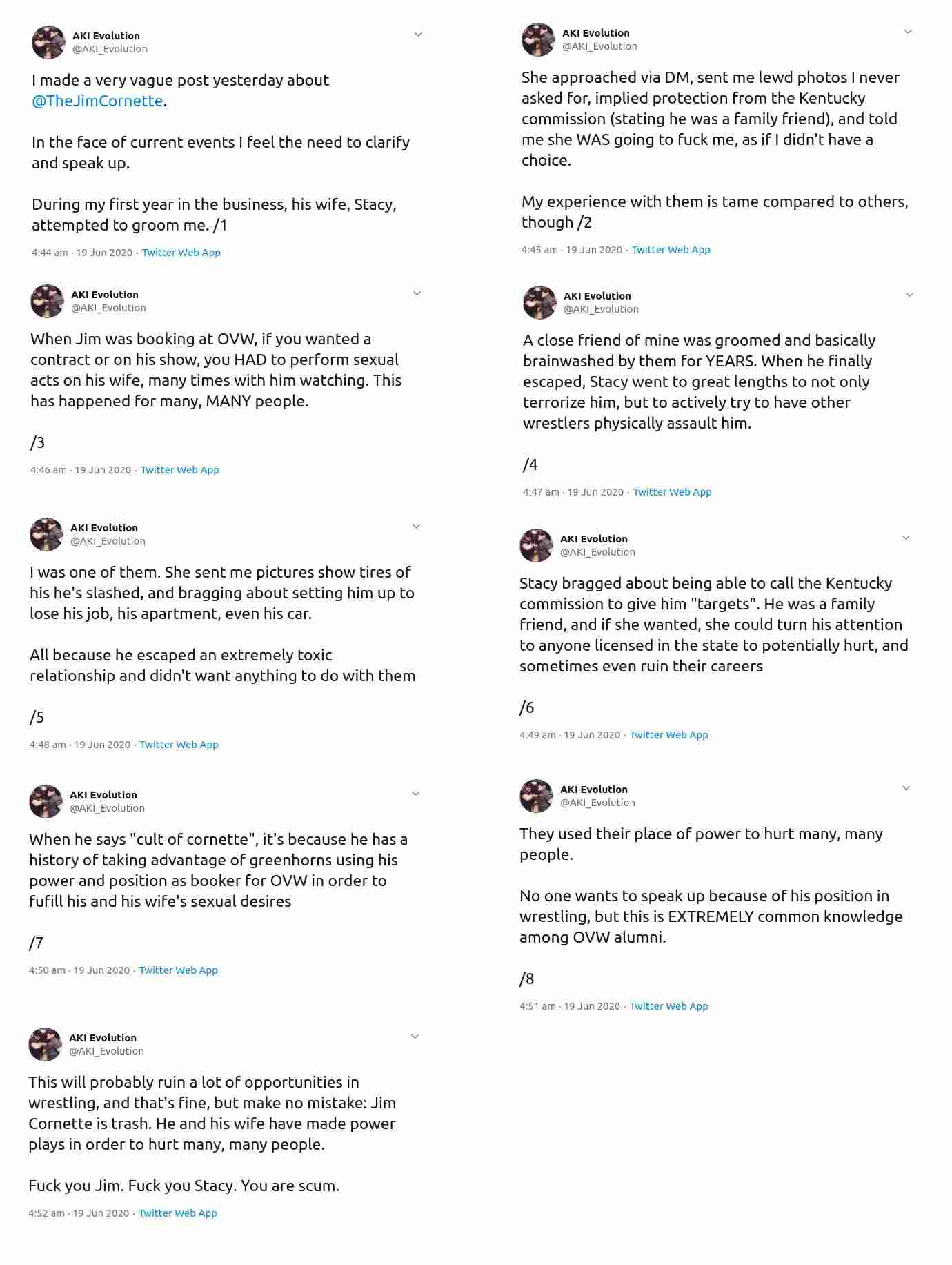 As of this writing, Stacey Cornette and Jim Cornette haven’t officially responded to the accusations. However, Synn discreetly purged all her social media accounts off the Internet.