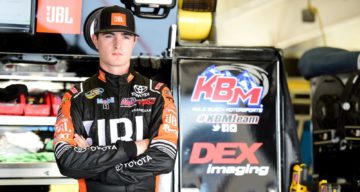 NASCAR pro Spencer Davis’ career and accomplishments are deserving of the attention they receive. Nonetheless, his personal life is also a subject of interest for his growing legion of fans. Davis is rather low-key about his family and relationships. Fans often wonder about the identities of those in his corner, and specifically if his parents and girlfriend are present. The racer’s loved ones certainly don’t need to make their presence known to cheer for him, and instead give us a glimpse into Spencer’s life off the race track through their social media. We reveal details about Spencer Davis’ parents and girlfriend through that.

Spencer Davis was born on November 29, 1998, and hails from Dawsonville, Georgia. His parents, Scott Davis and Cynthia Davis, are based in Dahlonega.

Spencer’s dad Scott is the owner and president of Davis Poultry Equipment in Dahlonega. He is also the one who got Spencer into motorsports.

Spencer recalled that he had wanted to race professionally since he was five years old thanks to his father. “My father [Scott Davis] was my inspiration for it and I had gotten started when I was 5 in Go-Karts,” he said.


Spencer, who was homeschooled, had his parents’ support in his racing dreams. Scott and Cynthia’s respective social media profiles showcase how proud they are of their son’s career.

According to Spencer Davis’ Facebook page, the stock car racer has been in a relationship with one Hanna Feith since August 10, 2019. The North Carolina native is a model and entrepreneur.

She is a graduate of Strayer University and the owner and CEO of a couple of boutiques. She previously modeled on runways and in pictorials.