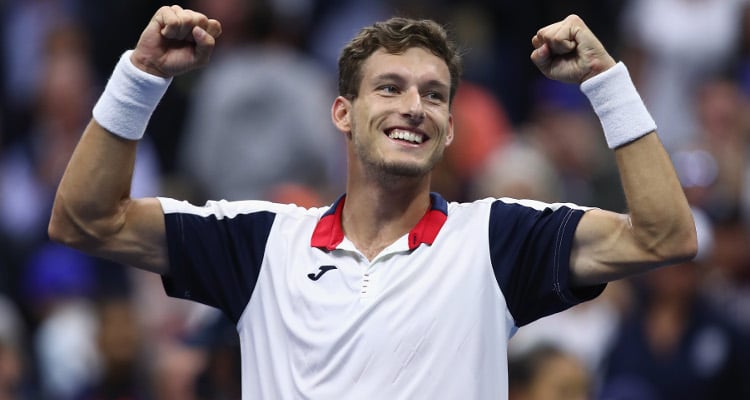 Pablo Carreno Busta is enjoying a dream run at the 2017 U.S. Open. He’s heading to the first Grand Slam semifinal of his career and might even win the U.S. Open!

When we think of Spanish tennis players, Pablo Carreno Busta isn’t the first player to come to mind. But after the 2017 U.S. Open, he might establish himself as one of the best players in the sport! If he defeats No. 32, Kevin Anderson, he could find himself in the finals and possibly up against fellow Spaniard, Rafael Nadal. Find out more about this rising tennis star in Pablo Carreno Busta’s wiki.

Busta was born in the city of Gijon in Spain, though he now lives in Barcelona. He is the only son of three children born to Alfonso, an architect, and Maria Antonia, a doctor. His parents and his sisters, Lucia and Alicia, keep out of the public eye though we’re sure they cheer for Pablo during his matches.

Growing up, he idolized another Spanish tennis player, Juan Carlos Ferrero. The Spaniard first picked up a racket when he was six years old. He went on to compete in the Juniors and at his peak, was ranked No.6 in the combined junior world rankings in 2009. Two years later, he made his pro-tour debut.

The 26-year-old has won three career titles and is ranked 19th as of September 2017, surpassing his current favorite player, 25th seed, David Ferrer. He was voted ATP’s Most Improved Player of the Year in 2013, when he won 42 out of 43 matches in the ITF. 2013 was when Busta gained more mainstream attention.

That year, he made his Grand Slam tournament debut in the French Open where he fell to Roger Federer in three straight sets of the opening match. He also had a stunning run at the Grad Prix Hassan II.

2013 was also when he enjoyed remarkable financial success. Forbes estimates he earned over $182,000 that year which is a big feat for tennis players who aren’t in top tier ranks. Traveling with an entire entourage can cost even high-earning players $100,000. But Busta owes his financial success to sponsors who are willing to invest in potential star players in a tennis-crazy country.

He Wants to Step out of Nadal’s Shadow

It’s easy to ignore other Spanish tennis players when No. 1 seed, Rafael Nadal, represents the country in the sport. Busta, though a promising star in tennis, has also been in Nadal’s shadow for most of his career. He finds it advantageous with Nadal in the limelight because it takes the pressure off of him. But he’s striving to be a household name in Spain through tennis.

The tennis players have a friendly rivalry and Busta is glad that the superstar takes the brunt of the expectations. There are both up and downsides to being another Spaniard tennis player when Rafael Nadal is still in the game, “So maybe it’s just easier when, in your country, Rafa has all the attention and you are very without this pressure, no?”

“But there are a lot of Spanish players, good Spanish players,” said Busta about his run in the U.S. Open. “And now I am in semifinals of the Grand Slam of U.S. Open, and I think is as important as if Rafa arrive to semifinals, no?” For what it’s worth, we think Busta’s Grand Slam breakthrough will get him out of Nadal’s shadow. After all, he once defeated 39 opponents in record 77 days. That’s a lot more than Nadal’s two 22-match runs!

Nadal and Busta are in the U.S. Open semifinals, Busta’s maiden Grand Slam semifinals. If Nadal beats Juan Martin Del Potro and if Busta doesn’t fall to Kevin Anderson, the U.S. Open finals will be an all-Spanish match.