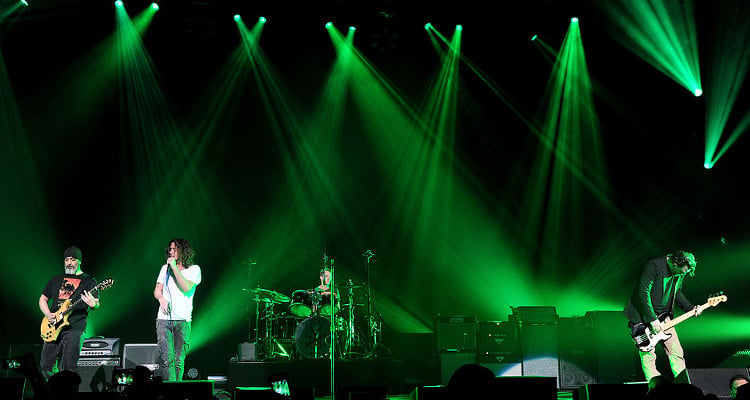 Soundgarden was formed in Seattle, Washington by three former members of the cover band The Shemps. They chose the name “Soundgarden” after a wind-channeling pipe sculpture called A Sound Garden in Magnuson Park.

The band’s first recordings were with C/Z Records. They only recorded three songs on a compilation album named Deep Six. In 1986, Sundquist left the band, and Matt Cameron filled in for him as Soundgarden’s permanent drummer.

By 1988, Soundgarden received a lot of recognition, and major labels were lining up to sign the band. However, they decided to sign with a small independent label called SST Records for their debut album, Ultramega OK. And with their first album, Soundgarden went on to receive a Grammy nomination for Best Metal Performance in 1990.

The band’s music video for their single, “Flower” was their first and was frequently aired on MTV’s 120 Minutes. Soundgarden’s 1989 European tour promoting Ultramega OK was their first overseas tour.

After the success of Ultramega OK, Soundgarden released Louder Than Love with major label, A&M Records in 1988. Because they signed with a mainstream label, the band lost a lot of fans who felt that they had sold out. The album was the band’s first to chart on the Billboard 200. It ranked #108 in 1990.

Following Louder Than Love, Soundgarden released Badmotorfinger in 1991. It received moderate success as Nirvana’s Nevermind was released at the same time and was a huge success. In addition to that, Badmotorfinger’s first single “Jesus Christ Pose” gained negative attention, as listeners regarded it as anti-Christian. Despite related controversies, Badmotorfinger was nominated for a Grammy Award for Best Metal Performance in 1992.

In 1994, Soundgarden released Superunknown, which was the band’s most successful album. It debuted at #1 on the Billboard charts and yielded the Grammy Award-winning singles “Black Hole Sun” and “Spoonman.”

Reviewer J.D. Considine of Rolling Stone said Superunknown “demonstrates far greater range than many bands manage in an entire career.” He added that, “At its best, Superunknown offers a more harrowing depiction of alienation and despair than anything on In Utero.”

This was the band’s last studio album in over 15 years. Soundgarden experimented with different sounds. The songs deviated from their usual style —the sound was less heavy metal and grunge, and included more instruments. According to David Browne from Entertainment Weekly, “Few bands since Led Zeppelin have so crisply mixed instruments both acoustic and electric.”

Soundgarden had a remarkable run and experienced crazy amounts of success. However, as their popularity increased, so did the tension among the band members. There were creative clashes and ego friction. Lead singer, Chris Cornell also blamed the stress on touring as it became tedious and repetitive.

On April 9, 1997, Soundgarden announced their split. However, 12 years later, the band reunited on January 1, 2010. Chris Cornell tweeted, “The 12-year break is over and school is back in session. Sign up now. Knights of the Soundtable ride again!”