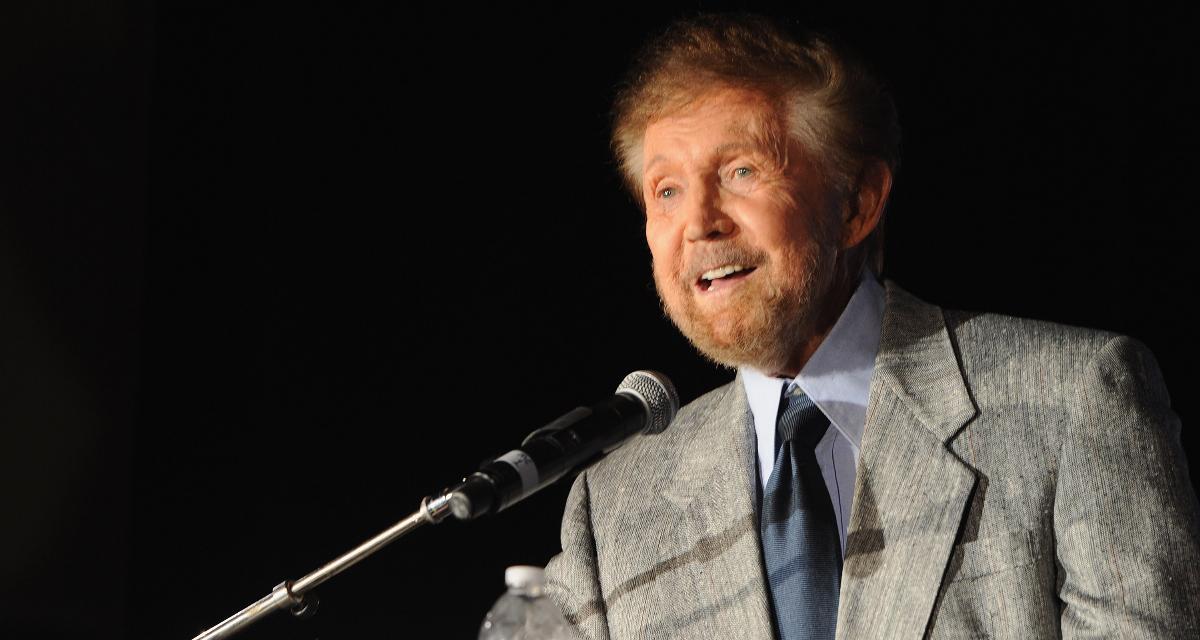 Sonny James speaks at the International Entertainment Buyers Association Conference and Hall of Fame on October 4, 2011 in Nashville, Tennessee. (Photo by Rick Diamond/Getty Images for IEBA)

Country music star Sonny James died on Monday, February 22 at the age of 87. According to a statement released on his official web site, James was recently hospitalized at Alive Hospice in Nashville, Tennessee, passing away there from natural causes and in the presence of his friends and family. Plans for his funeral and will, which will likely disperse Sonny James net worth of $4.0 million among his family, have yet to be set or publicly announced.

The man who would come to be known as Sonny James (he was born James Hugh Loden) impacted country music charts for almost two decades with appearances near or at the top for 57 weeks. Inducted into the Country Music Hall of Fame in 2006, James had his first major hit in 1956, going on to have 26 singles at number one, 16 of them doing so consecutively over five years, a milestone that has yet to be repeated or topped.

In relation to his music, Sonny James also had a notable television career, making many appearances performing on the era’s popular broadcasts, as well as being a member of the Grand Ole Opry. He was also the first country recording artist to get a star on the Hollywood Walk of Fame and, in a rare honor, the first country artist asked to record material specifically for a flight to the moon.

Described as deeply spiritual and very close to all his friends, Sonny James lived a somewhat modest life, only being married once (and staying married), having no children, and retiring with little fanfare, not to mention successfully staying retired and avoiding the pitfalls that many other musicians need to stay in the spotlight.

James Hugh Loden was born on May 1, 1928 in Hackleburg, Alabama to farm owners. His parents being amateur musicians and his sister, Thelma Lee Loden Holcombe, able to play several instruments and sing, James (dubbed “Sonny Boy”) was quickly thrust into the world of music as well, playing the mandolin as early as age three. In 1933, he and his family auditioned on a radio show, which led to being offered to appear every Saturday on a station in Muscle Shoals, Alabama. They were later joined by Ruby Palmer, who his parents had offered to raise, and the family would move on to playing at schools, theaters, and auditoriums across the southern U.S.; however, they always returned to work on their farm, treating their act as only a part-time gig.

Several years later, Sonny James’ father decided it could be a full-time job, leasing out the farm and serving as a daily early morning act on a local radio station, later appearing on several others. In 1949, both girls (his sister and Ruby Palmer) married (in a double ceremony) and left the group; replacements were found, but ultimately the act disbanded soon after. James’ parents went on to open a clothing store, where James would work while finishing high school. By 1950, James was on the radio again, this time as part of a different group, usually on guitar but sometimes serving as vocals. However, he would soon be called to participate in the Korean War in September 1950.

A Quick Return to Music

After being honorably discharged and coming home in 1951, Sonny James was signed to Capital Records, thanks to assistance from “Nashville sound” creator and former roommate Chester Burton “Chet” Atkins. An executive, Ken Nelson, suggested the name change to “Sonny James” during this time, because he believed several popular musicians with the name “Loden” already existed and “James” would be easier to remember, even for small children.

James would enjoy a reasonably successful career for the next few years, releasing songs that did decently on the charts, if not spectacular, and seeing good turnouts at his live shows, which he used to further hone his craft. He also kept up his radio appearances before transitioning to TV, which was new at the time, becoming a regular on ABC’s Ozark Jubilee in 1955.

The year 1956 saw James’ first huge hit single, “Young Love,” topping both country and pop charts in the U.S. The album would actually sell out; Capitol Records had not expected the demand and failed to make enough copies. It ultimately sold over a million copies and led to further exposure and appearances on the likes of The Ed Sullivan Show and Hee Haw, all of which contributed a great deal to Sonny James’ net worth. A year later, his life would only get better as he married his sweetheart, Doris Shrode.

Sonny James left Capitol Records in 1959 to refine his sound, singing with various labels and even becoming a member of the Grand Ole Opry before signing again with Capitol in 1963. Serving as the main act in country music from 1964 to 1967—1964 was when he found his sound, thanks to his new accompaniment, and 1967 would mark the beginning of his streak of chart-topping hits, which began with “Need You” and ended with 1971’s “Here Comes Honey Again.” In-between, he also did some producing work for other talents, including helping to start Marie Osmond’s career in 1973.

With his $4.0 million net worth and loving wife by his side, Sonny James retired in 1984, his only major public appearances after that being his yearly attendance of the Neighbor Day Festival in his hometown of Hackleburg. He would then remain out of the public eye until his unfortunate natural passing this week. With the musical legacy he has left behind, Sonny James is sure to be missed.