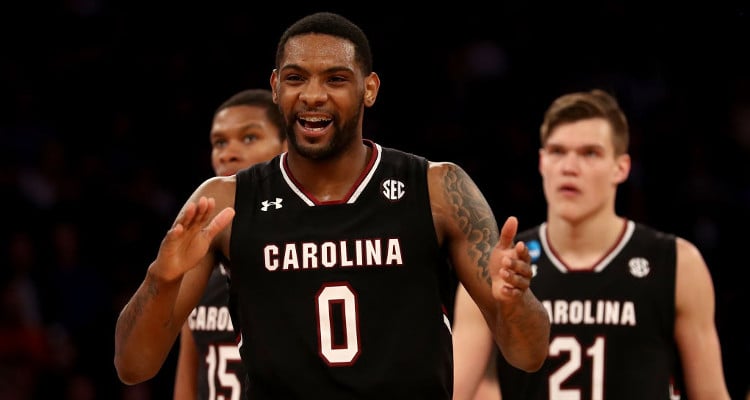 Sindarius Thornwell is a making a name for himself in the NCAA Tournament. The young player has led his team, the South Carolina Gamecocks to the Final Four, which is a first for the team. Naturally, the state is taking notice of this player with star potential.

Sindarius Thornwell has caught the attention of those in the world of basketball. Where Thornwell goes, the Gamecocks follow, and Thornwell is leading his team to the Final Four of the NCAA Tournament. This is the first time that the University of South Carolina has made it this far in the NCAA under coach Frank Martin. They now have a shot at winning the national championship for the first time after defeating the Florida State Gators. Let’s turn the spotlight on the man who made it possible in Sindarius Thornwell’s wiki.

Sindarius Thornwell is a South Carolina native, born and raised there by his parents, Greg Wade and Sharicka Thornwell. According to the Gamecocks web site, he has a sister named Quasheka and a brother named Quantavious. He attended high school in Lancaster for three years, before he transferred to Oak Hill Academy during senior year. At Oak Hill, he averaged 26.8 points per game and averaged 8.6 rebounds and 3.6 assists, as well.

His basketball journey began in high school when he attended Lancaster and then transferred to the prestigious Oak Hill that is a known NBA player factory. The Virginia school has given some famous alumni in many fields, including basketball. New York Knicks’ Carmelo Anthony, Junior Burrough from the Boston Celtics, and Washington Wizards’ Brandon Jennings all graduated from Oak Hill. Whatever the reason Thornwell had to transfer to Oak Hill, it certainly turned out to be a good decision for him!

With such good stats, Sindarius Thornwell has a bright future in basketball. However, when he committed to the University of South Carolina at the age of 17, many thought he was putting his future on the line. Many tried to talk him out of it, saying that there were better schools than USC (which hadn’t won an NCAA tournament since 1973).

“When I first met coach I just got the feel of the way he was and he didn’t even care about winning as much as he cared about me as a person and developing as a man on and off the court. That’s what you want because you’re only going to be here for four years,” he said before his game against Florida. “ I feel that’s going to carry me to be successful after South Carolina and that’s what it’s all about,” he added. Now, the Gamecocks have gone the furthest in their program history, fueled by Thornwell’s skills.

Being a senior, the 6’4″ “Sin-Derella” is eligible for this year’s NBA draft. The efficient guard has already piqued the interest of NBA scouts in two rounds of the NCAA. Thornwell beat out an impressive slate of opponents. Since winning against strong rivals like the Marquette Golden Eagles and Duke Blue Devils, his name has landed on the second round list of the 2017 NBA draft. Thornwell’s draft prospects include the Boston Celtics and the Milwaukee Bucks.

But the reigning SEC player of the year has one rival standing between him and an NBA career —his fellow Gamecocks guard, PJ Dozier. The sophomore can declare for the draft and participate in the NBA Combine, before returning for his junior year. Many draft analysts believe he’s the better pick of the two.

Sindarius Thornwell is still a student and hasn’t signed a contract just yet, so his net worth hasn’t been calculated. Nonetheless, his NBA prospects look good and he could be making big bucks real soon!

#4. Suspended from the Team

In December last year, USC coach Frank Martin suspended Thornwell indefinitely, due to violating an athletic department policy. The exact reason wasn’t disclosed, with Martin calling the 22-year-old’s transgression a “mental mistake.” At the time, his coach warned reporters that he would walk out of a press conference held after the game if asked about it.

Thornwell would enter the court with his teammates, do warm-ups and sit on the bench. He had to sit out for six games, during which both the Gamecocks and Thornwell suffered. According to some news outlets, his suspension had to do with Thornwell’s arrest earlier that year.

In May 2016, Thornwell was arrested for possession of marijuana and driving with a suspended license. According to the report, the arresting officer pulled over Thornwell’s Chrysler when his aggressive lane change nearly side-swiped another vehicle. After checking his driver’s license, it was found that it was suspended after failure to pay two parking tickets. Thornwell was booked at the Lexington County Detention Center and had to pay a fine.

It’s not known whether his suspension from the game stemmed from his arrest, but Sindarius Thornwell says he came out of it humbled and motivated. “I just felt like I disappointed coach and I let him down because I knew my team relied on me,” he said. “I just had a mindset when I came back of just giving them all I’ve got every game until the season is over.” It looks like he has redeemed himself as coach Frank Martin only has praises for his star player now.