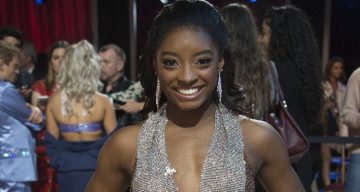 Simone Biles has won millions of hearts with her spectacular performance in the 2016 Rio Olympics and she is bound to enchant the audience and judges of Dancing with the Stars. During the season 24 premiere of Dancing with the Stars, Simone cemented her position as an early front-runner, as she and her dance partner, Sasha Farber, earned the highest score with their first dance.

For their first performance, they danced the tango and received total score of 32 out of 40. Whether or not you saw their mind-blowing performance last night (March 20) you may want to learn a few things from Simone Biles’ wiki. We have some interesting facts you need to know about Simone Biles from Dancing with the Stars.

"A dog is a part of your life & you are everything to a dog's life, remember that" You were my first dog, the dog I begged & begged my parents to get. So you were my present when I made level 9 Westerns, I got to name you (Maggie). We grew up together. The craziest most unbothered dog!! You were amazing❤️ Have fun in Doggie Heaven Maggie Maggie🐶💔🐾☁️ I love you!

Simone Arianna Biles was born on March 14, 1997, in Columbus, Ohio. One of the best gymnasts in the world turned 20 last week. Simone Biles’ height is only 4’8″! Her childhood difficult as her mother was unable to take care of her children due to a drug and alcohol addiction. Simone’s father left his family and also struggled with addiction. After being in and out of foster care, Simone’s maternal grandfather, Ron and his second wife Nellie stepped in and cared for Simone her youngest sister Adria, as well as both of her older siblings, Ashley and Tevin in 2000. Three years later, the couple officially adopted Simone and Adria, and Ron’s sister adopted Ashley and Tevin.

So excited to make my @SI_Swimsuit debut in the 2017 issue! https://t.co/KVGM0T7LDK | So happy to be a part of the Sports Illustrated swimsuit edition. Where athletes bodies can be beautiful too. No matter what anyone tells you, have confidence in your own body. OWN IT 🖤 Thanks you @mj_day for the oppurtunity!

At the age of six, Simone first tried her hand in gymnastics while on a field trip with her day care. The instructors there suggested that she continued with gymnastics, leading Simone to enrol in an optional training program at Bannon’s Gymnastix. At the age of eight, Simone started training with coach Aimee Boorman. All that training was preparation for the 2016, Olympics, where Simone Biles won a total of 19 Olympic and World Championship medals, setting a record for winning the most gold medals in women’s gymnastics.

Simone Biles’ net worth is estimated to be around $2.0 million in endorsements and prize money. Truly, Simone’s dedication to gymnastics is a strong motivation for people all over the world. In 2016, Forbes included Simone in their list of Top 10 Rio Olympics Marketing Stars. Now that she is a part of Dancing with the Stars, as well as her hard work and determination, her net worth will definitely see a boost, whether or not she wins the show. Sources have reported that the contestants on DWTS earn approximately $125,000 just for signing and participating in the first two episodes. The contestants who make it to the final round get around $50,000.

The 20-year-old gymnast made her presence known on the Dancing with the Stars stage by earning the highest score for her first performance with her pro-dance partner Sasha Farber. They did the tango to the song “Untouchable” by Tritonal & Cash Cash. As a gymnast, Simone Biles has a slight advantage on the show, one that her dance partner looks forward to working with as the season kicks off.