J.R. Smith #5 of the Cleveland Cavaliers on Media Day at Cleveland Clinic Courts on September 24, 2018 in Independence, Ohio. (Photo by Jason Miller/Getty Images)

J.R. Smith, who last played for the Cleveland Cavaliers, is in the center of some relationship drama right now. The NBA player’s wife, Shirley “Jewel” Harris, accused him of cheating on her with The Flash star Candice Patton. If you’ve been keeping track, rumors about the current free agent and Patton dating have been doing the rounds for weeks. Now the focus is on Jewel and her allegations. Our Shirley Jewel Harris Smith wiki elaborates on the cheating drama right here.

Jewel Harris Is from New Jersey

Born Shirley Marie Harris on August 8, 1984 to Erics Brown and Bertina Harris, she hails from New Jersey. Her father is a drummer who once performed with Whitney Houston and is based in Florida.

Join us in wishing Dropping Jewels' very own, Shirley "Jewel" Smith, a very HAAAAAPPY BIIIIRTHDAAAAY!!! 🎂🎈🎉 May God continue to bless her and allow her to be a continued to be an inspiration to the all girls & women. Also, a Happy Anniversary to her & hubby, JR Smith! 🥂🍾 We hope that they enjoy their day, today! Leave them some well wishes, below! . . And in honor of her birthday, she is asking for donations to Dropping Jewels, LLC as we prepare to bring workshops, seminars & conferences to encourage, inspire, motivate & coach girls & women in the inner cities to boost self-esteem & worth. https://paypal.me/droppingjewels . . #DroppingJewels #Jewey808 #JewelSmith #ShirleySmith TeamSwish #InspiringWomen #InspiringGirls #EncouragingWomen #EncouragingGirls #LoveYourself #Grow #Learn #wholeness

Bertina raised her daughter Shirley and sons Darryl Glover and Tokunbo Borishade in Newark. She passed away in March 2006.

Shirley Harris, who currently goes by “Jewel,” graduated from Hillside High School, where she was the cheerleading co-captain. She went on to study sociology at Kean University.

After moving to Cleveland, Ohio when J.R. Smith signed with the Cavaliers, she enrolled at Cleveland State University, where she majored in Urban Studies with a minor in Organizational Leadership.

J.R. Smith and Jewel Harris were reportedly in an on-and-off relationship for a long time before reuniting in 2015. They were already raising two daughters, Peyton and Demi, together.

When they reunited, Smith proposed, and they decided to get hitched that same year. They had a first wedding ceremony on August 8, 2016, Harris’ 32nd birthday and shortly after Smith won his first NBA championship with the Cavs.

They then went back to their New Jersey hometown to marry with their daughters and Smith’s Cavs teammates, including Tristan Thompson, in attendance. But their social media pages hint that they have been married since 2015.

Harris Started an Organization in Her Prematurely Born Daughter’s Name

Harris and Smith welcomed two more additions to their brood, including Dakota on January 2, 2017 and Denver in 2018. But it was Dakota who would become their miracle baby.

Born at only 22 weeks, Dakota was five months premature and weighed only a pound at birth. Dakota received the best care in Hillcrest Hospital’s NICU in Mayfield, Ohio.

With Smith on the road with the Cavs, Harris stayed with her newborn daughter in the hospital. The parents documented the progress of Dakota’s health on Instagram, including the first time Smith got to hold her in February. In May, Dakota was strong enough to go home with her parents and sisters.

Harris shared their miracle baby’s story with the intention of giving other parents of premature babies hope and encouragement. That also became the story of Harris setting up the non-profit, My Kota Bear, named after Dakota, who she calls “Kota.”

Morning Smiles from us to YOU….and it’s free…ain’t that right @_mykotabear 🤣

My Kota Bear holds fundraisers and donations for NICU Families. The money goes towards NICU care for premature babies and setting up better facilities.

Harris Accused Smith of an Affair with Candice Patton

Around Halloween this year, a few months after J.R. Smith was waived by the Cavaliers, rumors began swirling that the current free agent was dating Candice Patton, who stars in CW’s The Flash. Hawk-eyed Internet users concluded they are in a relationship from a few social media posts.

The people involved didn’t comment on this rumor for weeks, until Jewel Harris became the first to break her silence. And in a dramatic way!

Taking to her Instagram, Harris shared an in-car prayer mentioning J.R. and “Candice” (though she didn’t state Candice’s last name) and their alleged affair.

“God is mad wild,” Harris says at the start of the video. “There’s a lot going on…Help me God. So, as I was taking Demi to school, God was like ‘Yeah, you gonna pray and you’re gonna post it.’

“God, I would like to lift my husband up and ask you, Lord Father God, to please just cover him with your blood,” she went on to pray in the car. “I ask in the mighty name of Jesus that you go to him where he is right now and you shake him up, God. You shake him up and you stir him up…I ask that wherever he is broke, you fix him [and] you heal him.”

Jewel proceeded to namedrop Candice, saying, “My husband, he’s hurting and Candice, she’s hurting…For her to go out here, Father God, and seek a married man, I just pray that you give her grace and mercy through all of this.”

While Patton has yet to respond, J.R. had an initial response to Harris’ allegations. In his own Instagram stories, he wrote “IG ain’t a place for relationships!! But God told me to tell y’all I’ve been separated for months [sic].” 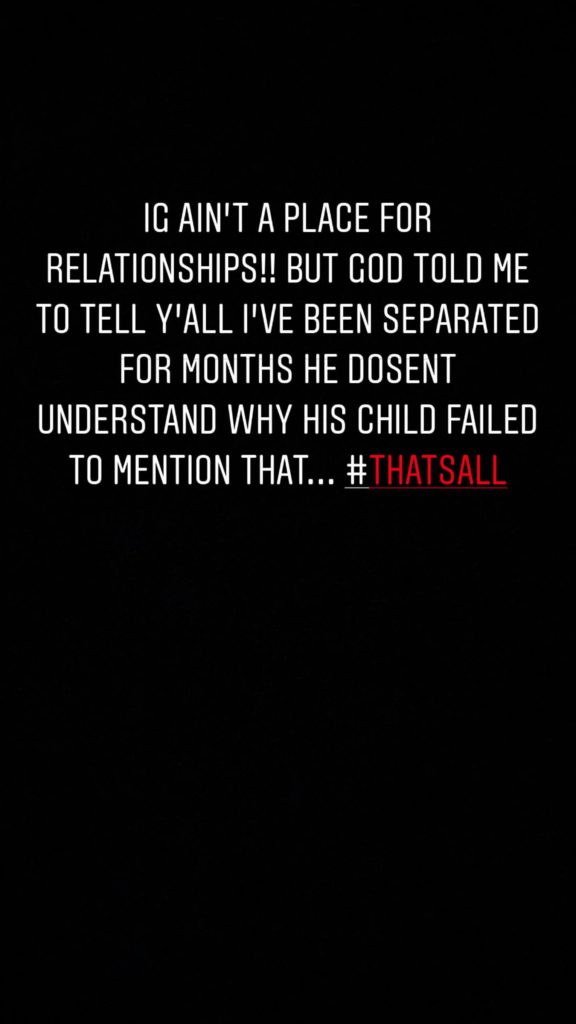