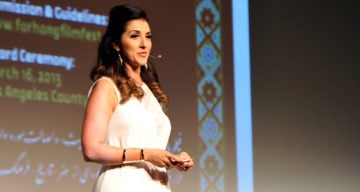 Sacramento residents are familiar with the vibrant news anchor, Shirin Rajaee, on CBS 13. A major presence in the community, she has covered every major local news story for the CBS News affiliate. Her amazing work certainly warrants this Shirin Rajaee wiki!

Shirin Rajaee was born on January 17, 1982, so that makes her 37 years old now. Born and raised in Los Angeles, California, she’s of Iranian descent.

Going by her Instagram posts, Shirin grew up in a very close-knit Persian family.

Her parents, Mike Rajaee and Heidi Ravai, are both originally from Iran. Shirin’s father came to the U.S. to study at California State University, Los Angeles. Her mother graduated from the National University of Iran before moving to America.

Thank you for all the sweet birthday messages, texts, calls, hugs, flowers, audio recordings… I’m truly so blessed to have so many amazing, positive people in my life! I don’t take any of it for granted. It means the world to me! Love you all!!!! #January17 #Januarybaby #love #family #friends #17

Shirin’s brother, Sean Rajaee, is an orthopedic surgeon based in Los Angeles.

The news anchor is fluent in Farsi and knows conversational Spanish. Shirin has often displayed her pride in her Persian heritage on social media.

Diane Sawyer Inspired Shirin to Be a Journalist

When she was a teen, Shirin Rajaee found her calling when she saw the legendary Diane Sawyer on TV.

“Watching the news was big in my household and I remember watching Diane Sawyer and thinking ‘I want to do that one day,’” she said. “I knew I was a people person, I knew I loved to write and tell stories and the thought of being on scene of a big event, intrigued me.”

After graduating from Arcadia High School, she acquired a BA in communications and journalism from UCLA. In college, Rajaee interned at NBC in Burbank.

Shirin Rajaee Is a Reporter at CBS News in Sacramento

For those who don’t get to see me in action, A few anchoring clips from last night’s 10pm news! @callkurtis @cbssacramento #anchor #news #cbs #yellow 💛💛💛

Shirin Rajaee first step into a newsroom as a professional in 2008 when she got a job at CNN. She was an associate producer and assignment editor and worked on Larry King Live, Issues with Jane Velez-Mitchel, and Showbiz Tonight. Around the same time, the young woman was an entertainment anchor at Calabasas-based PBC (Persian Broadcasting Company).

After four years at CNN, Rajaee came to the ABC News Santa Barbara station, KEYT News Channel 3. Since 2015, she has been a weekend and weeknight news anchor at Sacramento’s CBS 13.

Don’t Miss: Facts About the CBS Reporter Paula Reid, Who Fact-Checked Trump to His Face

Shirin Rajaee has been dating Joe Khalil for a few years. Khalil is well-known as the news anchor on Sacramento’s Fox affiliate, FOX40.

Khalil, who’s of Lebanese descent, is a direct rival to Rajaee, being on air during the same hours as her. But the couple engage in healthy competition. Plus, it’s likely their matching time slots help them coordinate their schedules.

We go head to head each weekend… at the exact same time on different networks. But hey, a little competition never hurt nobody. 😉 Bring it on Khalil. #gameface #buildingourempire #bae

Shirin Rajaee’s Brother Sean Rajaee Was in a Viral Video

Shirin’s brother Sean went viral in 2014 for going above and beyond at his wedding. Sean and his groomsmen surprised his bride with a choreographed dance routine complete with props.

The sharply suited guys performed to Beyoncé’s “Crazy in Love,” Destiny Child’s “Bootylicious,” the Backstreet Boys’ “I Want It That Way” and Bruno Mars’ “Marry You,” and also did a Persian dance.

The video of Shirin’s brother shaking a leg was a viral hit globally and covered by major news outlets. The news anchor shared her brother’s performance on her YouTube channel where it has raked in over 28 million views.

Even the official Backstreet Boys Twitter handle shared the video.

Weddings that include IWITW often lead to a lifetime of happiness 😉 Kidding.. but we wish these guys all the best! http://t.co/OFp0bwNZvY

“When I saw a lot of his moves it took me back to our childhood days because I’d force him to listen to Beyoncé and ‘N Sync,” Shirin said of her brother’s performance.

And the Rajaee siblings are clearly great dancers. Shirin won the local version of Santa Barbara’s Dancing with the Stars in 2015.