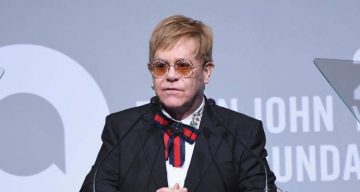 Who Was Elton John’s Mother?

Sheila gave birth to Elton John on March 25, 1947, and he was born Reginald Kenneth Dwight, in Pinner, Middlesex, England. She divorced Stanley Dwight (Elton’s father and Sheila Eileen Dwight’s husband) when Elton was a teenager. Stanley was a member of the Royal Air Force and taught his son how to play the piano. He and Elton had a strained relationship due to the kind of future Elton wanted for himself. As for Sheila Eileen Dwight’s kids, Elton was an only child.

Dwight, 92, (who also goes by Sheila Farebrother) has two grandchildren via surrogate, by Elton and his husband David Furnish. They had been partners for a long time until they got married in a civil ceremony on December 21, 2015 and their son Zachary Furnish-John was born in December 2010. They later welcomed their second child, Elijah Joseph Daniel Furnish-John in January 2013.

After an explosive fallout in 2008, for nearly a decade, the British singer and his mother weren’t speaking. It reportedly began because she refused to part ways with two of his oldest friends, Bob Halley and John Reid, after he was no longer in contact with them.

Farebrother told the Daily Mail in a past interview, “‘I told him: ‘I’m not about to do that and drop them. Bob is like a son to me. He has always been marvelous to me and he lives nearby and keeps an eye on me.’ ”

She added, “Then to my utter amazement, [Elton] told me he hated me. And he then banged the phone down. Imagine! To me, his mother!”

Dear Mum, Happy Mother's Day! So happy we are back in touch. Love, Elton xo

They had since reconciled on her 90th birthday with a post saying, “Out of respect for my mother’s privacy, I have always shied away from speaking publicly about our relationship,” he said. “However, I can say that we are now back in touch and have been so since my mother’s 90th birthday.”

How Did She Die?

Through Instagram and Twitter, the 70-year-old singer informed fans of his mother’s death saying, “So sad to say that my mother passed away this morning. I only saw her last Monday and I am in shock. Travel safe Mum. Thank you for everything. I will miss you so much. Love, Elton.”

The details of her death were not revealed by John and at the moment details of the funereal have not been released. Fans have continued to give their support and well wishes to John and his family after hearing the news.

So sad to say that my mother passed away this morning. I only saw her last Monday and I am in shock. Travel safe Mum. Thank-you for everything. I will miss you so much. Love, Elton