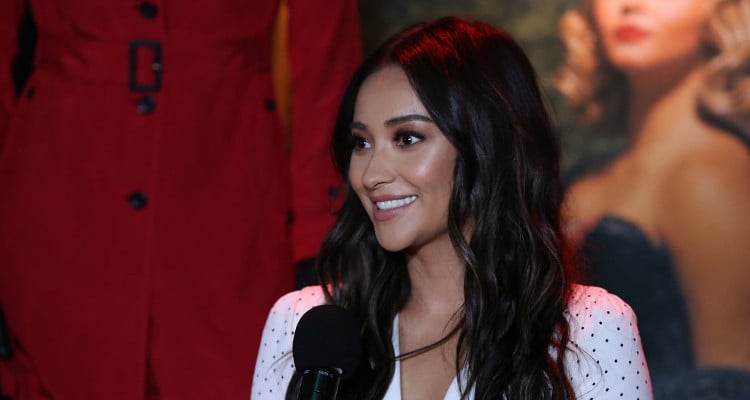 Now that the suspense and drama has come to an end with the Pretty Little Liars finale, the stars appear to be enjoying a much-needed break. Shay Mitchell is at least, and she’s turning up the heat in Greece! Was there a certain Matte Babel vacationing with her?

Oh my Shay! The Pretty Little Liar has escaped to Greece for the 4th of July long weekend. PLL aired its series finale last week and she wrapped up filming for her upcoming horror flick, Cadaver with Castle’s Stana Katic. So, she deserves a vacation! And she sent the Twitterverse into a frenzy when she hit a nudist beach! Is she living the glamorous single life or does she have a boyfriend? Shay Mitchell started 2017 with boyfriend rumors. Who is Shay Mitchel dating? Take a look at her dating timeline right here to find out!

The singer and actor is best known for playing Jake Puckerman in Glee. Mitchell tweeted a flirty photo of herself in 2013 with Artist, which set off dating rumors. She even shared a photograph of them at Disneyland together! But Artist and Mitchell weren’t alone. Her co-star, Keegan Allen and more friends were there, too. In the end, these rumors seemed to be just that; rumors.

Allen played Toby Cavanaugh in PLL, who was one of Emily Fields’ (Mitchell) best friends. What’s funny, is that the two are actually besties off-camera, too! They are not only featured in each other’s social media, but there are also several pictures of them being chummy behind the scenes of PLL. It’s no wonder that Mitchell and Allen are still rumored to be in a relationship, look how close they are! But there’s nothing here folks, these two are just buddies.

Silverstein is best known for running within Drake’s inner circle. His day job involves hanging around Drake as his assistant, and he was even in his music video for “Started from the Bottom” in 2013. Mitchell went public with their romance when they were spotted on a romantic date in a West Hollywood restaurant. He celebrated the Canadian actress’ 27th birthday with her co-stars, where he made a toast to her.

They were going strong until the two parted ways a year later. Sources claimed that they had been fighting throughout their relationship. After they split, Mitchell was reportedly getting closer to a model named Gui Fedrizzi after they did a photoshoot together.

The 30-year-old actress ushered in 2017 with a new romance rumor. She shared several selfies with Matte Babel on Snapchat, leading her fans to believe that they could be dating. Babel is also from Canada and works as a TV host and music reporter. Many Canadians would remember him as a VJ on MuchMusic a few years ago. The two look super cozy in their selfies together, and Mitchell loves posting them on social media. So, the uber cute photos and adorable snaps have to mean something, right? Here’s hoping!

Though the couple hasn’t confirmed anything, a source has said they are dating. Babel was on his way to becoming a lawyer until he found his calling in front of the camera. Interestingly, he is also a good friend of Drake. You know who else is? Mitchell’s ex, Ryan Silverstein! We wonder if there was an awkward encounter when Babel and Mitchell went to Drake’s birthday party last year.

Regarding the attention her pictures with Babel are getting, Mitchell said, “It’s funny because I love this stuff and if I put something out on social media I’m more than happy to answer questions about it. If I don’t want to talk about it it’s not on my social media. We’ve known each other for nine years. We knew each other in Toronto. Like Drake and all them, it’s a Toronto crew. We’re really, really awesome friends.” Nevertheless, they continue to show their love for each other on Instagram. We’re thinkin’ this “friendship” might be able to blossom into something more, so we’ll keep our eye on these two for now!

Happy Birthday to the one who makes me smile and always seems to find the rosé (or Hennessy) – @shaymitchell ?