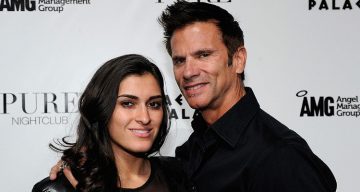 Second Wives Club follows the lives of women, who are married to previously divorced men. They navigate through the baggage that these men bring, but none more so than Lorenzo Lamas’ wife, Shawna Craig.

She Isn’t a Second Wife

SWC is all about the women who are in a relationship with previously married men, but not all the husbands on the show were married just once. Lorenzo Lamas was married four times before tying the knot with Shawna Craig, and has six children from his previous marriages.

He was then in a relationship with actress, Daphne Ashbrook. They have a daughter named Paton, who was born in 1988 and takes her mother’s maiden name as a professional actress. His third marriage was in 1989 to Kathleen Kinmont, daughter of his Falcon Crest co-star, Abby Dalton, but they divorced in 1993.

Lamas married Playboy‘s Playmate of the Month, Shauna Sand in 1996. He and Sand have three daughters together: Alexandra Lynne (19), Victoria (18), and Isabella Lorenza (16). The couple divorced in 2002. He was briefly engaged to Barbara Moore, but that was called off and he later married Shawna Craig.

Once they married, he changed his last name to Lamas-Craig since his previous wife had the same name as his current wife —with a slightly different way of spelling it. Shawna didn’t want to take his surname and have the same name as his ex-wife, so Lorenzo took her maiden name.

Craig worked as a model and aspires to be an actress. She put her career on hold for her marriage, but had quite a few acting credits in films like, Manfast, Quarantine L.A., A Little Christmas Business, Cry Baby, Story of Eva, Secrets of Deception, and All About the Money.

She has also hosted and acted on TV for shows like Private Chefs of Beverly Hills, Nail Files, Celebrity Wife Swap, Tattoo Nightmares, and Hell’s Kitchen.

She was a Surrogate for Her Step-Daughter

Craig is stepmother to Lamas’ six children, but we wouldn’t say she’s the stereotypical evil stepmother. She went the extra mile for her husband’s children, especially for his eldest daughter, Shayne. The former Bachelor star married Nik Richie after her split from Bachelor Matt Grant. The couple have a daughter together and tried for a second child.

Sadly, Shayne suffered a miscarriage during her second pregnancy and was devastated. Shawna Craig comforted Shayne when she learned that she couldn’t get pregnant again, and to help Shayne, she volunteered to be a surrogate. As a result, Shawna Craig gave birth to her step-grandson, Lyon Lamas-Richie in 2015.